Clamming Around Part I: The Basics of Tridacnidae 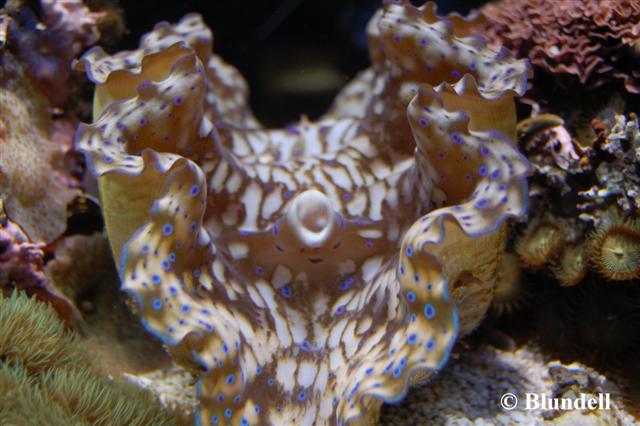 Giant Clams are amazing. Let me just start by saying that. The members of the family Tridacnidae are also known as the Tridacnids or as the Giant Clams. These animals are truly amazing. Within the phylum Mollusca there are about 115,000 species on Earth, with 30,000 of them contained in the Bivalvia class (Bivalves). Of those 30,000 bivalves a whopping 8 belong to the Family Tridacnidae. It is safe to say that in the grand scheme of things they are certainly oddities. That isnâ€™t to say they are rare in numbers of individuals, just odd from an evolutionary standpoint.

Tridacnids are amazing for several reasons. To me, the most underappreciated fact is that they are photosynthetic.Well, that is to say they contain zooxanthellae which are photosynthetic. I wonâ€™t go into zooxanthellae here because Iâ€™m sure the readers of this article are quite familiar with symbiosis systems from their experience with corals. And that is just my point!Zooxanthellae and corals go together like peanut butter and jam. Zooxanthellae and clams go together like peanut butter and ice cream; it isnâ€™t that common but it works for a few. The fact that these moluscs have developed the ability to house zooxanthellae is truly unique. In fact clam guru James Fatherree has clearly stated that the zooxanthellae found in Tridacnids is able to produce all of the energy needed by these animals (Fatherree 2006). This makes them a perfect candidate for home aquariaâ€¦ which weâ€™ll get to later.


What has a heart and kidneys but no brain?….. you guessed it, a Clam.
Clams â€œworkâ€ by letting water flow into their mantle cavity through an inhalant siphon and then out an exhalent siphon. While inside the mantle cavity the water passes by the gills and allowing for gas exchange and for nutrient collection.
How exactly does the water move through the clam? Well it is possible that a clam could use muscular contractions to push water (and indirectly pull water) into the tissue. This however is something I have not seen.Like many sponges it is thought that as water passes quickly over the top of the clam (near the exhalent siphon) it draws water from within the clam upward. As this water moves out of the clam the surrounding water would flow into the inhalant siphon to take its place. This may be working but it would seem that orientation would be important (meaning does the clam face forward, sideways or backwards to the direction of the current). According to Fatherree (personal communication in 2007) this orientation does not appear to be important in clam health and growth.Indeed many photos Iâ€™ve seen show up to a dozen clams all living right beside each other and all scattered about without any form of direction.


I can safely say that all clams eat.They eat phytoplankton and zooplankton.Anything small that passes into their inhalant siphon is fair game. However, that is (or at least can be) a very small portion of their energy intake. Clams house zooxanthellae and the zooxanthellae (remarkably) have the ability to meet all the energy requirements of a clam.Donâ€™t believe me? Look it up (Fatherree 2007).

Clams grow to a maximum size that is fickle.Genetics certainly play a huge role in this.Some species of clams are just big (T. gigas) and some are just small (T. crocea). However within each species there is a great amount of variation. Please, donâ€™t look at the maximum size a clam can reach and hope for that. It would be far better to look at the average size of a species, but even that is a guess. Many clams grow quickly in an effort to reach reproductive size. Once there, the need to grow takes a back seat to the need to reproduce. Think of this as clam libido kicking in. 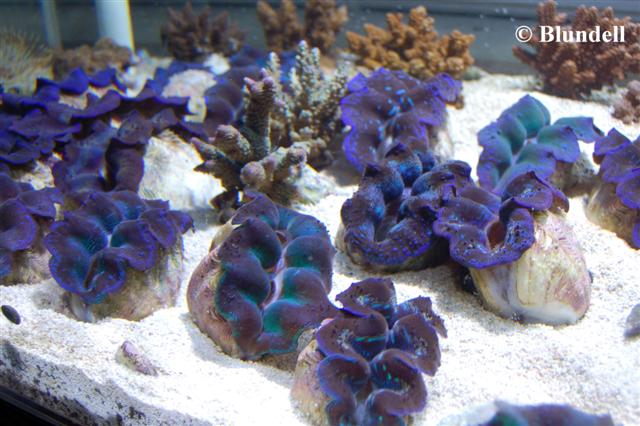 Aquarium Husbandry
Clams are the ideal reef tank inhabitant. They are aquacultured, easy to keep, ship well, easy to feed, and non aggressive. Some aquarists also like the fact that clams are often quite beautiful. Here are some quick tips and thoughts regarding clams:

1- if you buy a large clam from a local pet store it is very possible that it has already reached its maximum size. For smaller clams they often grow quite quickly and require a lot of calcium and carbonate, so check those levels often.
2- clams need halides.
3- clams appear very different when viewed from above and not from the side.
4- cheap, environmentally friendly, and easy to keep

Basic clam husbandry is no different than most reef tanks. While it is possible to keep clams under â€œnon metal halideâ€ conditions it is a sure bet that metal halides will improve your chances of succeeding with clams. In fact many clams live for months under power compact bulbs yet the owner canâ€™t see that the clam is slowly dieing.Get halides and do it right.
Feeding clams appears to be unnecessary. However detritus can be a great food source and some aquarists report phytoplankton as well. These filter feeders can certainly remove organics; they just may not need to.
And finally keep the water clean. Most reef aquarists are familiar with protein skimmers, water changes, and all that goes into keeping nutrient free clean water. This is also very important when keeping clams. Although quite tolerant of pollutants it is recommended the aquarium be kept as nutrient free as can be. 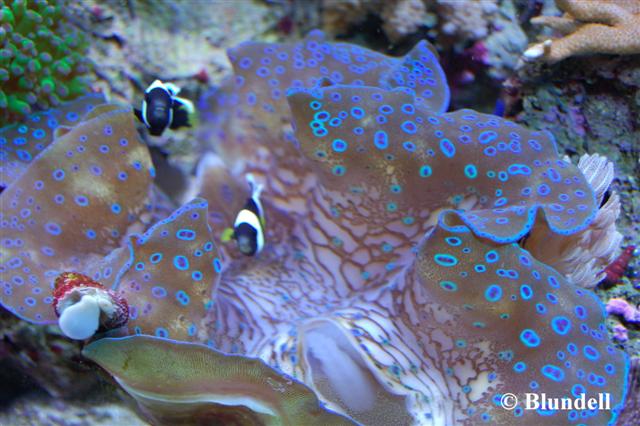 Shown here a pair of anemonefish hosting in a clam

Author Information
Adam Blundell M.S. is a hobbyist, lecturer, author, teacher, and research biologist.Adam works for the University of Utahâ€™s School of Medicine in Pathology and in Marine Biology.He currently helps run the Wasatch Marine Aquarium Society, of which he is a former president.Adam is also the director of the Aquatic & Terrestrial Research Team, a group which bridges the gap between hobbyists and scientists.Adam can be reached by his author forum.