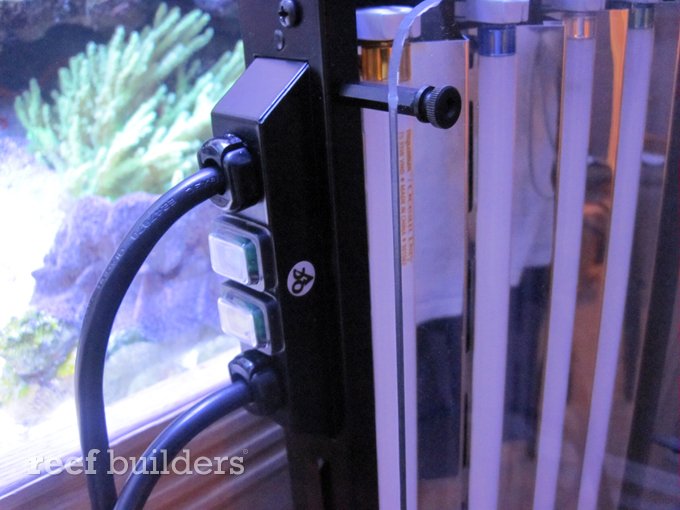 Recently Sunlight Supply unveiled the Tek Wave VHO T5, its new line of VHO T5 hoods designed to run the next generation of VHO T5 bulbs. On first inspection, it looks like a regular T5 set up — same length, same width bulbs, and overall same styling of the hood. It’s not until you actually get to play with the system that the differences become apparent (unless of course you have already turned it on but more on that later). The unit we had to check out is a four bulb system, each bulb is 95W for a total of 380W.

As we intimated above, the new Sunlight Supply Tek Wave VHO T5 hood closely resembles the Tek T5 hoods of old. Overall the design has a similar profile, comprising a black powder coated aluminum structure with slotted vents along the upper sides to allow heat to escape. The mounting hooks are again screw in eyes with the “V” shaped hanging bar — which is good as it allows for easy replacement of an earlier models with this new unit. At first glance the only visible difference is a much improved, and way more substantial looking, power switch and slightly longer cords.

It is not really until the hood is turned over that you begin to realize that this is a new breed of lighting unit. The first key feature we noticed was the fluted holes along the top of each reflector. Kept thin, but long, above each bulb are a series of heat escapes. This really sold us on the Tek Wave. Having run older Tek hoods we can attest to the heat buildup under them. The inclusion of these vents should really assist in the passive convection cooling by allowing upwards airflow across the bulb, and through the reflector. 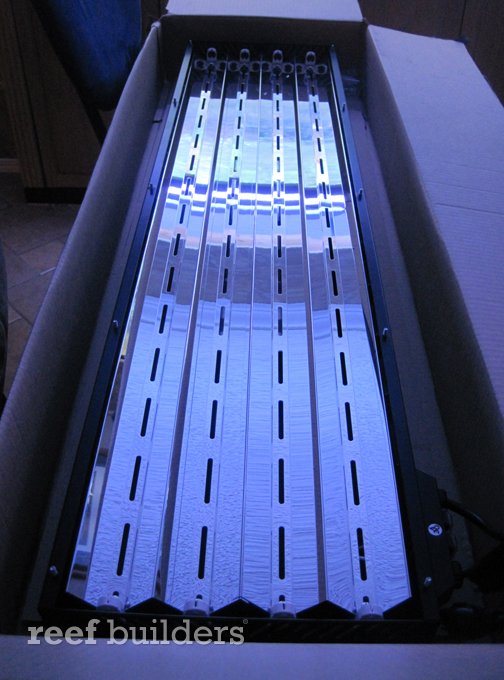 The second feature that lets you know this is something new is that HO T5 bulbs will not fit. The slots for adding bulbs are much thinner on the Tek Wave and this corresponds to flattened connector pins found only on the VHO T5s — a neat safety feature to prevent accidental installation of the wrong bulbs.

Surrounding the lip of the bottom of the hood are a series of exposed screws, these are used to anchor the extension pillars that hold a polycarbonate screen in front of the unit. Aside from looking good, the screen keeps the highly polished reflector and bulbs from being splashed. This keeps the former in good condition, extends its functional lifetime and prevents the latter from possible cracking from cold water on hot glass. Assembly of the mounting bolts and screen took just a few minutes to perform.

So with the fixture all set up and ready to go, you are probably asking how does the Tek Wave perform? Like most of you reading this, we just had to fire it up before adding it to any tank — purely to test that the bulbs were all in place and working before getting it all installed. This may have been a mistake on our part rudely discovering that to say it was bright is very much an understatement. It’s almost impossible to look at when it’s on and after switching it off, you will have to wait a few minutes before seeing anything but “ghost” bars of light.

Over the tank was equally impressive. Typically I run my T5 bulbs about 6 in. above the water level. I did the same with this unit and compared it to my existing six-bulb Tek HO T5 as well as a retrofit four-bulb T5. In each case the Tek Wave easily outperformed the competition. While I didn’t have a good match of bulbs to that which I normally run (I used one each of Ocean Blue, Ocean White, Ocean Day and Ocean Actinic — which gave it a slight yellow cast) it was clear the Tek Wave was much brighter.

Preliminary testing, using the Apogee quantum meter, indicated directly under the unit at 12 in. water depth we were getting average readings of 300 umols of PAR while under the six-bulb hood and the four-bulb retro, values of 230 and 195 were observed respectively. Figuring a rough estimate of light output per watt total gives 0.77 umols/W for the Tek Wave, 0.66 for the six-bulb unit and 0.84 umols for the four-bulb retro. This makes the Tek Wave slightly less efficient than the earlier generation of HO T5s but far more efficient in terms of output per surface area.

In all honesty, the lower efficiency is not likely to be an issue for anyone looking for output. Out of curiosity, we also tested under a 250W metal halide reading 243 units for approx 1 umols/watt — however two MH units are required to cover the same surface as one Tek Wave making the Tek Wave a sure winner.

After running the unit for a week or so, the only true downside we can find is that heat seemed to be trapped under the inside of the unit’s top. After an hour of operation the top gets very hot to the touch across its entire length. In the past this has been a problem with the older Teks, since I would have to move them to get into my tanks and waiting for them to cool was a pain. By touch, the Tek Wave feels hotter.

This could possibly be relieved with the inclusion of heat vents in the top panel in addition to the sides. Having said that — when I examined this unit at MACNA, the top did not feel as hot, and my observation may be a reflection of using the unit in a real life set up as opposed to an open and well ventilated booth. It may be that providing more airflow over and through the unit would alleviate this issue.

These units retail at $399 for the four-bulb unit and provides a cheap and very powerful option for the reefer with a need for light.