Many coral reef fishes are renowned for their spectacular coloration and patterning, but there’s one particular species, commonly available in the marine aquarium hobby, that arguably surpasses them all in this regard. I’m talking about the green mandarinfish (Synchiropus splendidus).

Also known as the mandarin goby (though it’s a dragonet from the family Callionymidae, not a true gobiid), blue mandarinfish, splendid mandarinfish, or simply the mandarinfish, S. splendidus is really indescribable, exhibiting psychedelic swirls, lines, and spots of green, orange, blue, red, and yellow. But, frankly, I can’t do justice to this species’ otherworldly beauty with mere words. To really appreciate it, you just have to look at the accompanying photo or a living specimen.

In addition to its stunning coloration, the green mandarinfish possesses comically bulging eyes and a tiny mouth (which hints at its dietary requirements—more on this ahead). Also, this species is sexually dimorphic, with males generally being larger than females and sporting a greatly extended first dorsal spine. The common maximum length for the green mandarin is about 2½ inches.

I should point out that S. splendidus has an equally psychedelic, similarly sized congener that you might come across at your local fish store—Synchiropus picturatus, commonly known as the spotted mandarinfish, the psychedelic mandarinfish, or, confusingly, the green mandarinfish. The care requirements for both species are pretty much identical, so the following information on S. splendidus applies just as well to S. picturatus as far as aquarium keeping is concerned.

Perhaps the term most frequently used by hobbyists to describe S. splendidus is “hummingbird-like.” And that’s probably as accurate an analogy as one can provide. This fish typically hovers and flits from rock to rock, rapidly fluttering its pectoral fins, in search of the tiny crustaceans and worms that comprise its natural diet—looking very much like a hummingbird or bee flying from flower to flower in search of nectar.

See also  Pac-Pods is a new Superfood from Reef Nutrition

S. splendidus is what I would describe as a “good-news-bad-news” species from the standpoint of aquarium keeping. The good news is, it’s a peaceful, well-behaved fish (with the exception of multiple males kept together) that generally ignores its tankmates. Also, owing to this species’ heavy body-slime production, it tends to be resistant—though, contrary to popular misconception, not immune—to certain ectoparasites, such as Cryptocaryon irritans (“marine ich”). 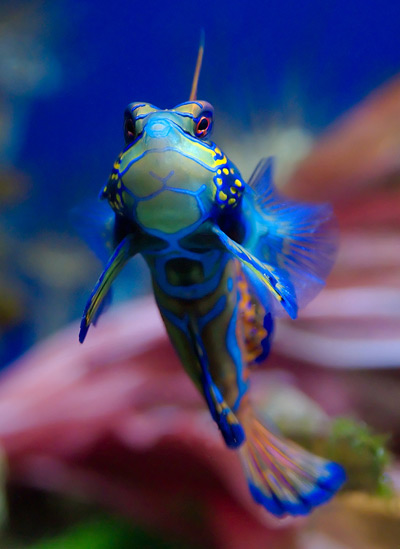 Now for the bad news: S. splendidus has one particular “Achilles heel” that cannot be overlooked or downplayed—it is notorious for starving to death in captivity. You see, wild-caught specimens very seldom learn to accept any food other than live, tiny invertebrates, such as amphipods and copepods (“pods” in hobby parlance). Some do take to non-living foods, such as frozen mysis shrimp, but you can’t depend on it. Even when live pods are available in abundance in an aquarium system, mandarins have the tendency to eradicate them over time, which leaves them vulnerable to starvation.

Does this feeding limitation mean S. splendidus can’t be kept successfully in aquariums? Well, not necessarily. There definitely are hobbyists who succeed in keeping the green mandarin. However, they don’t owe their success to luck or happenstance. They succeed because they make every effort to provide a suitable system and to sustain an ongoing supply of pods.

Quality live rock is typically crawling with pods, so any aquarium housing a mandarinfish must contain an ample quantity of it. In fact, the more live rock, the merrier. For reference, I once kept a green mandarin in a 75-gallon tank with 90 pounds of live rock, and it still managed to pick it clean of pods over time.

What that should tell you is, if you plan to keep a mandarin, it will likely be necessary to replenish the pod population in its tank on a regular basis—even if that tank is fairly large and fairly stuffed with live rock. To achieve this, you can/should:

See also  Are Resting Copepod eggs the next Aquaculture revolution?

Whatever methods you use to sustain the pod population, it’s still important to keep a close eye on your mandarin to ensure it’s getting enough to eat. You don’t want to see your specimen behaving lethargically or developing a pinched-in belly (check for this symptom at the time of purchase, as well). These are clear evidence of advanced starvation.

A very exciting development in our hobby in recent years was the successful captive breeding of mandarins. Captive-bred specimens may be more costly than their wild-caught counterparts, but they have the significant advantage of being raised on commercially available, non-living foods. Thus, they should be considerably easier for hobbyists to feed. That’s not to say they’re “bulletproof,” but I would give captive-bred mandarins much better odds of long-term survival in an aquarium environment.

What’s your mandarin experience?
If you’ve ever kept a mandarinfish, whether wild-caught or captive-bred, please share your experiences—good, bad, or indifferent—with your fellow salties in the comments section below.