For your friends here at Saltwater Smarts, the 2013 Marine Aquarium Conference of North America (MACNA) turned out to be a wonderful opportunity, not only to catch a few pearls of wisdom from leading industry experts, check out some stunning coral frags and fishes, and see all the latest in aquarium technology, but also to finally have some real face time with fellow marine aquarium enthusiasts.

A stellar lineup of speakers

First, we’d like to thank the MACNA 2013 organizers for doing a wonderful job of lining up speakers who touched upon a broad variety of topics. If attendees couldn’t find a presentation to pique their interest, they just weren’t trying hard enough! Also, kudos to Tony Vargas for establishing and sustaining the perfect tone for an enjoyable event, beginning with his introductory comments on Friday morning and continuing throughout the weekend.

The talks Chris and I attended (despite the tight meeting schedule we set for ourselves) proved to be time very well spent, indeed. For example, marine biologist Vincent Chalias offered a fascinating glimpse at his coral mariculture efforts in Bali, which was a hit with conservation-minded reefkeepers.

Kevin Kohen, director of LiveAquaria.com, introduced attendees to a variety of rare, show-stopping fish that sometimes make their way into the marine aquarium trade and discussed how to properly care for them.

The venerable Martin Moe, an industry legend who pioneered many of the techniques used today in the captive breeding of marine species, discussed the challenges and triumphs he experienced in breeding yellowhead jawfish, blackcap basslets, and Diadema spp. sea urchins.

Morgan Moore’s presentation on Caribbean corals was particularly well received by Saltwater Smarts’ own Chris Aldrich—known in certain circles as “Caribbean Chris” (and by MACNA 2013 attendees as “that odd fellow jumping up and down and fist-pumping in the back of the lecture hall”). Something tells me he may soon be upsizing his Caribbean biotope tank to accommodate some of the beautiful species Morgan introduced!

But perhaps the speaker who gave us the most food for thought was Julian Sprung, well-known biologist, author, photographer, aquarium-design consultant, and president of Two Little Fishies. Julian’s presentation on proposed legislation that could have a profound effect on the reefkeeping hobby was a real eye-opener and call to action—and something we intend to cover in much greater detail in future posts (stay tuned!).

One floor up from the lecture rooms at the Westin Diplomat was the MACNA 2013 vendor hall. We spent many hours perusing the various displays there and still didn’t come close to seeing all there was to see. The effort that many of the vendors obviously invested to engage attendees was truly impressive. 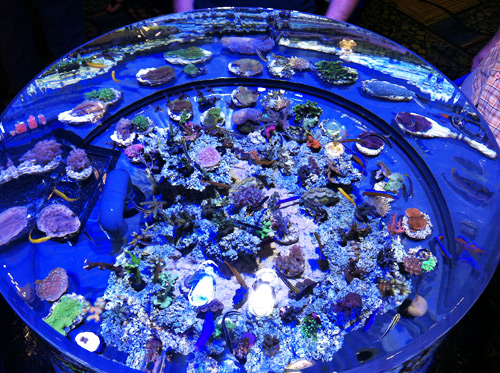 Perhaps not surprisingly, the displays that really caught our attention were those featuring beautiful marine livestock. Of course, there were all kinds of gorgeous corals and other invertebrates to ogle around the hall, but it was two particular cylindrical tanks that stopped us in our tracks and kept us coming back for second, third, and fourth looks.

One of these was ORA’s zero edge aquarium, which was stocked with a variety of their captive-bred fishes and invertebrates. This remarkably crystal-clear tank was just as stunning (if not more so) viewed from above as from the side. Coming in a close second was a tank presented by Proaquatix, which featured a large school of captive-bred lookdowns swimming together in tight choreography. It took a true act of will to move on from both tanks. 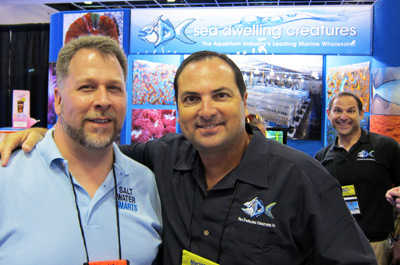 Best of all, though, was having the opportunity to meet and talk with fellow hobbyist, bloggers, and other industry folks who share our passion for this wonderful hobby and the world beneath the waves.

We’d like to thank all those MACNA 2013 attendees who took the time to chat with us, including Kevin Kohen of LiveAquaria.com, Eric Cohen of Sea Dwelling Creatures, Julian Sprung of Two Little Fishies, Josh Saul of Reefs.com, David Hammontree of Reef2Reef.com, Mark Levenson of Melevsreef.com, Morgan Moore of Reefgardener.net, Kara and Philipp Rauch of KP Aquatics, Steve Kinnaird of the Space Coast Reef Club, and many others.

We hope to see you all next year at MACNA 2014 in Denver, Colorado!

Comical crustaceans for your coral cushions - the Periclimenes shrimps