Pseudanthias flavicauda is a member of the “randalli species complex”, where excluding various unnamed species, contains three members. Of which two species, P. flavicauda and P. randalli, are Pacific in distribution while P. pulcherrimus is restricted to the Indian Ocean. The species name “flavicauda” is an amalgamation of the latin words flavus meaning yellow, and cauda meaning tail. The Yellow-tailed anthias is gorgeous by any other name and is not a common find in the trade.

Conventionally found in Fiji and Tonga, P. flavicauda is rare and is seldom offered for the trade. Like its close cousins P. randalli and P. pulcherrimus, the females are very similar looking and can be difficult to distinguish. Males however, are colored differently and are perhaps the most spectacular of the three. This alpha male representation collected outside its typical range from Cairns Marine shows off its gorgeous coloration and its namesake yellow tail.

The psychedelic purple and magenta neon highlights are beautifully coupled with yellow accents on its dorsal region as well as its fins. Like the males of P. randalli and P. pulcherrimus, P. flavicauda possesses on the males, a slightly elongated third dorsal spine. This group of anthias are more stout and and bigger in built compared to their other frilly and more delicate counterparts. They are usually not problematic feeders and acclimate rather well to aquarium life as well as standard fish fare. Coming from deeper waters though, they run the risk of decompression problems. This male and its group of five females however, arrived in exceptional health.

See also  Is This The First Solid RED Elegance Coral?

If you like this species as much as we do, then keep your eyes peeled. With Cairns Marine now offering this species from the Coral Sea, its one more location where you can obtain this immaculate fish. Imagine a stunning male with a group of females chilling under a tabling Acropora. I know I would like that. 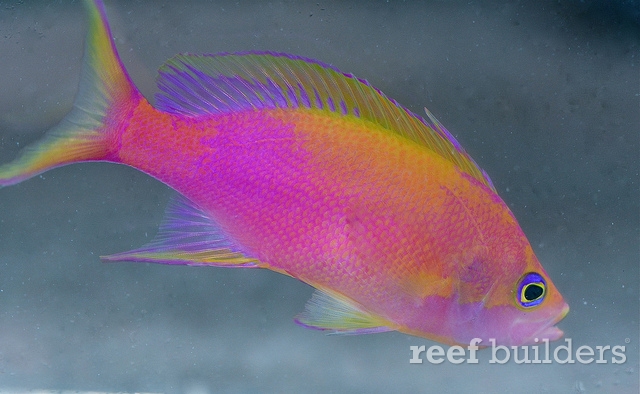