Adult brine shrimp are not considered a good source of food for any fish, but they are sometimes used to entice a slow eater to start eating. Newborn brine shrimp, however, are an excellent source of food for many small fish, such as mandarins and pipefish. Those fish need a constant supply of live food as they were built to eat small, live morsels of food continuously throughout the day, and in an aquarium we should try to satisfy that need.

We aquarists tend to call any tiny marine creature a “pod,” but there really are miniscule crustaceans called amphipods and copepods and it’s these creatures and other tiny invertebrates that these fish normally live on.

The benefits of baby brine shrimp

In a day or so, all that nutrition is absorbed into the shrimp to be used for energy. After that, they aren’t much better than adult brine shrimp, so we want to give them to our fish as soon as they are born. We want that energy to go into our fish.

Brine shrimp eggs are readily available in aquarium stores or online, and they are relatively inexpensive. Other seasoned salties out there will recall that they were once sold as “sea monkey eggs.”

The eggs can last for many years as long as they are kept dry and not too hot, and when they are added to seawater, they start to hatch in a little more than a day. We don’t want to just dump the eggs in our aquariums, however. We need to eliminate the shells first. 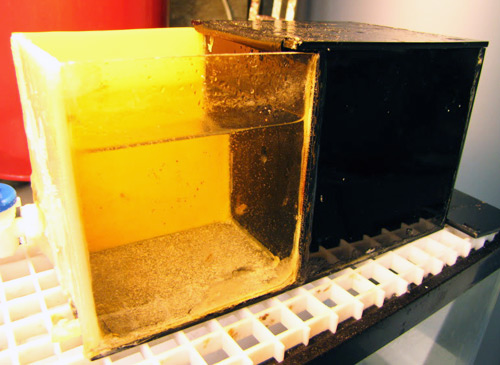 I designed the feeder shown here, but you can buy various versions from numerous sources. My design consists of a plastic container that is composed of two compartments. One side is black, and the other side is clear, but both sides could be black. (A clear container with the outside spray painted black could be used.) Separating the two sides is a barrier with an approximately 3/8” hole in it. You need some means to temporarily close that hole, so I added a sliding door for that purpose.

Hatching the eggs and separating the shells

Here are the steps for hatching the brine shrimp, separating the babies from the eggs, and feeding the nutritious shrimp to your fish:

I have been hatching brine shrimp all my life (and I am old). Without this excellent source of food, I would not be able to keep fish such mandarins and bluestripe pipefish, let alone have them spawn continuously in my tank.

An old tank such as mine has an ample supply of pods, but with this extra food source, I am assured that these types of fish get enough to live a long and, I assume, happy life.

Is this the best aquarium fish trap?