Commerson Frogfish- Hide and seek champion of the reef

Not your ordinary fish

The Commerson Frogfish (Antennarius commerson) or Giant Frogfish is a large species that can reach up to one foot in length. This frogfish species has a wide range, it can be found in the tropical Pacific and Indian Oceans and the Red Sea.

Commerson Frogfish are known to inhabit fairly shallow water reefs all the way down to depths of 100 feet, staying hidden amongst corals and sponges. These fish are masters of disguise even considering their size, with an assortment of evolutionary adaptations designed to make them one of the most efficient reef hunters.

It is a combination of effective camouflage and patience, that makes concealment for this perfect ambush predator fairly easy. The scale-less lumpy skin of the frogfish can be a variety of many bright colors and is frequently covered in scab-like patches and porous holes that mimic sponge.

The pectoral fin has adapted to grasp like a hand, this helps these fish brace against rocks or even walk on the reef rather than swim. The frogfish’s gill openings are also modified and they’re actually set back behind the pectoral fins for less movement, which could scare off potential prey. 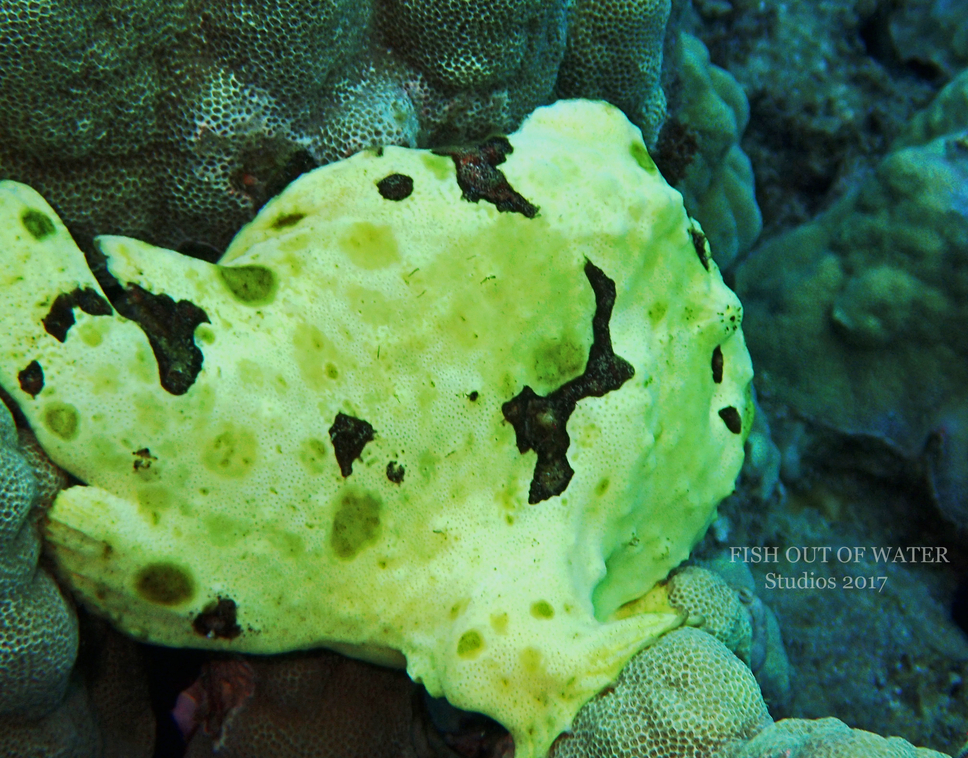 Frogfish are not known to be great swimmers, but they have developed a way to use their modified gill openings and a large gulp of water as a jet to propel themselves good distances with currents. They use their pectoral fins as wings and they can glide to a different area of the reef.

Frogfish are known for luring their prey with an altered dorsal spine that acts as a fishing pole with a very convincing lure at the end of the tip. Each twitch of this spine lures unsuspecting fish closer to the frogfish’s mouth. Biologists call this “aggressive mimicry” and it is demonstrated in the refined sophistication of these frogfish masquerading around the reef as corals, rocks, and sponges with less than good intentions. 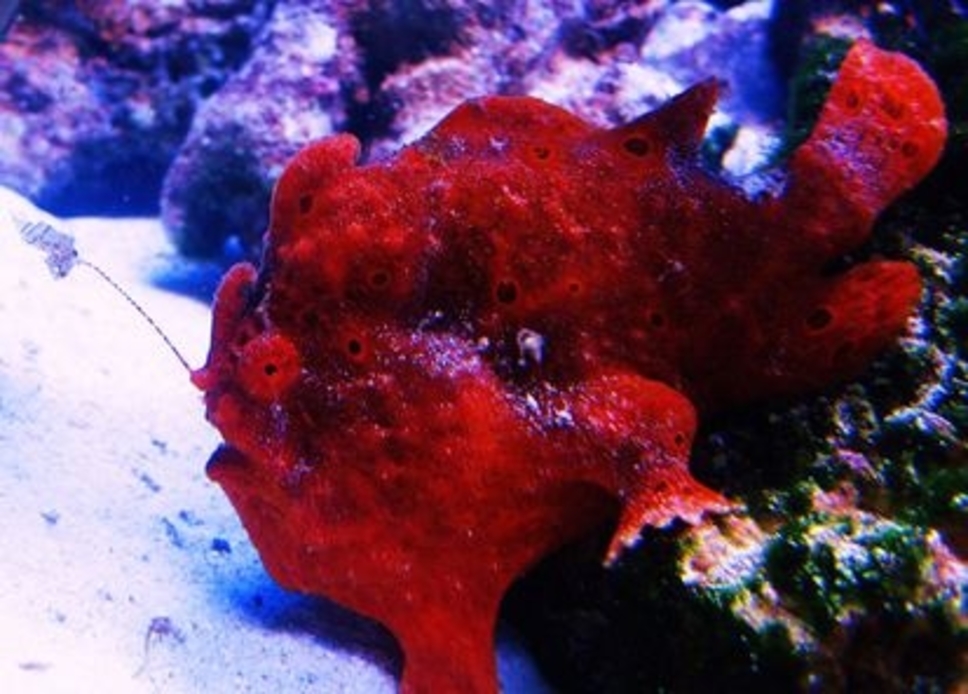 Any fish unlucky enough to be lured in by the frogfish is not likely to escape this deadly encounter. The Commerson Frogfish’s mouth can expand to 12 times its original size in only about 6 milliseconds, it can eat an animal roughly close to its own size in the blink of an eye. This swift attack is another weapon in the frogfish’s arsenal of not being seen, other fish never notice a nearby capture due to the quick movement and camouflage of the frogfish. 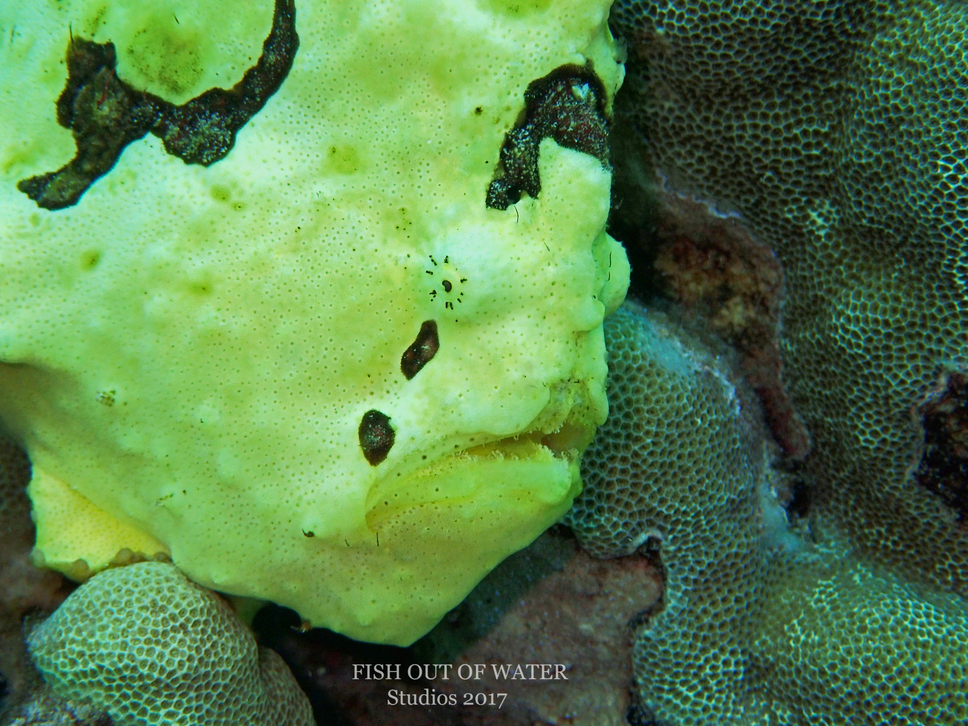 Detail of a Frogfish doing a coral impersonation

This frogfish is not poisonous or venomous, so it relies solely on its ability to imitate the surrounding environment and remain undetected to survive. The Commerson Frogfish has also been observed changing the color of its skin over a period of days to weeks to blend in with the surrounding area.

The scope and magnitude of all of these adaptations, that have evolved over long periods of time, primarily to make the frogfish an excellent predator. This also serves to cloak its defenseless self from predation. 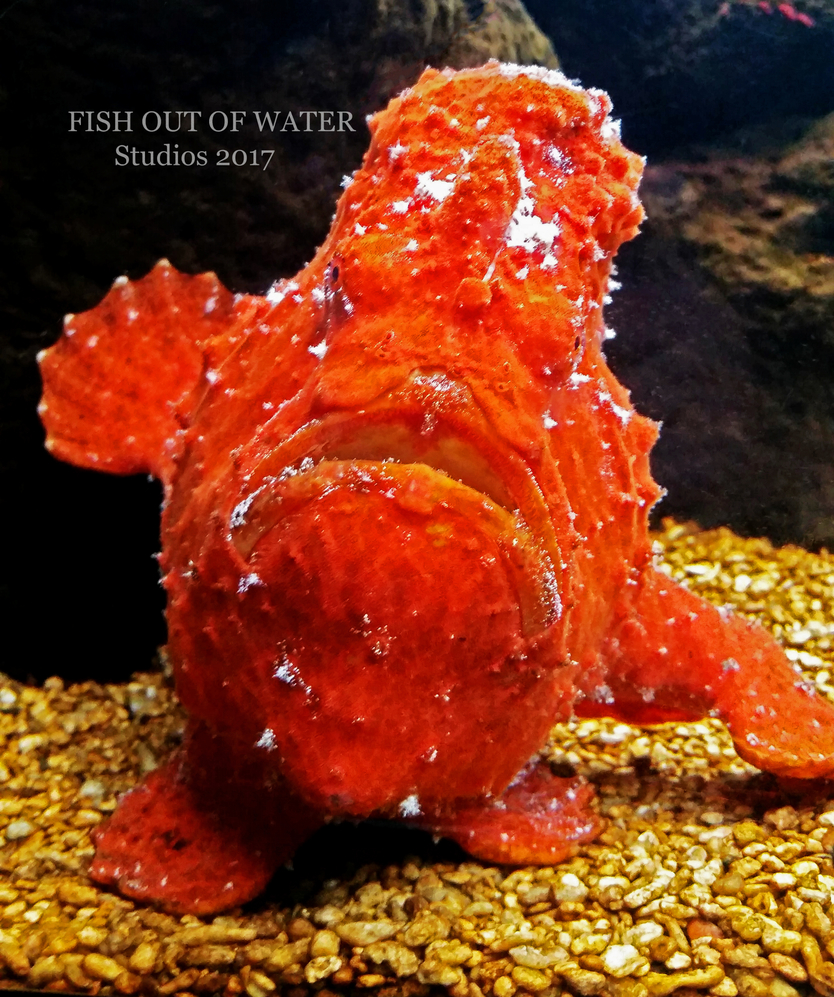 A contrasting color variety of Commerson’s Frogfish at Waikiki Aquarium

While the Commerson’s Frogfish would be a bit on the large side for most home aquariums, there are several smaller species like the Wart Skin Frogfish (Antennarius maculatus) that do well in a small, species-only reef tank. They are generally safe with most corals and are fascinating subjects to study with all of their copycat behaviors.

We caught some video of the Commerson Frogfish in this article offshore in Hawaii.