Illumina LED light from Vertex is charting it’s own path, outside the US for now

The Illumina LED light from Vertex is a new high performance reef light which is really taking a dynamic course to growing aquarium corals. Hearkening back to the days of the PFO Solaris and it’s infinite suite of modes and features, The Vertex Illumina is aiming to be a do-it-all LED reef aquarium light with lots of future proofing built in. For starters, the Vertex Illumina is one of the few lights that will come to market standard with both blue and royal blue LEDs and since color is the name of the game for most reefers, the inclusion of both blue wavelengths will make a lot of reefers happy. But there is much more to the Vertex Illumina than color rendition; modular design, active and passive cooling, control ability and host of other features will make the Vertex Illumina one of the powerhouse LED reef lights for the foreseeable future. Follow the break as we tease apart the features that will make the Vertex Illumina an archetype of LED reef lights for a while to come.

At this point, you are probably scratching your head about the name of the Vertex Illumina. Vertex’s LED reef light was originally called the Vertex Lumina but following some notifications regarding other LED lights already sporting the Lumina moniker (including the Blau Lumina and the Sander Lumina), Vertex has graciously gone ahead and renamed the Lumina to the Illumina so that instead of being distracted by trademarks, they can avoid market confusion and focus on bringing the Illumina LED light to reef aquarium hobbyists around the world*. As you’ll see in the feature set below, the Vertex Illumina brings the kitchen sink to LED reef aquarium market even though Orbitech probably already has a patent on the LED kitchen sink.

Modularity: The LED motherboard you see below is the module for the Illumina, the basic building block of the LED fixture. Each Illumina LED module is carrying 16 Phillips LEDs which use 38 watts of power although the system power of the module is closer to 40 watts total. The LEDs are running at close to 2.5 watts each and there are eight whites binned near 8000K, four royal blues and four royal blues. We were kind of floored to ehar that Verex had decided to go with both shades of blue as this has been a hoop dream of ours in a long time and the Illumina is only the second light to do this. Moving on, each of these major modules sport their own wireless circuitry which communicates to the controller of the fixture wirelessly. You read that right, a module which is wired and bolted into a fixture is communicating wirelessly to the onboard computer. At first this way of designing the light seemed like madness but in fact, the module is not wired into the light, per se. The module itself has piercing contacts which automatically connects to a supply of power running down the spine of the Illumina. When these piercing contacts connect to the supply line, some voodoo type of silicone covering grips around the piercing contacts to protect and isolate the connection. Kind of neat huh? For this light Vertex really went all out in terms of offering ease of upgradeability and modularity and that brings me to the accessory modules of the Vertex Illumina. You see the connector on the top left corner of the primary module is to accomodate the secondary LED modules which can be of any sort really. For now Vertex is developing these junio accessory modules in red and RGB but as long as the fixture can handle the heat, we don’t see why we couldn’t expect some multichip modules to join the party in the future. 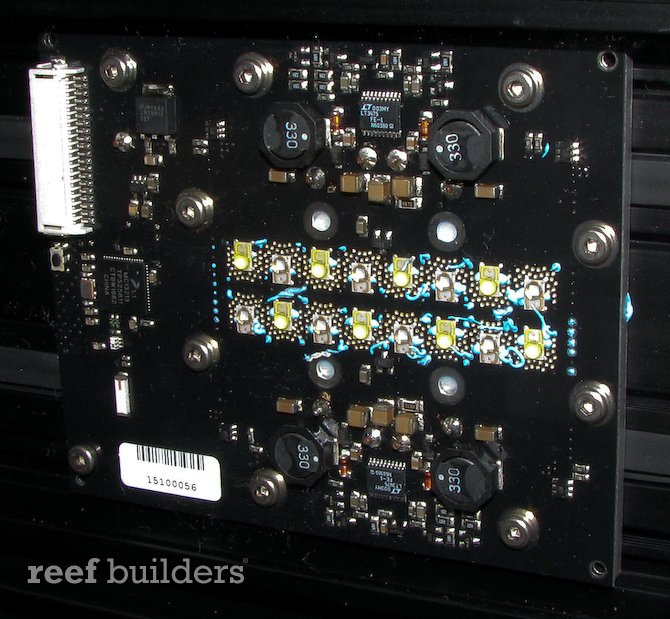 Controllability: As previously discussed, each Illumina has a built in controller which communicates wirelessly with each of the LED modules. The controller comes preprogrammed with user selectable sunrise, sunset, midday and weather simulations, as well as the ability to do some custom functions. We asked them about having the modules coming on and going off sequentially and the only reason they haven’t done it yet is because it just hasn’t been implemented. Getting back to the custom fucntions, the controller can manipulate all of the LEDs by color group, modules, auxiliary modules and programmed custom groups. There will also be some form of USB drive with onboard wireless in the same flavor of the Illumina so that your PC (and hopefully macs) will be able to do a lot of the initial programming in a familiar computer environment. 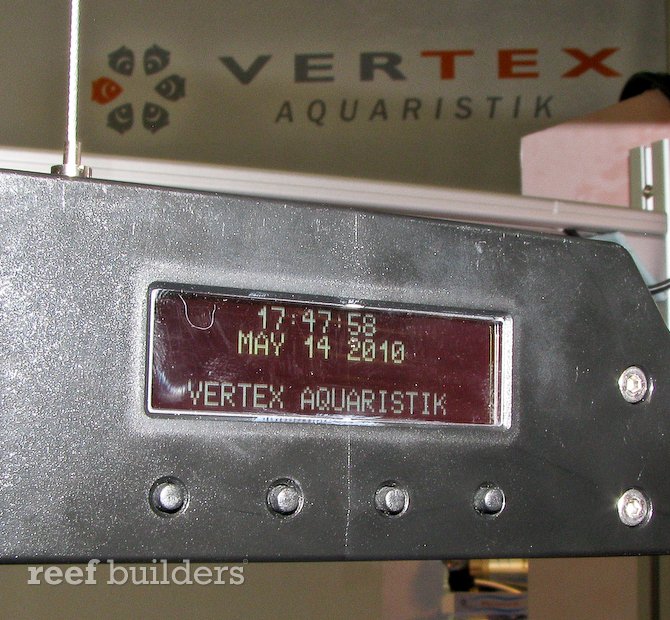 Cooling: The Vertex Illumina is built with substantially more cooling than is readily visible when you can first see at a glance. The LED modules are positioned right below a densely surfaced, built in cooling channel and it is flanked on both sides by large wings of aluminum which have large fins on the undersurface and tons of very fine fins on the top side. As if that weren’t enough, the cooling channel is actively circulated by built-in fans which are “not necessary” according to Vertex but allow for the end user to extend the life of their LEDs, especially if the operating environment of the fixture is particularly hot itself. We believe the substantial investment in cooling technology point to a future of this light which will be much more versatile and dynamic than the first suite of LED modules demonstrate. The Illumina lights we saw at InterZoo were mostly packing a handful of the primary 40 watt LED modules with some scattered red modules for show and lots and lots of space for daughter modules in between. 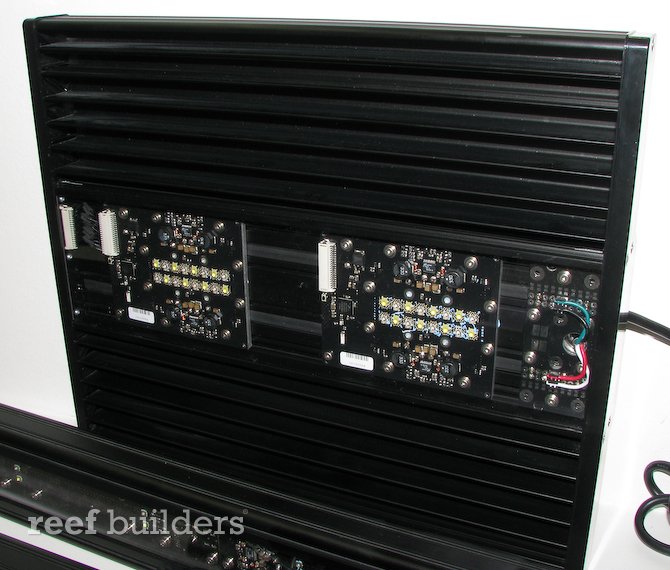 Power: The Vertex Illumina will come standard with about two 38 watt modules of LED light for every 18 inches of fixture. 76 watts of well balanced LED light every foot and a half is nothing to scoff at and the six foot illumina we saw at InterZoo looked like it was delivering the equivalent of three to four 150w metal halide pendants. The lack of secondary optics to focus the light of the Vertex Illumina might seem like a draw back and although it’s true that there will be some light spillage around the tank, the high quality primary optics of the Phillips LEDs are still directing most of the light towards the tank with their 120 degree directivity. With a significant capacity of heat management built in to the Vertex Illumina, we suspect that in the near future the Illumina will be able to handle more modules of LED power and really start approximating the intensity and spread of a 250 watt metal halide.

We still have a lot of questions about the Illumina and how it is engineered but this is getting to be about all we have breath for. As you can see, Vertex is really designing and engineering out of the box here and although they’ve borrowed from lots of existing concepts and devices, there is a strong possibility that the Vertex Illumina will greater than the sum of it’s parts. We can tell you that the Vertex Illumina is just now starting to ship in Canada and we’ve seen the 36″ light preordering for C$2350 (~$2250) and the 48″ for C$2900 (~US$2777). At the moment the Vertex Illumina infringes on nearly all of the points of the orbitech patent so the Vertex Illumina fixture will not be shipping to the US market for now. This is a very exciting LED reef lighting platform and it may be the first manufacturer to bow out of the American reef aquarium LED lighting market for fear of legal repercussion. We have confidence that Vertex will make some modifications to the Illumina which will offer it a safer legal entry to sale in the US but we hope the cost in functionality is not crippling. We really want to thank Andreas Schneider for all the time he spent answering our questions at InterZoo and Jason Behzad for the time he’s talked to us since.

Reef Foundation A, B, C and Complete are ratio-based supplements from Red Sea