The Mame Nano Skimmer III is a very small, practical protein skimmer that is specially designed to skim the smallest nano tanks. The Mame Skimmer is also an expensive, nearly complete kit which offers up more in terms of the user experience than sheer protein skimming performance. At a strict exchange rate, the Mame Skimmer sells in Japan for almost 9000 JPY which is close to $100. For that price you get the skimmer body, the waste receptacle, an airstone, all tubings and connectors and the only thing you have to come up with is the air pump.

We know you could make the Mame Skimmer III for a few bucks in parts, or have a local glass blower make you one, but it still wouldn’t be the same. Handling all of the Mame Skimmer’s parts gave us the opportunity to weigh in the quality of each one and even the plastic bracket feels more acrylic than plastic. We love how the o-ring is a special nearly clear silicone instead of black, further adding to the aesthetic of the device. The body of the Mame Skimmer III may not be double-blown glass but the craftsmanship leaves nothing to be desired. For those of you who have handled the fine Japanese glass of ADA freshwater plant products like the Lily Pipe, ya’ll know what I am talking about. Even opening the “box” of the Mame Skimmer III was more like unwrapping one of Apple’s new iGadgets than just another unboxing at Reef Builders HQ. Continue reading for more unabashed fanboyism for Mame’s beautiful Mame Skimmer III.

Once you get past the swanky packaging, the Mame Skimmer III is really an interesting design. Instead of a big bulky skimmer cup design it has a simple outlet that feeds to the included collection cup. The body of the Mame Skimmer III is slim, and the top is even slimmer, so it can easily be placed in the narrowest of All-In-One nano tank compartments. The Air driven design further reduces the footprint and also does not add any heat to the tank. The skimming design is not the most aggressive which means that the Mame Skimmer III will pull off mostly the easy to skim proteins, while also oxygenating the reef tank water and gassing off the CO2, We;re currently operating the Mame Skimmer III on an EcoMini 28 gallon tank, probably the high end of the capacity for the Mame Skimmer III, but this is a mixed reef, not a full blown SPS tank.

An air pump is not included but naturally, we’re driving ours with a classic Luft air pump, the kind with great air pressure which is much less affected by back pressure from a clogging airstone than most small air pumps could handle. Although air driven skimmers have mostly fallen out of popularity, we’d argue that replacing the airstone once a month is no more maintenance than is required to keep a needle wheel and intake venturi clean and in good working order. We’ll be backing up this post with a review in the future, in the meantime, enjoy the luscious low tech skimmer eye candy below. Huge thanks to Ken-San of Mame Design Aqua for hooking up this fanboy with a review unit of the Mame Skimmer III to test out. The mame Skimmer is not currently available outside of Japan, but hopefully this and future posts will encourage an American business to work it out. 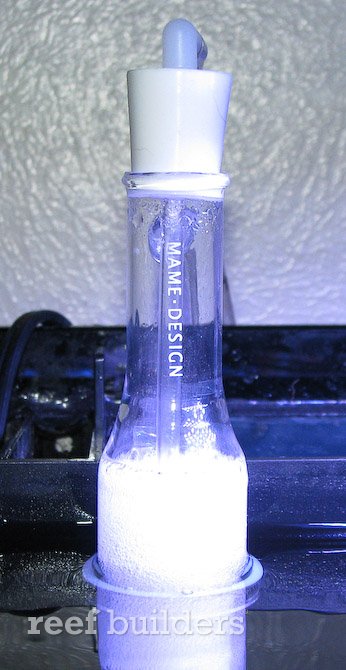