Yellow Holacanthus angelfish is not quite a queen, nor a rock beauty

A very unusual yellow Holacanthus angelfish has turned up at B-Box Aquarium which is not quite a queen angelfish although it does bear some traits of the Rock Beauty angelfish, Holacanthus tricolor. The Queen Angelfish (H. ciliaris) is a staple import from the Atlantic. Fully grown adults are typically blue-green with hints of yellow. Adorned with long trailing filaments and a blue crown on its nape, the common name is aptly quite fitting for this fish. The beauty and grace coupled with its relative ease in captivity makes it arguably the representative member for the Holacanthus 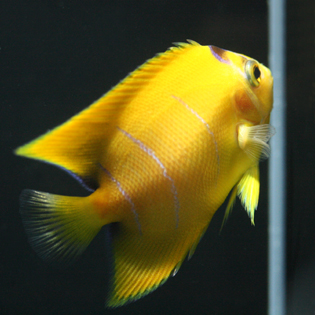 Hybrids and aberrations for H. ciliaris do naturally occur. The species readily hybridises with H. bermudensis in the wild, giving rise to the familiar Townsend’s angelfish. H. ciliaris also very rarely form hybrids with H. tricolor, with only a few specimens ever seen. As with hybridization, aberrations within this particular species is not abnormal. The most famous examples of aberrant Queen Angelfishes are perhaps those from St. Paul’s Rocks in Brazil. Specimens there run the gamut from being pure blue, resembling the Clipperton Angelfish, to all Yellow, all white, Koi, and practically anywhere in between. 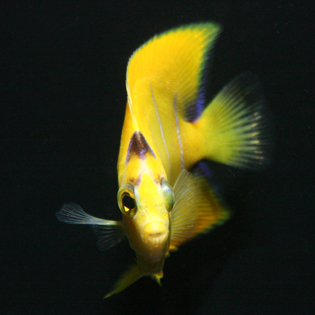 The yellow Holacanthus that you see interlacing this post was recently acquired by B-Box Aquarium in Japan. The highlighter yellow colouration of this individual is truly spectacular. Specimens that are typically bright yellow like this are usually xanthic morphs with abnormally yellow colouration. Such individuals tend to revert back to their natural colours after awhile in captivity. However, with the existance of amazingly mutated Queen Angelfishes living in St. Paul’s Rocks, the possibility that this sub-adult individual could be a waif from some far flung isolated reef in the Atlantic is not all that impossible.