Some analysis of the ‘albino’ ocellaris clownfish from Proaquatix 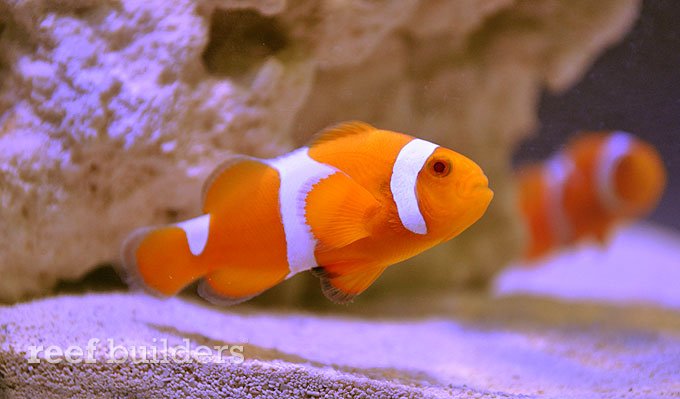 As ReefBuilder’s resident “Captive Breeding Guy”, I couldn’t help but weigh in on the new strain of Ocellaris that debuted from Proaquatix at MACNA over the weekend.  A few opinions of what these fish could represent have been floated, with Dr. Wittenrich calling them leusicstic and Jake Adams dubbing them hypomelanistic.

In what could be simply a difference of jargon, I’ll side with Jake and suggest that these fish represent a codominant form of a melanin reducing mutation, which some reptile keepers would call hypomelanistic but in other circles might be called albinistic.  For me, to be called leucistic I would’ve wanted to see normally-pigmented eyes, which is what is found in most leucistic animals supposedly as a result of how tissues form (and that eye tissue is perhaps derived independently of the other tissues such as skin).  The term “ghost” may also be applied, but in reptile circles “ghosts” are more often animals that are both albinos or hypomelanistic (lacking melanin/black pigmentation) AND anerytheristic (lacking displayed red pigments).

Personally, in an effort to find the most concise terminology, I will say these fish display a codominant form of what we most commonly call albinism (a uniform reduction of black pigment in across the board, including the eyes) – that is probably the best hypothesis I can make.  And I choose my words carefully (thank you Richard Ross for your great Skeptical Reefkeeping jargon lesson at MACNA) – until Proaquatix completes line breeding trials (mating various brothers and sisters together), we can only guess at the genetics based on the phenotype we are seeing.  Only in additional generations will the inheritance patterns help determine what we’re really dealing with.

What IS interesting to me is how we may be looking at two forms of Albinism in Amphiprion ocellaris. The first would be the one demonstrated by Marcel Triessl in South Africa, presumably a straight up mendalian recessive form of Albino, and now this second potentially codominant form of albinism.  Of course, this is not unheard of.  Again, we can learn from the snake breeding world that there are in fact several forms of “Albinos”.  In Red Tailed Boas, there are even two albino strains that look the same (the “Sharp” strain and “Kahl” strain), but in fact are caused by two unique genes (you get no albinos if you breed these strains together because the “albino” gene is flipping different genetic switches in each parental strain).  If it can happen in the snake world, it can most certainly be that there is more than one form of albino in the Ocellaris Clownfish.

So a “codominant albino”?  We’d probably have to call this it something like a “ProAQ strain Albino”. How would those genetics work? Well it’s actually pretty simple mendalian genetics, it’s just that we’re dealing with condominance instead of a recessive trait.  That would mean that a homozygous fish (let’s call it AA) would be our normally colored ocellaris. A heterozygous fish, AB, would show one “level” of the expression of the trait. Looking at these fish, it’s like they’re a perfect 50/50 between normal and full albino ocellaris…a 50% reduction of melanin.  It just seems to make perfect sense.  If you went full on homozygous for the trait, BB, you’d get full albinos.  So in fact, if Proaquatix mates these presumed AB x AB fish together, they should get a nice spread of 25% AA, 50% AB, and 25% BB fish in the next generation, those BB fish being fully expressed “codominant” albinos, what would be called a “super” in the snake world.  While I’m not personally a fan of hypomelanism as a name simply because it is broad and generic, we could ultimate call these fish normal (AA), hypomelanistic (AB) and super hypomelanistic (BB).  Again, this is all currently hypothesis, but it’s an interesting genetic mystery that has a clear direction to help find answers.  It’s back to the drawing board if we’re wrong.

On the topic of the proposed name of “Tangerine” for this possible codominant albino mutation, I’ve already talked with one Proaquatix staffer and suggested this name not be used.  The reason is twofold.  First, there is a hybrid clownfish being sold in another country that, if I recall correctly, carries the name Tangerine.   Second, and probably predating the use of “Tangerine” applied to a certain hybrid, there is actually already a “Tangerine” form of Ocellaris that was marketed and sold (and may still be sold) by Morgan Lidster at Inland Aquatics in Terre Haute, Indiana.  The Inland Aquatics Tangerine is, according to information on their own website, either similar to or the same as a dark variant of A. ocellaris from Sipadan Island, Borneo, photographed by Dr. Gerald Allen (page 95, Anemone Fishes and their Host Sea Anemones). Using the “Tangerine” name in a new way now serves to cause confusion.  At minimum, I encourage Proaquatix to drop the name Tangerine ASAP to avoid any future confusions, and instead pick some other orange-inspired trade name, perhaps “Apricot” or “Orange Smoothie” Ocellaris.

Of course, you can bet that the moment the next chapter of this story is written, we’ll be sharing it with you here on Reef Builders!  And these fish have generated all sorts of exceptional discussion – this article will be followed by yet another viewpoint from a guest contributor and scientist Adeljean Ho (I hope one day to get him some genetic material from the Lightnings and offspring to do some testing). Adeljean will be giving us all a run for our money as he applies his experiences and perhaps greater understanding of the terminology to these new fish.  Expect Adeljean to correct a few mistakes I laid out in the text above – I left them in place intentionally.

Mike Maddox is a case study in conflict of interest