Adeljean Ho was introduced to me by Dr. Matt Wittenrich at MACNA in Orlando. When discussing this fish with Dr. Wittenrich, he suggested that Adeljean had another opinion. After sharing a draft of my opinion post with him, the response from Adeljean was impressive. Adeljean, a PhD student in fish biology & ornamental aquaculture at Florida Tech, brings a solid knowledgebase to add a viewpoint to the conundrum that is the Proaquatix Tangerine Ocellaris Clownfish.  We’ve heard from Jake Adams, we’ve heard from me (Matt Pedersen), and now Adeljean weighs in with a third perspective to provide some technical corrections and further insights into the unique Proaquatix Tangerine ocellaris. There is certainly no shortage of guesses and opinions on these thought provoking introductions. – Matt P. 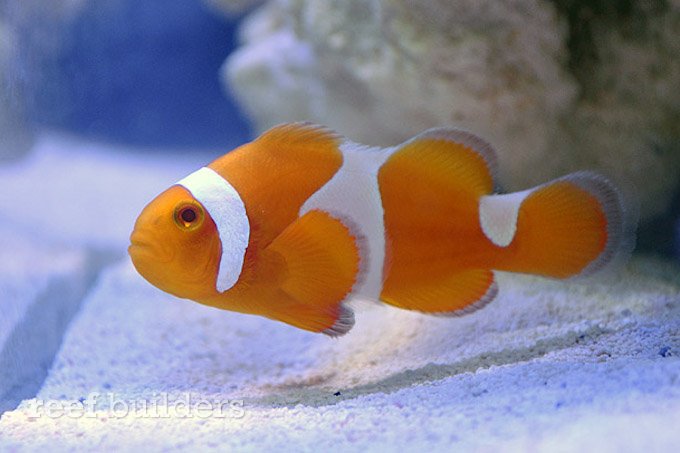 As a marine researcher and proponent of ornamental aquaculture, I get particularly excited when new cultured products hit the market. Unable to attend MACNA this year, I was graciously allowed to take an up close and personal look at the newly launched “Proaquatix Tangerine” ocellaris their facility in Vero Beach, FL. After examining their specimens, there is very little doubt in my mind what these fish actually are.

The “Tangerine” ocellaris have been labeled a few things since they debuted; these include hypomelanistic, leucistic, and codom (co-dominant) albinistic. However, there is clear difference between leucism and albinism. The difference being that albinism is a condition that only alters the presence of melanins (black pigments), meaning albinistic animals either lack melanins completely or have a reduced amount of melanin compared to the “normal” type. On the other hand, leucism is the condition that afflicts the color cells (chromatophores) themselves and thus all colors can be affected, not just the melanins.

So what are the “Tangerine” ocellaris? Are they leucistic or albinistic? 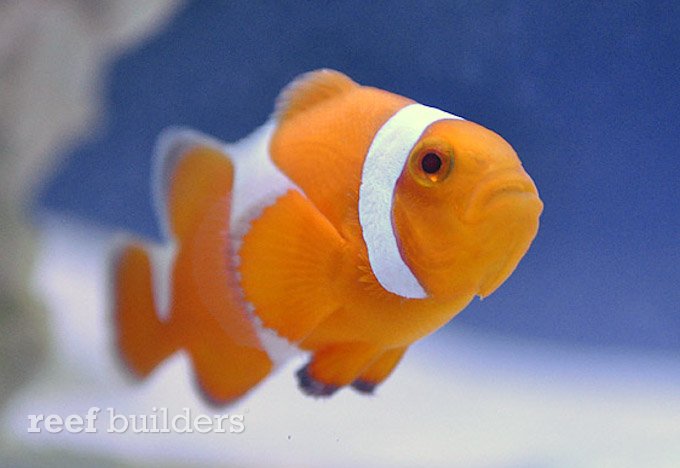 A common occurrence in leucistic animals is that they have “normal” appearing eyes. This is because eyes develop from a different source of tissue than skin chromatophores (color cells). Another characteristic of leucistic animals is either white or a muted coloration. However the orange coloration in anemonefishes is diet dependent (carotenoids), and high carotenoid farm feeds might mask leucism by inducing an orange color. However, the orange in the “Tangerine” ocellaris is mute compared to standard ocellaris that Proaquatix produces. This lends me to entertain the idea that they might be leucistic. However, if they were albinos, the lack of melanin would result in a lack of counter shading and make them look paler. With the substantial reduction in black, orange that is comparable to the normal ocellaris, and red eyes, I agree with Matt that these fish are indeed albinistic. However, I disagree on the mode of albinism.

Matt calls them codom (co-dominant) albinos. However, I recommend his term be corrected to incomplete dominance, as the two terms are not synonymous. Let us use a hypothetical example with hair. Incomplete dominance is a scenario where neither allele is dominant over each other, but they are both expressed in a transitional form. In our hair example, curly = C and straight = S. So SS = straight hair, CC = curly, but CS = wavy hair, an intermediate form. In the albinos, this would play out as 0% black, 50% black, and 100% black. In co-dominance however, alleles are equally dominant at the same time. So HC = Curly and HS = straight. In this case HSHS = straight hair, HCHC = curly hair, and HSHC = is a mix. Meaning if you are HSHC you would have 50% curly hairs and 50% straight hairs, very different from wavy hair.

The “Tangerine” ocellaris have a slight hint of black on their fins and Matt suggests that this is from an incomplete dominance scenario (50% black). However, I disagree. Most of our understanding of albinism comes from humans. Many specific mutations can render multiple genes defective and lead to albinism. Because melanins are synthesized, inactivation of any part of the synthesis pathway may result in reduction of melanin production. However, where in the synthesis pathway (which gene/mutation) the abnormality occurs, affects how much melanin is produced (how much black). For example, if a mutation completely inactivates the enzyme tyrosinase, then melanin can no longer be produced and leads to complete albinism (no black at all). However, some mutations affect other aspects of synthesis and lead to residual function of tyrosinase.

This leads to varying levels of melanins being produced and thus varying levels of black. Although incomplete dominance for melanin production does exist, a single functioning allele can lead to a lot of melanin production. Thus if these fish were to be incompletely dominant we would see much more black in the adults and the faint black they exhibit is not enough to constitute 50% black. It is likely the mutation crippled, but not destroyed the melanin synthesis pathway, and thus there are residual hints of black in the fish. If the pathway was completely destroyed, we would have fish with no black at all. I suggest that these fish exhibit complete dominance, meaning the albino mutation is recessive and only a homozygote recessive fish would be a “Proaquatix Tangerine” ocellaris.

There is a general belief that an animal has to be completely white or lack all black to be an albino, however this not the case. What people often call an albino (lacking all black) could be more appropriately called a complete albino or amelanistic. As there are traces and varying levels of black being in the “Tangerine” ocellaris, they are not complete albinos but albinos nonetheless. As all albinos are hypomelanistic by definition, terming them hypomelanistic is appropriate. However, to call them “almost albino” or “semi-albino” would be incorrect. Take a lamp for instance. Either it is on or off, you cannot have “almost on” or “semi-on”. Nevertheless, I am excited to see the results of Proaquatix’s proposed rearing trials to help elucidate and hopefully confirm my assessment of the nature of this variant. 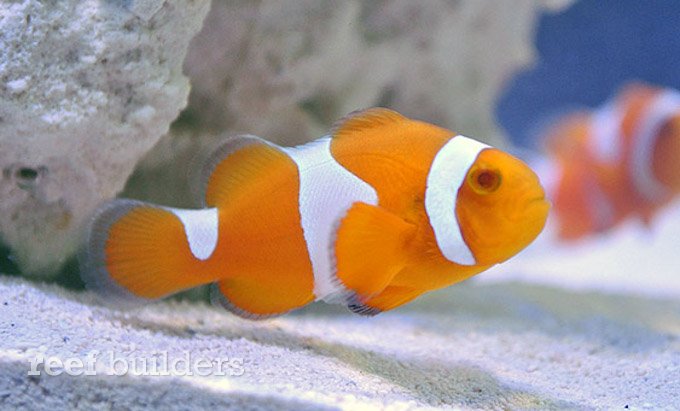 Aquatop USA has a new offering of Plasma lighting (updated)