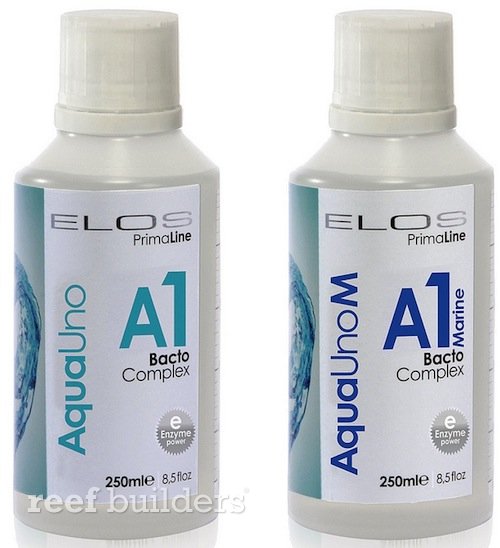 AquaUno A1 BactoComplex from Elos is a new additive of bacteria and enzymes designed to jumpstart the biology of freshwater and marine aquariums. When added regularly, AquaUno BactoComplex helps to break down organic matter, helping to reduce and prevent the buildup of detritus and other wastes in the aquarium. Some aquarium bacterial additives use cultures of specific strains, others rely on providing a food/carbon source for bacteria but AquaUno BactoComplex includes both of these plus a complex of enzymes to help bacteria to do their jobs better and faster. Elos will be making the AquaUno BactoComplex in two formulations, A1 for freshwater and A1 Marine for saltwater which should be added at a rate of 1ml per two gallons and a forthcoming AquaUno S capsule form should simplify some of the dosing in the future.

It’s fundamental that each aquarium has a stable biological ecosystem and to avoid major maintenances to reduce waste substances that in a short period of time will compromise the aquarium’s stability. ELOS developed AquaUno (M) because no matter what system you have, the stability and health of an aquarium comes from a good culture of bacteria within the filter, substrate and live rocks.

ELOS AquaUno (M) was developed not only to increase and establish a good culture of bacteria inside of the Aquarium, but also, preventing the excess of organic matter in mature aquariums deriving from fishes’ waste and over feeding when used regularly.

It also, reduces the Nitrogen cycle on new aquariums preventing the biological oxidation of ammonia to nitrite and then to nitrate, enabling the introduction of new livestock faster than usual, without compromising their health and habitability of their new “home”.