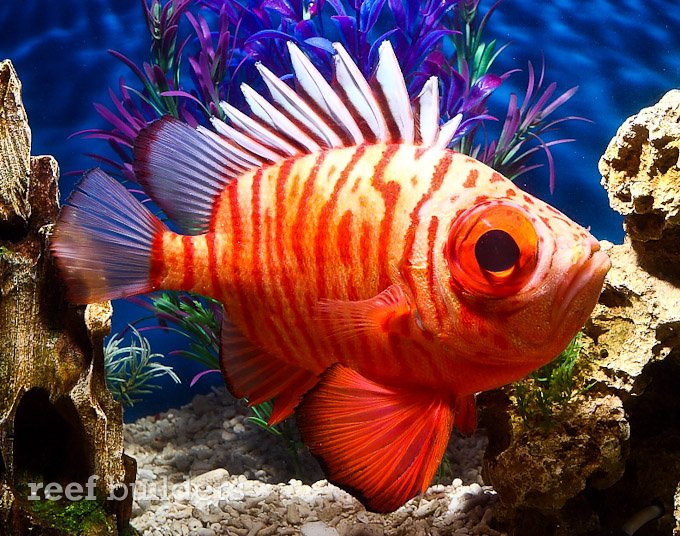 Up until a week ago, Pristigenys meyeri was an unknown fish in the aquarium trade, that is because the only living pictures of this species of deepwater popeye catalufa were taken by submersible at 740 meters, that’s 2400 feet deep! Recently, Abyss Aquatics in Stockport, Manchester UK got word of a particularly special bigeye fish floating around their supply channels and the Pristigenys meyeri they landed is likely the only living specimen ever put on display. Seriously, Cookeola japonica and Pristigenys niphonia are cool and all, but this red-zebra-striped Pristigenys meyeri is the stuff of legend, the kind of super rare, super bizzarre fish you’d only ever expect to see at a public aquarium.

Pristigenys meyeri is known from the Indo West Pacific Ocean, usually at great depth, although it was first described in 1872. Like other species of Pristigenys, P. meyeri grows to about ten inches long (25cm) and since it comes from such abyssal depths, should be provided with cool if not cold water. Abyss Aquatics is holding their one-of-a-kind meyer’s bigeye in an aquarium by itself with a swanky £975 price tag, which in dollars is $1500, or less than a dollar for every foot of depth where Prisitgenys meyeri was first photographed alive. Given the origin of this super deep water Pristigenys meyeri, Abyss Aquatics ought to consider keeping this fish from the abyss of the ocean as their mascot.

Sunlight Supply's Maristar 2 is coming at ya with a trifecta of metal halide, T5 and LED lighting