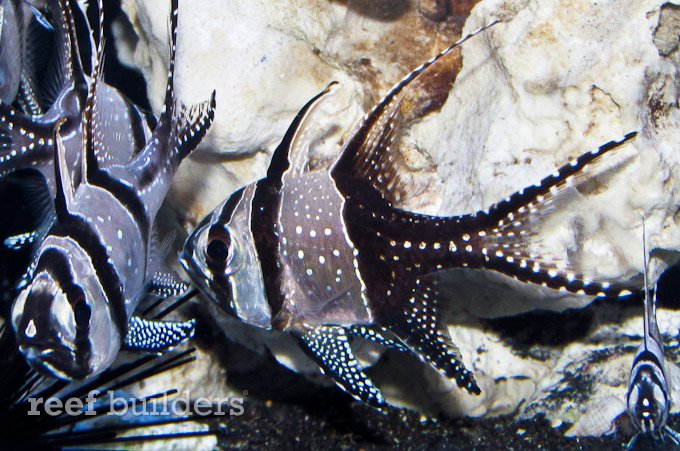 The Panda Banggai cardinalfish is the first domestically produced captive strain of the iconic reef aquarium fish, Pterapogon kauderni. We got our first look at the half-black Panda Banggai at the Tropical Marine Centre booth at InterZoo 2012 where TMC representatives and associates were extremely helpful in aiding us to get and capture nice clear shots and this stunning up close video.

It is fascinating to think that the first ever domestic strain of the iconic freshwater angelfish, Pterophyllum scalare, was a half black variety and so it is with the banggai cardinalfish as well. Although the first half-black angelfish was a tiny step in the evolution of the domesticated freshwater angelfish, it led to many awesome varieties of the species including all black, zebra, veil and pearlscale varieties that have been criss-crossed to produce a myriad of forms.

The Panda Banggai cardinalfish strain may be only slightly removed from the color and pattern of the original cardinalfish from Borneo, but it could lead to many more exciting strains and colors. For a fish that has enjoyed only moderate success at self-sustaining populations in the marine aquarium hobby, a strong push by marine breeders to refine and develop the panda banggai cardinalfish in the hobby could cement the species as the next frontier of “guppification” of a marine species, for better and for worse.
[youtube width=”680″ height=”400″]http://www.youtube.com/watch?v=YgUv_GlBx9k[/youtube]