This feature of the blackspot pygmy angelfish is a great inaugural post from what will become a regular contribution from various team members of Cairns Marine. Being one of Australia’s largest marine life collectors comes with its perks and when Cairns Marine collected Centropyge nigriocella in Australia for the first time, they knew that this kind of story should be shared with the world.

With the world heritage-listed Great Barrier Reef concluding on the edge of the continental shelf, you enter the pristine waters of the Coral Sea. One hundred and fifty miles directly out from Cairns and rising from the depths over a mile below is the expansive Holmes Reef complex, home to the famous endemic Purple-lined Fairy Wrasse (Cirrhilabrus lineatus). In a region where there are only two operators licensed to collect under strict regulation nobody can hear you scream. After strategically placing barriers in position and carefully ushering the delicate little fish into your net, you know you have collected something special.

This Reef Builders exclusive is the story from two brothers, Tyson and Cale Bennett working aboard the Cairns Marine vessel Clearwater that managed to stumble across one of the most cryptic dwarf angel species on the blue planet, the Blackspot Angel (Centropyge nigrocella). Considered to be a rarity in its originally described, native range around Johnston Atoll and the outlying islands of Samoa and PNG, this live discovery is the most recent in a stellar year for rare and unique pygmy angelfish collections around the world (eg. Centropyge narcosis, Paracentropyge boylei, Centropyge debelius and various hybrids) – and another notch in the dive belt of Cairns Marine’s professional diving unit in the Coral Sea.

With the exception of a fluke discovery in early 2011 the Blackspot Angelfish has only ever been found as a casualty of scientific surveys using chemical collection methods and these living specimens are the true definition of rare in the aquarium hobby today. Unlike many of these other finds, Centropyge nigriocella doesn’t hail from the bone crushing depths usually associated with being a rare Centropyge. 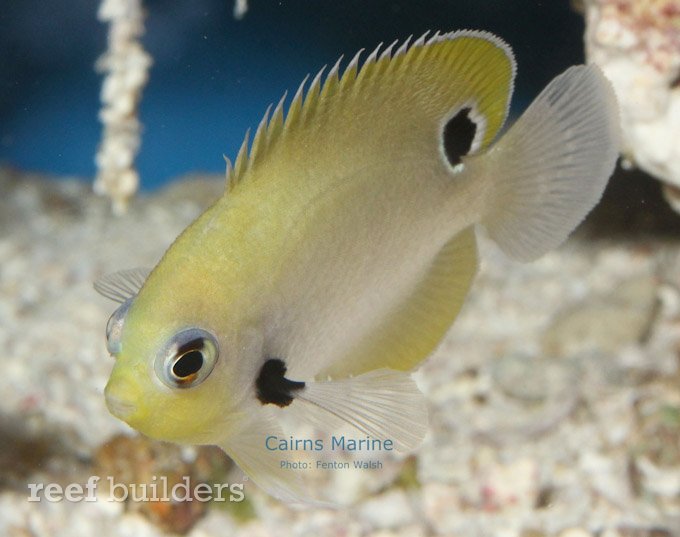 Growing only to a maximum size of 6cm (2.5 inches), the habitual range of blackspot pygmy angelfish bottoms out at a very reasonable 15m (45ft), ensuring that this little guy is free of the usual decompression issues generally of concern with fish pulled from extreme depths. The video below is evidence of this by its strong and confident swimming action in its holding tank at the Cairns Marine facility.

Currently unsure of the whereabouts of the 1st recorded live specimen (also documented on Reef Builders) this is only the 2nd fish of its species to be successfully collected alive and offered to the trade. Add to this, the circular stamp of MAC accreditation provided by the professional outfit at Cairns Marine, this rare pygmy angelfish is a prime example of sustainable fishing in practice.

As shown in the accompanying photos, this small pale yellow fish with the black eye spot (occelli) would hardly stand out in its natural environment, even with the excellent 30m+ (90ft) visibility typical of Coral Sea dive sites. The Aussie Hand-Caught delight was collected from the inter-reefal lagoon of Holmes Reef alongside up to 20 other individual Centropyge. It shared its rock ‘bommie’ with bedfellows including Coral Beauties (Centropyge bispinosa), Herald’s angels (Centropyge heraldi) and Pearlscale angels (Centropyge vroliki) and it was noted that the immediate area around the rock was surrounded by a bed of algal growth, quite unique from other collection sites in the Holmes Reef area. This might not be a total surprise though with reports of this incredibly elusive and cryptic fish having a preference for a predominately herbivorous appetite.  (Fishbase) 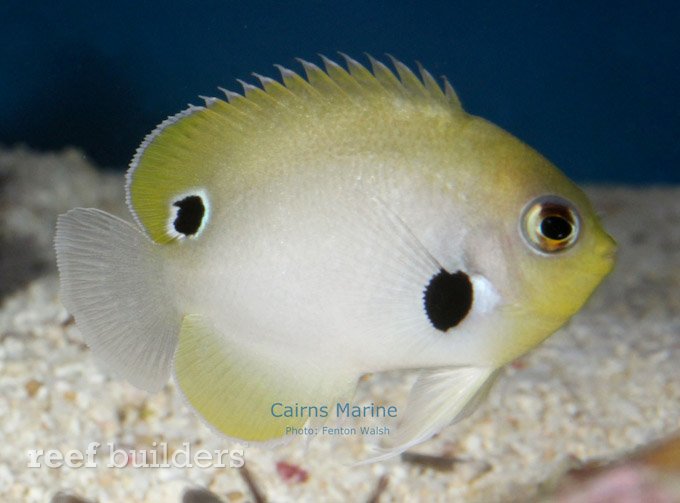 According to the divers involved, this seemingly small 2m x 1m isolated rock bommie, some 15m removed from the body of the reef itself, was a bustling mini-metropolis of aquatic real estate and was also home to a surprisingly diverse cast of other popular aquarium species. Cleaner shrimp (Lysmata sp.), assorted Saron shrimp (Saron sp.), Bumble Bee squat lobsters (Galathea pilosa) and Redblotch basslets (Plectranthias winniensis) were in attendance as well as another basslet species never before recorded in Australian waters. Several juvenile Stubbytail eels (Uropterygius sp.) were also sighted in and amongst the honeycomb style rock tunnel network of the boulder which always adds an element of difficulty to any collection.

If one rock, barely the size of your average office desk and seemingly insignificant in comparison to its surrounds, could harbor such interesting species diversity and at such densities, imagine the possibilities. In the eyes of Cairns Marine they have barely scratched the surface of new discoveries in the remote area and this further highlights the importance of the Coral Sea in the collection of aquarium specimens for display around the world.  Watch this space!