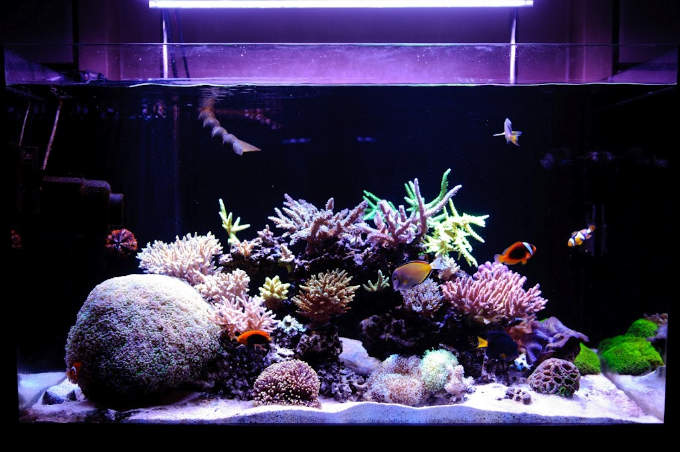 Lawrence Chan’s SPS reef is just a plain nice looking SPS dominated aquarium. Great coloration, enough room for the corals to grow and a big hammer dominating the scape make this aquarium a pleasure to look at. Located in Hong Kong Lawrence Chang has access to some nice big and likely affordable SPS colonies, which is obvious after just one glance at the system. The aquarium measures 40 by 20 by 30 inches (100 by 50 by 75 cm) which amounts to a volume of around a 105 gallons (400 liters). The system is illuminated by a combination of DIY LEDs and two T5 tubes. Biopellets are used to keep nutrients down and color up the corals.

The DIY LED fixture consist of 16 3 watt XPG white LEDs, 16 3 watt XPE blue LEDs, and 16 3 watt XPE royal blue LEDs. A 39 watt ATI Coral Plus and 39 watt ATI Purple Plus are used  to balance out the coloration of the LEDs.  Flow within the system is provided  by a Tunze 6100 pump on DIY wave maker along with a Koralia 4. Filtration is met by a Avast Cs1 Cone skimmer, along with filtersocks and Kent Reef Carbon. A 1/4 HP Hailea chiller along with a 200 watt heater keep the temperature in check. Calcium and other parameters are kept in balance by manual dosing of Kent Turbo Calcium, Arm and Hammer Baking Soda (kalkwasser) and Brightwell Magnesium powder. Another DIY LED consiting of 17 3watt LEDs illuminates the frag tank. Ten percent Water Changes are done monthly for additional nutrient export. Be sure to check out Lawrence Chan’s thread over at the Honk Kong Reef Forums.