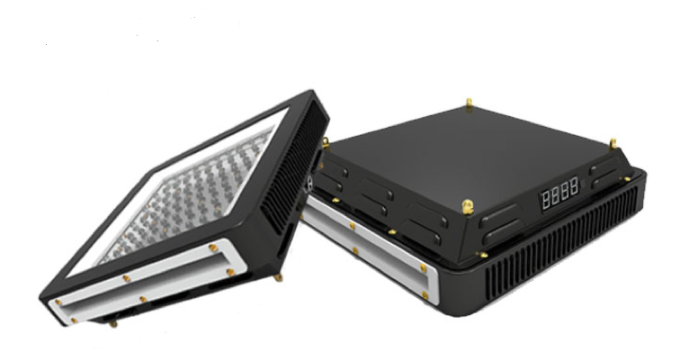 For this 144 watt Reef Breeders LED fixture, “interesting” is probably the best description we can come up with. The Reef Breeders LED fixtures aren’t necessarily ugly, but they are not the prettiest things in the world either. These fixtures would probably best suited for fish stores, wholesalers or others situation were looks isn’t the most important part.  Priced in the 300 dollar range the new Reef Breeder LED fixtures are also great for reefers not looking to break the bank. Beside the great pricing the new Reef Breeders fixture also offers some neat features that are worth mentioning, such as a modular design which allows easy access to the internals much  like the newly released Ledtric Inspire, along with full controllability through both a remote and an on fixture controller.

The Reef Breeders fixture offers dimmability through both an interface on the fixture itself and provided remote, and also offers dawn/dusk simulation. A built in timer allows the user to setup lighting cycles. The fixture has a modular design meaning that no glue is used, resulting in the ability to open up the fixture by simply removing some screws in case it is needed. Two fans on top of the LED array under the hood provide cooling, running cool air through the whole fixture increasing contact time with the heatsinks. The fixture will retail for  $299 or $349 depending on the configuration selected, and should ship out September 15th.