Omega Sea Premium Reef Salt and Premium Reef Salt are two new mixes from an unlikely player. Omega Sea is well known for producing a wide range of aquarium fish foods made from the freshest ingredients but now they are about to shake up the salt world with something new: a salt mix which yields 20% more seawater.

We’ve seen claims from salt mixes before which promise to produce more seawater from less salt mix so we walked into Omega Sea’s Aquarama booth armed with a heavy dose of skepticism which was shot down like a paper plane. When we pressed Omega Sea about how a certain amount of salt could mix up more than the other established players, Omega Sea told us it mostly has to do with the specific grade of Magnesium Chloride that they use in their Premium Reef and Salt Mix.

Apparently the most cost effective form of Magnesium in a pure form suitable for aquarium applications is a Magnesium Chloride hydrate, MgCl2(H2O)6 which has a molar mass of 257 grams. Meanwhile, Omega Sea has the lock on a source of pure Magnesium Chloride in an unhydrated form which has a molar mass of only 95 grams. So there you have it, Omega Sea salt mixes have less water in the bag and more usable minerals to produce aquarium seawater.

So Omega Sea’s 15.5 lbs of salt mix will cost about as much as other brands’ 50 gallon salt mixes but it will yield 20% more seawater, or 60 gallons, of a similar density and with all other constituents being right in line. As we’ve come to expect, the Reef version of the Omega Sea Premium Salt mix will mix up with higher Calcium, Magnesium and alkalinity values. But if Omega Sea’s claim holds true then we and everyone else will be glad to get 60 gallons of salt mix for the price of 50.

The Omega Sea Premium Reef and Marine Salt Mixes are also now shipping in much nicer packaging which should help you spot them at the LFS around the U.S. 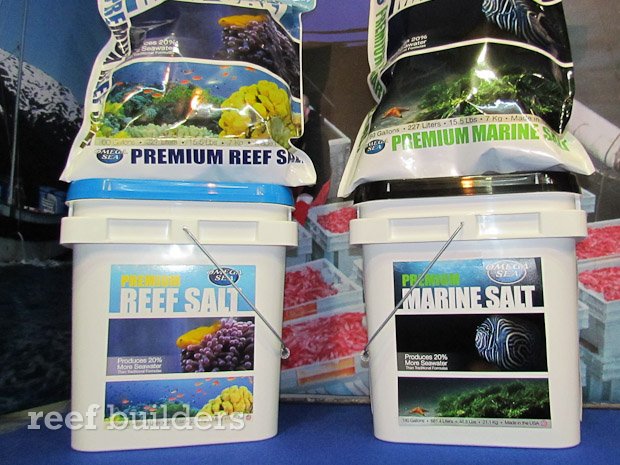 Tips for Adding New Fish to an Established Community

On location in Bali, Indonesia - birthplace of the first captive bred clarion angelfish