4 Reasons There’s No Better Eel Than the Snowflake Moray

That’s the point I tried to communicate to my wife, Melissa, when developing the livestock list for the 125-gallon FOWLR (fish-only-with-live-rock) tank that now resides in our living room.

I really wanted to include a snowflake moray (Echidna nebulosa), a denizen of the Indo-Pacific, in my lineup of fishes, and I was launching into a well-rehearsed sales pitch, knowing I had my work cut out for me trying to sell the idea of an eel to my somewhat ophidiophobic spouse.

Then I made a cosmic blunder: Just when I thought I had her convinced, I offhandedly remarked, “And don’t worry, I’ll keep the tank well covered so it’ll never escape.”

Thus ended my dream of adding E. nebulosa to my tank. No way was a snake-shaped fish with the ability to depart its aquarium ever going to cross the threshold of our home, Melissa informed me in no uncertain terms.

However, while it’s too late for me, there’s no reason my fellow salties should be denied the pleasure of keeping what is arguably the ideal aquarium moray. So let’s take a look at some of E. nebulosa’s prime selling points:

With white, yellow, and brown blotched markings on its body, vaguely reminiscent of snowflakes, and an almost cute face with gold-rimmed eyes, E. nebulosa is quite visually stunning—some (though not my wife) would even say “charming.”

Many of the moray eels can get downright massive! For example, the very common green moray of the western Atlantic (Gymnothorax funebris) can grow to about 8 feet in total length, and the aptly named Indo-Pacific giant moray (Gymnothorax javanicus) can reach almost 10 feet. Obviously, these morays grow too large for virtually any home aquarium.

E. nebulosa, on the other hand, reaches only a very manageable 3 feet, and most specimens remain considerably smaller. While 2 to 3 feet is definitely a respectable size for an aquarium fish, a standard 55-gallon aquarium will suffice as minimum housing for this species.

With a penchant for eating crustaceans more so than fish, E. nebulosa will generally cohabit with other fish species with few problems. Nonetheless, I wouldn’t rule out the possibility that bite-size fish may be taken, especially when the eel starts to gain some size. So, just to be on the safe side, I would recommend avoiding housing a snowflake moray with any fish small enough to be swallowed. Of course, cleaner shrimps and other ornamental crustaceans are right out as tankmates, as well.

Though the occasional specimen may require live foods, such as glass shrimp, to initiate a feeding response, most snowflake morays will readily adapt to non-living fare. Offer a variety of fresh or frozen (and occasionally vitamin-enriched) meaty items of marine origin, such as shrimp, squid, clams, mussels, and fish flesh, ideally presented with tongs or a feeding stick (never with your hands). Snowflake morays should be fed only two or three times per week. 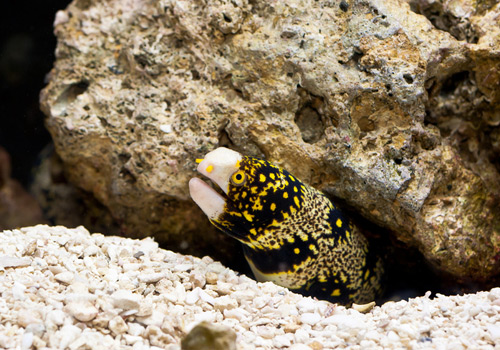 While I’ve painted a justifiably positive picture of E. nebulosa, this species does have a few potential drawbacks to consider. One is its ability to undermine and topple rockwork. You do want to provide a good amount of live rock for the eel to hide in, but be sure any stacked rock is carefully secured, e.g., with plastic tie-wraps (zip ties) or aquarium-safe epoxy, so the eel can’t topple it with its wriggling.

Then there’s the issue of the eel potentially escaping and winding up on the floor—which is what killed my chances of owning one. This is a very real concern, as E. nebulosa is an accomplished escape artist and will slither out of any opening large enough to allow its passage. So, cover the tank well!

Are you sold?
Hopefully I’ve done a better job of convincing you of E. nebulosa’s aquarium-worthiness than I did with my wife. Now, if you can think of anything I can say to change her mind, please let me know. It still feels like something’s missing from my tank!