Yellow Longnose Butterflyfish: One of the Best Aquarium Butterflies

The butterflyfishes tend to be a touchy lot when it comes to aquarium keeping. Many have highly specialized diets that are difficult—if not impossible—to satisfy in aquariums. Several are obligate corallivores, which means they eat nothing but coral polyps, making them very poor aquarium candidates indeed. Others may be less-finicky feeders but are still hit-or-miss in terms of hardiness for one reason or another.

Nonetheless, there are some species among the butterflyfishes that adapt reasonably well to aquarium conditions and feeding and, therefore, tend to thrive in captivity given the right environment and care.

Among the better butterflies is one of my personal favorites: the yellow longnose butterflyfish (Forcipiger flavissimus) from the Indo-Pacific. While I wouldn’t describe F. flavissimus as particularly beginner friendly, I think it’s a pretty solid choice for the experienced hobbyist with the right setup.

I should point out that F. flavissimus has an almost identical (albeit less frequently available) cousin with an even longer, more slender schnoz—the very cleverly named big longnose butterflyfish (Forcipiger longirostris). Of course, it’s pretty tough to compare the relative nose lengths of these two species unless you have a specimen of each side by side.

A better way to tell them apart is to look at the chest area. You’ll see a cluster of small black dots there if the species in question is F. longirostris but no dots if it’s F. flavissimus. Also, on the big longnose, the black coloration on the head tends to cover the entire eye, whereas the bottom portion of the eye is silver on F. flavissimus.

A well established system containing ample live rock (offering the longnose plenty of natural feeding opportunities) is highly recommended for this species, and I would say a tank in the vicinity of 100 gallons is about minimum housing for one. 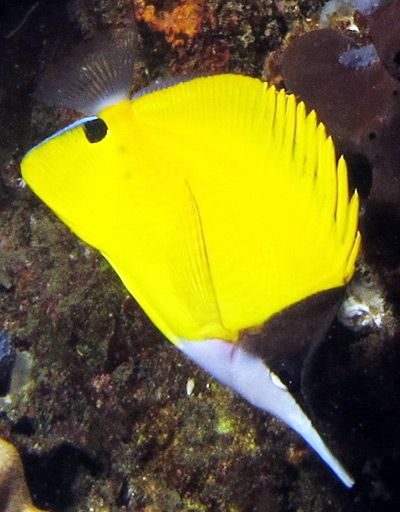 FishBase lists this species’ natural prey items as including hydroids, fish eggs, small crustaceans, the tube feet of echinoderms, the pedicilaria of sea urchins, and polychaete tentacles. But fear not, you don’t have to worry about presenting anything so exotic to aquarium specimens. This species will accept a wide variety of small non-living meaty items, such as frozen mysids, chopped clams, chopped shrimp, etc.

One important note on feeding: Make sure any specimen you have your eye on is eating at the local fish store. F. flavissimus usually learns to accept aquarium fare with little difficulty, but you don’t want to take chances. This species, like most butterflies, doesn’t have a lot of nutritional reserve and may not be able to recover if it goes a long time without eating.

F. flavissimus is not especially aggressive, though it will squabble with conspecifics and similar-looking species. Otherwise, it should coexist just fine with other peaceful species that are sufficiently dissimilar in appearance.

Though some sources list this species as reef safe, I wouldn’t risk keeping it with sessile invertebrates. My fear would be that the temptation to nip at coral polyps with that forceps-like snout would prove irresistible.