Chronicles of Meiacanthus kamoharai: From emaciate to immaculate

Nearly two months ago we obtained what could be the first Kamohara fangblenny exported out of Japan. Although late last month we reported that a couple of specimens were headed to the U.S of A during the MACNA season, probably to ORA, the fish still remains a great rarity in the hobby and only occur outside of Japan in severely limited pieces. Over the weeks we’ve had ups and downs with our Kamohara fangblenny, and we’re spilling the details for all would-be Meiacanthus fans.

To begin, the fish was a special delivery from Mr. Koji Wada, curator of BlueHarbor – the world renowned quasi legendary fish store in Japan. It has been made known to Koji that the kamohara blenny holds a special place in our hearts and you could imagine the look on our faces when we received this large spectacular shimmering fish in every bit of its three inch body (yes it was a big blenny).

After acclimation and the works, we settled the fish down in a bare glass tank with numerous PVC pipes. A must have when acclimating any Meiacanthus species, as these fish live in abandoned tubes, hollow crevices and abandoned glass bottles etc in their natural environment. 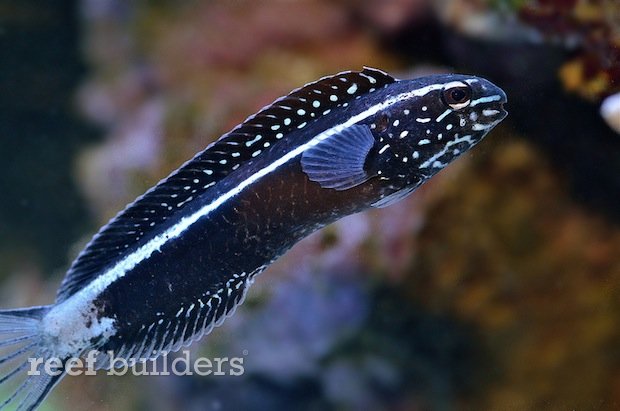 The next day we got about trying to feed this fish. Contrary to my belief, Meiacanthus can be a challenging group of fish to get feeding at the beginning. As this was made clear to me by our very own Matthew Pederson. It refused initially, all kinds of food, but we got lucky with Dr. G’s fish eggs. That was the only thing it would sample, and never in any substantial amount. For days we flooded the tank with fish eggs, only to witness the fish picking and sampling tiny morsels, one egg at a time, until it had enough and would retreat back into it’s plastic pipe for the day.

Weeks went by and the fish grew noticeably thinner. Although it wasn’t eating much, it was definitely enough to at least keep its weight. The fish was declining at a rate in which we were very uncomfortable with. The weight loss was definitely not normal and we attributed the phenomena to two causes.

See also  Pac-Pods is a new Superfood from Reef Nutrition

– Being a moderately subtropical fish in Japan, we speculated that our water temperature was too warm. Although a shallow water fish found many a times swimming near the surface, the waters around those parts are a tad cooler than what normal reef fish are accustomed to.

– The fish had internal parasites that prevented it from gaining weight. Many fishes harbour such parasites from the wild. In their natural environment, a stress free and an endless plethora of food for constant grazing helps maintain this parasite-host relationship such that the fish is not completely taken over by its uninvited guest. A newly imported stressed out fish in a confined aquarium eating only moderately well however, doesn’t provide enough nutrition for itself and its parasite, and usually results in an emaciated fish that slowly wastes away.

Immediately we lowered the temperature to 74F (24C) temporarily and observed for improvements. To counter the possible internal parasites, we changed its diet to include something that contained praziquantel. Since it was still consuming nothing but fish eggs, we switched to Dr. G’s medicated fish eggs which contained praziquantel. This new diet coupled with the decrease in temperature lasted for a few weeks, and we were treated with some positive response.

The fish was noticeably calmer and it had stopped growing thin. Now we were met with a new problem, and that was to return the fish back to its original weight and maintain it at that. The tank was flooded periodically with all sorts of food but all we received was a dumb stare as the food floated pass it, occasionally even hitting it in its face. When fish eggs were introduced, it would miraculously rise from its suspended state and start eating. In an almost half defeated state, we decided to try dry pelleted food. This time we tested with ReefNutrition’s APBreed TDO chroma boost**.

Almost magically, the fish began romping down every single pellet with gusto and vigor. Much more responsive was it to this pellet than it ever showed for fish eggs. We really didn’t know what was going on but was glad that the fish eventually, after many harrowing weeks, decided to turn the corner and start taking dry food. The lowered temperature and praziquantel treatment definitely did something, and the fish would not be alive today without that.

Fast forward to today, the fish is healthy and living in a reef environment and no longer in its glass prison with PVC pipes. The temperature has been raised back up by one degree, and it spends most of its day swimming about now and continues to eat pellets. In a strange twist of events, it now eats nothing else but TDO chroma boost pellets by ReefNutrition, and now completely ignores fish eggs! It has gained back its weight and is maintaining it well, but we wouldn’t mind if he decided to abandon his svelte figure for a chubbier one.

A huge thanks to Matthew Pederson for his initial advice, Ong JunKai who has been nothing but helpful by providing the fish a temporary home as well as the arsenal of food products, and to Koji Wada, who so kindly obliged to our request for this fish.

** We’ve had numerous success with ReefNutrition APBreed TDO chroma boost, as well as the older Otohime pellets. Wild caught Centropyge bicolor, Apolemichthys arcuatus, numerous butterflyfishes and even this multibar angelfish took readily to this feed without much issues. Definitely a product we recommend for finicky fish.