Cirrhilabrus squirei gets range extended like a trailing caudal fin

Cirrhilabrus squirei, one of the newest additions to the Fairy Wrasse stable, has until now only been known from a small area on the Great Barrier Reef and one reef in the Coral Sea off North Queensland, Australia. A recent find by our Clearwater skipper Tim Bennett and his son Tyson Bennett, has now extended the range to include a remote reef complex on the Northern Great Barrier Reef, an area all but exclusively accessed by Cairns Marine. 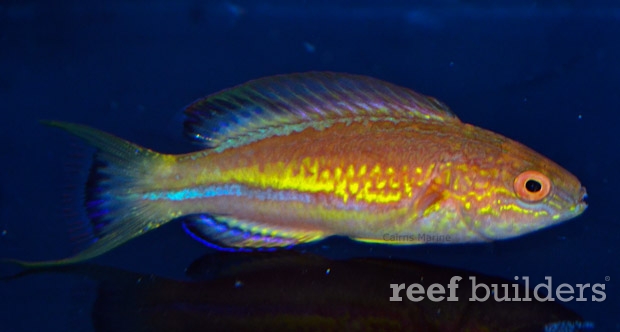 The recently discovered Cirrhilabrus squirei is one of a group of smaller, deep dwelling fairy wrasse which includes other premium species such as C. condei, C. bathyphilus, C. claire, C. marjorie, C. nahackyi and C. walshi amongst others. These smaller, light weight Fairy wrasse species are sometimes found to mix in with larger heavyweight Fairy Wrasse like C. scottorum, C. lineatus and C. laboutei in the upper limits of their preferred depths which can overlap into the lower end of the comfortable depths the latter mentioned fish prefer.

This co-habitation between wrasse species likely provides “safety in numbers” for the smaller species, and provides an early warning system of approaching predators, as they feed precariously in the water column, at times up to 10 meters (30ft) above the surrounding coral structure. Interestingly, this habitat crossover may also be a form of mimicry of the juveniles of the larger species. The adults of the smaller labrids appear very similar to the juvenile and sub adult forms of larger species which lack the brighter patterns of the adult and terminal phase of the larger Cirrhilabrus. 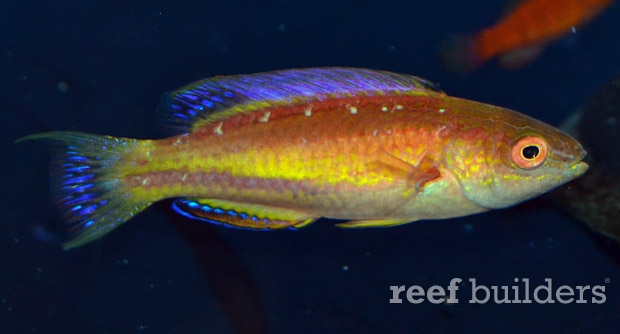 To this day only a handful of Cirrhilabrus squirei have made their way onto the world aquarium market. Due to the technical depths they prefer and the resulting safety issues that go hand in hand with their collection, it is unlikely that they will ever become ‘regular’ in hobbyist aquariums except for those of the specialist wrasse collectors. If they do turn up in other areas or in greater numbers, you can rest assured that their popularity will continue to grow and that you will most likely hear about it first, right here on Reef Builders.

A look at Fluval's new website, another major change for the aquatic giant