End the Toil and Trouble of Bubble Algae

“Bubble, bubble, toil and trouble” could be the lament of any marine aquarium hobbyist battling a stubborn outbreak of green bubble algae. (Okay, “Double, double toil and trouble,” is the actual incantation from Shakespeare’s Macbeth, but I digress.)

Green bubble algae appear as rounded or tubular green bladders ranging from about the size of a small pea to approximately quarter-sized or even larger. Contrary to popular misconception, there isn’t just one species of bubble alga; rather, several species representing various genera (Ventricaria and Valonia among others) are known to appear in aquaria.

Bubble algae present hobbyists with something of a dilemma. On the one hand, the shiny green vesicles can actually be quite attractive and interesting to look at, thus tempting the hobbyist to leave them in place. Indeed, in a balanced system with dissolved nutrients kept well under control, the presence of a few vesicles here and there is no cause for panic and merely adds to the biodiversity.

On the other hand, if conditions are—or ever become—conducive to explosive growth, the bubbles can rapidly reproduce to plague proportions. When this happens, rocks, coral skeletons, and other hard surfaces can become coated; vesicles attached at the base of coral specimens can actually displace them from their attachment site; and loose, drifting bubbles can clog powerhead intakes, substrate vacuums, overflow tubes, etc.

Thus, it’s generally wise to prevent bubble algae from arriving in your tank in the first place and to take steps to eliminate the algae early on if it does appear. Here’s how:

Bubble algae very commonly make their way into aquariums attached to live rock. Check newly acquired rocks carefully for vesicles and remove any that are discovered before placing the rocks in your system. This is one of the reasons it’s highly recommended to quarantine new live rocks just as you would a fish or invertebrate specimen. Also, be sure to closely examine the rocks/plugs/disks to which coral specimens are attached, as bubble algae often hitchhike their way into aquaria aboard these materials as well. 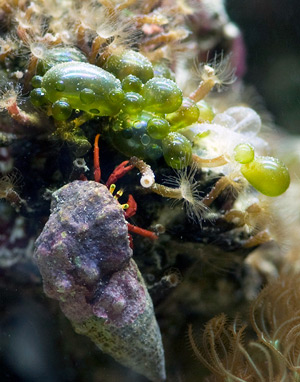 Manual removal of vesicles (coupled with dissolved nutrient control) is the most effective means of eliminating bubble algae. The vesicles will often detach very easily with just a gentle wiggle, though some varieties are more stubborn and may need to be dislodged with a sharp flathead screwdriver or chisel. Heavily coated rocks can be removed from the tank and plucked/brushed/chiseled clean in a separate bucket filled with salt water.

When manually removing the bubbles in your aquarium, take care to avoid rupturing them if possible, as doing so will release the spores contained within, potentially aggravating your problem. The larger the bubbles get, the easier they are to rupture.

Also keep in mind that the vesicles can grow in some surprisingly shady areas, so you’ll need to check underneath rocks and carefully feel around behind rock stacks (preferably while wearing protective gloves) to make sure they aren’t happily growing and reproducing somewhere out of sight.

Herbivorous species, such as tangs and rabbitfishes as well as the popular emerald crab (Mithraculus sculptus) can assist in controlling an outbreak of bubble algae. However, don’t expect these animals to work miracles. From my experience, herbivores do a much better job of preventing bubble algae from regrowing after manual removal than they do of actually eating the vesicles that are actively growing.

What’s more, no organisms should ever be introduced to an aquarium system for utility purposes unless the tank is large enough to sustain it, the specimen is compatible with all your current livestock, and you can satisfy its dietary and other care requirements once the target algae/organism has been eradicated.

With respect to M. sculptus, do be aware that these crabs aren’t as strictly herbivorous as some hobby literature might lead you to believe. If sufficiently hungry, these opportunistic omnivores may decide to start nibbling on sessile invertebrates and may even go after small fish.

As with any algae outbreak, measures to increase nutrient export should also be implemented when battling bubble algae. This includes using reverse-osmosis-purified fresh water for top-offs and for mixing clean salt water, vigorous protein skimming, and frequent partial water changes. A desirable macroalgae, such as Chaetomorpha (“Chaeto”), growing in a lighted refugium will also help combat the problem by taking up dissolved nutrients that would otherwise fuel the growth of the bubble algae.

How have you beaten bubble algae?
If you’ve ever done battle with bubble algae and won, please share your successful strategy with your fellow salties in the comment section below!