From the Archives: Think outside the box with 115 gallon reef bowls

Dave Lackland’s write up on his unique 100 gallon reef bowls four years ago has been one of our most popular stories since it was first shared more than four years ago. We have recently learned that Dave is relocating to the Caribbean and had to let go of his supersized reef bowls.

It was just in time too because they were beginning to warp from the pressure and generally aged from the harsh environment of a reef aquarium and natural sunlight. This lead image of the 70’s chair-turned-reef-aquarium being picked up by trash collection is a beautiful reminder that reef tanks don’t last forever, but they can bring us great joy and fascination during their lifetimes.

Hi! My name is Dave Lackland and I was raised and educated as an artist. I have 30 years experience creating and maintaining marine aquaria so when it came time for a show case system in my own living room, it had to be something different, something that would make friends and visitors smile and /or laugh. Living in the subtropics of the Florida Keys, I was eager to employ natural sunlight as the primary light source for the project, yet was indecisive as to what shape, form or size. Rectangular and square systems are the norm,  I had set up my share of those,   I’d seen many well done cylinders, so that was out. The  tongue-in-cheek humor of a giant fish bowl  filled with marine invertebrates and fish  just kept popping into my head.

I knew the bowl was out there, the vessel itself, something pre-made for a different  application. Not sure where to start,  I began looking into and even purchasing a couple large light-globes for giant event-style parking lot lighting fixtures.  One held 36 gallons, but was smoke-y;  the other had an exaggerated “seam” and was gray in color. One night in bed I woke up  and it just hit me,  Aarnio Eerro’s  “Bubble Chair”!  A clear acrylic hanging ball chair designed by  Italian artist/designer Aarnio Eerro that  has appeared in hundreds of commercials and advertising photo-adds since it’s creation in 1968.

I contacted the manufacturing company and explained what I wanted.   I placed a special ordered; the chair was fabricated without the steel ring, chain, or cushions. I had already purchased the base, a 24″ schedule 40 slip fitting, when the bowl showed up.  It was incredibly scratched  and “crazed”, (small spider-web like cracks throughout the surface). I contacted the manufacturer, who immediately apologized and sent  a second chair within days. The replacement arrived in worse condition than the first.  I was out of luck unless I learned how to buff and re-finish acrylic. Sixty+ hours later, I had two crystal clear bowls. They didn’t want the first one back, so I ordered another  PVC coupling-stand and re-worked the design to include the second bowl.Both vessels were set in place, dry and unplumbed, for months until I was done installing the 21″ tubular skylight, (that illuminates the central bowl),  the sump, skimmer,  supplemental HQI pendant for second bowl and other life-support equipment. The second bowl is positioned in the corner of the same room, receives  natural sunlight as the sun is rising through a  set of sliding glass doors that face SE (from 7AM-10AM depending on the time of year), 4-5 hours of just ambient room light and then a second 8 hour photo-period with a single 150 10K HQI pendant  from 3-10pm. 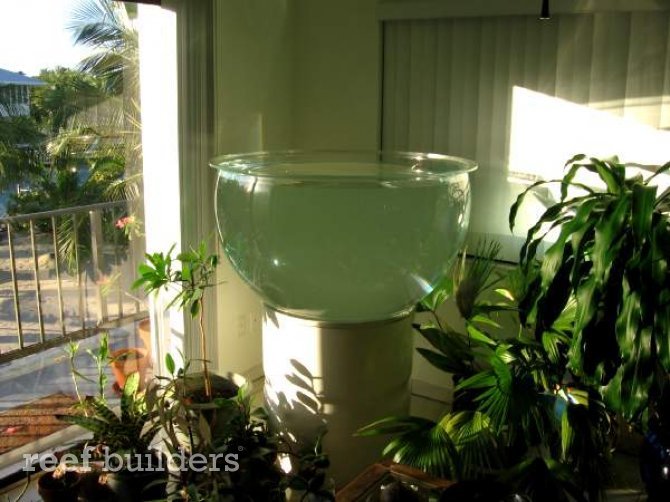 Now that everything was in place, it was time to add water and test the structural integrity of the bowls. I filled both one evening; the bowls looked  great,  felt stable, and solid.  I went to bed. The next morning I awoke abruptly to the sound of our fire alarm and the smell of smoke. This was not just any smoke; it reminded me of burning leaves with a magnifying glass as a child. As I rounded the corner into the living room, I couldn’t believe what I was looking at:

I had inadvertently created a giant magnifying glass thats concentrated “hot-spot” had  burned our wall, melted our vertical blinds, and was now torching my favorite corn plant. I just stood there for a couple seconds in disbelief.  My wife appeared behind me with her hands on her hips saying, “Only you could have created a death ray in our living room,  only you.”   I had my camera right there, the pictures of the corn plant smoking, the wall, and the melted blinds are actually taken the moment we both stopped laughing.  I snapped them before I closed the blinds that let the source light in from the SE. I knew there were going to be some  “unforseens” with this project, but never saw this coming. I spent the next morning with a guy who tints windows for a living.  As he  tried hanging different samples on the sliders, I took readings behind each one with my quantum meter. I went with a 50% tint and it still melts the blinds today.  (I just replace them when they get too disfigured.) 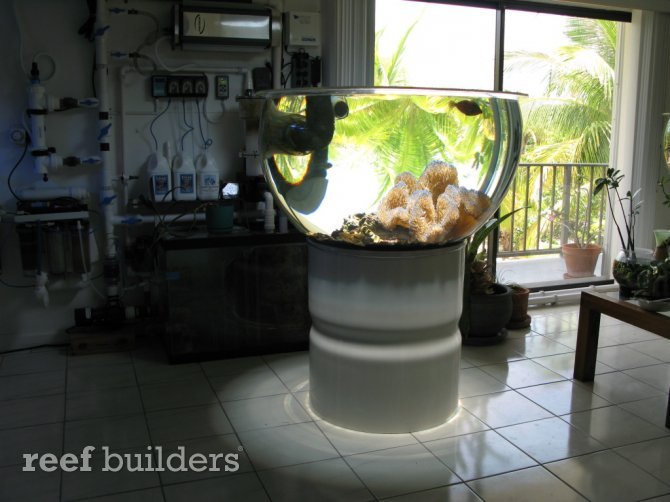 The 2 bowls are a single system sharing a communal 65 gallon sump, skimmer, and chiller.  They have been set up for over 4 years and both feature a solid coral skeleton reef bottom. They were initially intended to house corals, more of a “reef tank”  application , however many sessile invertebrates bleached and perished during summer months. Once I switched to vagile/mobile Inverts, i.e. anemones that can move to avoid receiving an overabundance of light during the summer peak, they have been nothing but a beautiful successful living sculpture and a joy to live with.
My company, Atlantic Reef Aquaculture, is currently in contract to install our first residential bowl in a client’s Key West home this coming spring.
Happy reefing everyone, think outside the box
-Dave Lackland
www.atlanticreef.com

Don’t Let the Water Flow Slow in Your Marine Aquarium

Giant staghorn corals so big they make you feel small