Like food, soccer and politics, Italians take their aquariums and actually all of their pets seriously. While we think it’s pretty good that we have several thousand people attend many of our events, that pales in comparison to the Piacenza Pet Festival that I was fortunate to attend two weeks ago and speak at.

I say that as over the two days I was there, over 36,000 people attended this amazing festival. Granted this was not just a fish, reef or aquarium show, as it also included dogs, cats, and just about any other animal you could imagine. Nonetheless, most of the people who had one of these other animals also strolled through the aquatic section, which occupied at least half of the facility, and at least three full football fields in size.

So why should you care about the pet festival that was held in Italy and what did I see that made it different from Reefaplooza or MACNA here? First, from walking around and watching and listening I quickly learned that like us, Italians are very passionate about the fish and corals that they keep. In fact, to them, keeping things alive and thriving and reproducing may even be more critical than it is for us.

I say that as, while many of us know we are over taxed, the Italian government is way worse. I say that as for most Italians there is a 55% income tax, a 23% VAT tax, gasoline is $6 per gallon, electricity is three times the cost it is here and water costs twice what it does here. And if this were not enough most of the roads are toll roads, which further adds to the cost of doing anything.

As a result of this, most people in Italy do not have a lot of disposable income. Just as with food, where they take simple ingredients and prepare them perfectly, at this event I saw that most hobbyists and shops do the same thing. That is, just about every tank displayed as well as every coral and fish were clean, healthy and thriving.

Even though I was there during set up and tear down, I did not see any fish, coral or animal of any kind mistreated or cared for in such a way that it was likely to die as a result of being at the show, the treatment of everything was meticulous and caring. All of the animals were treated as if they were the owner’s children. And Italians really love their children. Also because importing fish, corals and animals of any type is so regulated and expensive, propagation has become the rule rather than an exception. 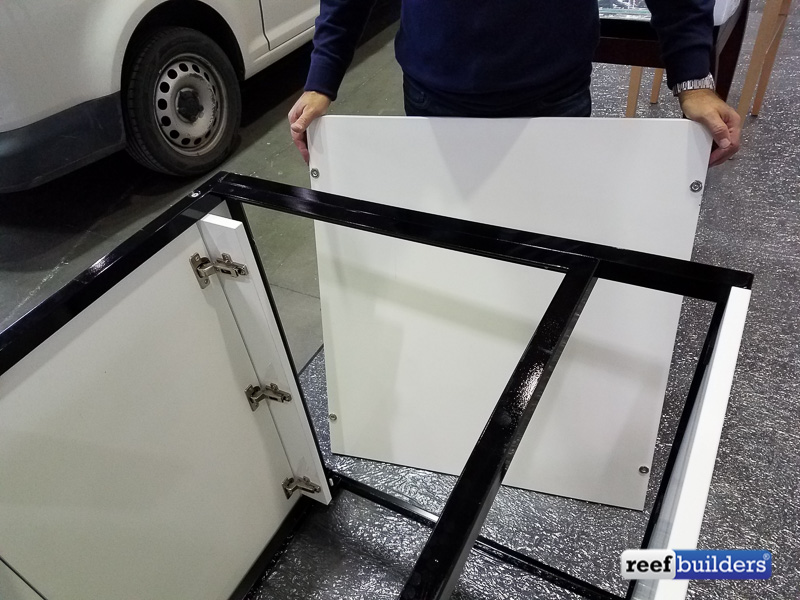 While there were full coral colonies present, probably more than I have seen at any of our shows, there was also a significant amount of frags for sale as well. However, the frags were not the ½” or less little nubs that we see here, but instead most were big 1 ½”- 3” frags and most sold for reasonable prices of between 10-35 Euros.

In addition to being different in size, they were also not captive grown, but instead were like we used to do, in that they were recently cut pieces from newly imported colonies and that were just cut from the colony and just epoxied onto plugs. When I asked if any of the shops present, and there were over 30, were growing frags in their shop and selling them, the response was always no.

When I asked why they did not do this, they said because people there do not want small frags, and by the time they could grow small frags into the sizes that were sellable due to the cost of the space to do this, they could not afford to do this. So instead, when nice colonies come in, numerous frags are cut from the mother colony and sold so that multiple individuals could have access to the frags.

Since the frags were all large and reasonably priced, I did not see any “named” corals, they sold quickly and most vendors sold out for the most part on the first day. In addition to being nice sized and reasonably priced, none of the vendors really enhanced or brought the colors of the corals by using blue lights. It was interesting to see corals all without blue lighting as they were all healthy and colorful but did not have the “pop” that our blue lighted corals have.

It reminded me of how corals looked here in the 90’s and and early 2000’s. To be honest, once I got used to it the corals were still quite appealing, and while I did see some corals I would have like to have had, for only the second time in my life I did not bring home anything from a show. While seeing the difference in how corals are sold and displayed at a show was interesting, some other aspects of the show caught more of my attention.

First among these were seeing some products that I had not seen before. These included a fully automated phytoplankton and zooplankton reactor. This reactor grew green water, which then fed a chamber full of zooplankton, which then at night was partially emptied as it dumped into the tank and then would refill itself, all according to the manufacturer automatically.

I was able to see this device working on an actual tank a few days later and I have to admit both it and the tank were impressive. I also saw an inexpensive small pump and wavemaker combo sold by Corallinea, that impressively caused a significant back and forth wave in a tank that could easily be adjusted to match the size of the tank, that for the money and size really seemed to do the trick. It was so impressive, that I bought one, yeah I had to get something.

Other impressive items were the new Elos tanks and stand. The tanks were made out of “crystal” silicone, that is silicone that was so clear that it made the tank look like it was made out of glass bonded to glass with there being no silicone. Elos also has a new stand that that has a frame built out of a stainless steel tube onto which the wooden sides and back are magnetically attached so that it is not only significantly stronger than a typical wooden stand, but the sides being attached allow for it to worked in from any side.

There was also a protein skimmer that had a three minute delay built in so it would not start until the power had been returned to it for three minutes. This may sound simple, but what it does is keeps the skimmer from overflowing should the power go out and thus the water in the sump rises so that when the power comes on the delay keeps the skimmer from overflowing and dumping its collected waste into the tank or onto the floor.

I also saw a really nice set of dosing pumps that were controlled exclusively from a phone app. In addition to being easily adjusted and controlled they also included sensors that sent an alert to the phone when the liquid in the reservoirs ran dry or if programmed correctly before they ran dry. Lastly, I saw several new LED and LED/t5 lights and light configurations, that to me were upgrades over what I had seen in use here.

Chief among these were the new Radion G4 lights, that I had not seen on a tank before. On the tank they were on, the light did appear to be crisper and sharper than I had seen in previous lights. I look forward to seeing them on more tanks here including on some I know before rendering full judgment however.

What also impressed me about this new equipment is that it was not just set up or shown, but the vendors let you play with and get to know it and many had seemingly constant demonstrations to show how to set it up, use and even maintain it. Something I do not see done enough at shows here.

The demonstrations were not just limited to equipment however as there were also multiple aquascaping demonstrations, both freshwater and interestingly for saltwater as well. I thought were especially useful for newbies getting into the hobby ho wanted their tanks to look like those of people who had been doing it for a while. It was nice to see different ideas and biotopes demonstrated and not just how to set up a sps tank.

In addition to these somewhat unique aspects of the show, there was one additional part of this show that I wished we did more when we did shows. Unlike our shows which are kind of restricted to people already in the hobby, the vendors at this show used the opportunity to introduce non-fish, but pet owners to the fun and beauty of keeping an aquarium.

As I said over 36,000 people mostly from Northern Italy all walked around this show in just a couple of days. Most probably had pets other than fish when they came to the show, however while walking around and listening, I do speak some Italian, and having my friends translate as well, it was apparent that many of the aquatic vendors at this show used it as an opportunity to recruit people into the hobby.

Seeing everything that was there and how it was displayed, I couldn’t help but think how we are missing the boat when we have these shows in trying to bring “new” people into the hobby.

As I was flying home I thought about how here for the most part people become hobbyists more or less by accident. Their parents or relative had a tank, or they see one when they go into a shop to buy food for their dog or cat, but for the most part no one really tries to explain how or why they might consider having an aquarium. Here however, that was different as no matter where I was on the aquatic side of of this show, someone was telling a non-hobbyist the fun and benefits of having a tank. And seeing how many people walked away with books, pamphlets or cards from these “recruiters” it was pretty clear that they were having an effect.

This made me curious as to why when we have shows here we rarely have any kind of joint shows with other pet lovers or even freshwater hobbyists, so we can bring in more members, and they don’t necessarily have to be reefers, anyone who gets into keeping fish of any type, may get into saltwater if they are successful, we just need to get more people into the hobby like they did there and help them succeed.

Or do we think the hobby is so big here that we don’t want any more hobbyists? Some think are we arrogant t in our thinking so that we don’t want more people to join our ranks. After being at this show and seeing how much fun everyone was having, whether they had a tank or just kept birds or tortoises or whatever, but came though the aquatic section anyway, it was clear that the Italians understand pet keeping better than we do. As a result, I think it might be time to actively expand our hobby and active recruit new hobbyists rather than just hope new hobbyists will join our ranks randomly.