Sinularia mesophotica, A New Species of Photosyntetic Soft Coral From The Deep

Sinularia mesophotica is a new species of soft coral that has just been described from the deep waters of the Red Sea. This coral is special for a number reasons, not the least of which is how deep it was found and also that at that depth it was still living photosynthetically! 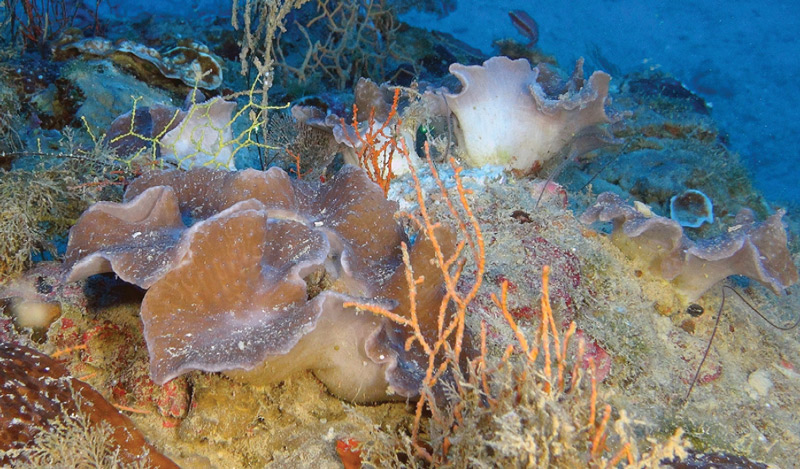 It’s not abnormal to find true soft corals living real deep, but usually these belong to Nephtheid carnation corals, or the familiar gorgonians, all azooxanthellate. But Sinularia mesophotica is probably one of the deepest records for an Alcyonid, and definitely a record for the very abundant and widespread Sinularia genus of leather corals.

The newly discovered Sinularia mesophotica was found by use of a remotely operated vehicle at a depth of 62 meters, or just a hair over two hundred feet! Surprisingly, the waters of the northern Red Sea are so clear that even at this depth there’s still enough light for this species to be photosynthetic.Interestingly, Red Sea was also the type locality of Sinularia levi, the last new species of soft / leather coral to be described.

Sinularia mesophotica is similar in general appearance to our beloved cabbage leather corals, Sinularia dura. But where cabbage leathers have a concentration of polyps on the margin of their tissue, S. mesophotica has polyps evenly distributed all over its body. Clearly they found a deep-living colony of this new species and we have to wonder how different this coral might look if it lived a little bit more ‘shallow’ like 150 or 120 feet.

It seems like there’s 20 to 30 new species of reef fish described for every new species of coral so it’s always a nice treat to know researchers are still keeping a keen eye out for novel corals. Sinularia mesophotica is described by Benayahu et. al in the latest edition of ZooKeys.

How Aquariums Are Made At Custom Aquariums