Love Coral? Tela Honduras Should Be On Your Bucket List

For the past two weeks, we’ve had the sincere pleasure of diving with the team from the Tela Marine Research Center, with another three weeks still to come! Tela is a coastal town on the mainland of Honduras, southwest of the diving mecca of Utila and Roatan.
You would be hard pressed to find Tela in any scuba diving guides, but perhaps that is why this hidden oasis has some of the healthiest Caribbean reefs we have ever seen.

Up until seven years ago, scuba diving in Tela was relatively unheard-of until Antal Brocsok, the owner of Tela Marine decided to grab a dive tank and explore his front yard. Not knowing much about diving he assumed this is what all reefs looked like.
Three years went by before he invited a group of coral scientist from the Healthy Reefs for Healthy People Initiative to check out Tela. They made a dive plan before getting into the water to survey the reef, but once everyone started descending all bets were off and the next hour was spent with wide eyes in awe of the abundance of coral.

To the untrained eye, Tela falls short when it comes to what most divers are looking for. The water can be murky with 10m (30 feet) of visibility on a good day. There aren’t big schools of fish, manta rays or whale sharks, and the boat ride is a minimum 25 minutes out to the reef.
But to coral lovers like me, Tela is a true paradise unlike anything else in the Caribbean. The reef starts shallow around 12m (40 feet) with coral covered ridges and sandy valleys around 16m (53 feet) deep. If you head northeast the ridges drop off with rocky ledges to 20m (65 feet), and then nothing but a sandy bottom. 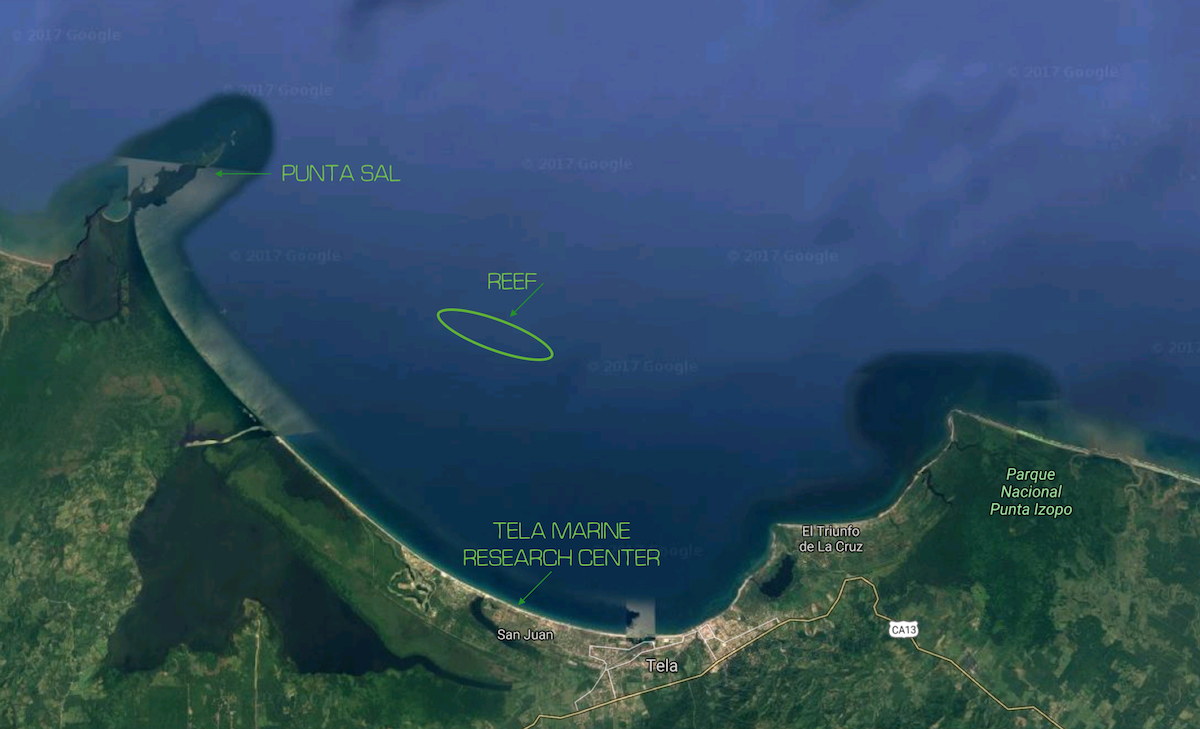 The reef is surrounded by sand on all sides, and at the moment only a patch of stony reef 10km (6 miles) wide has been explored, although this area alone is around the same size as the island of Útila. There are other rocky reef patches throughout the Bay waiting to be explored, and we had the chance to dive a brand new reef, you can read more about our discovery here.
At each end of the bay there are mixed reefs with an impressive stand of over 1200 Elkhorn corals in front of Punta Sal west side of the bay, and a shallow sponge reef near the bay’s eastern point. But the main attraction is the reef in the center of the bay.

The coral reef is dominated by Agaricia tenuifolia coral which stretches along the top of the reef. At first, it is easy to be overwhelmed by the number of tenuifolia colonies and inevitably you quickly lose track of all time and direction.
After two or three dives you start to noticed patterns in the reef where the quicker growing Agaricia gives way to clusters of Porites, Madrasis, and slower growing Orbicella, Colpophyllia, and Diploria brain corals. Along the sides of the ridges, you will find colorful Montastrea, Mycetophyllia, and Scolymia corals.

What Makes The Reef In Tela So Healthy

There are a few theories as to why this reef is so healthy, mine is that the ocean in Tela is a time vortex and every time you jump off the boat you might as well be jumping from a pirate ship. The reef is just that old!
But all jokes aside, Tela really is crazy. The reef has over 70% coral coverage compared to the average 14% found throughout the rest of the Caribbean. They also have a staggering 2-4 sea urchin per square meter of reef, which is what many experts believe is the key to the health of this reef. 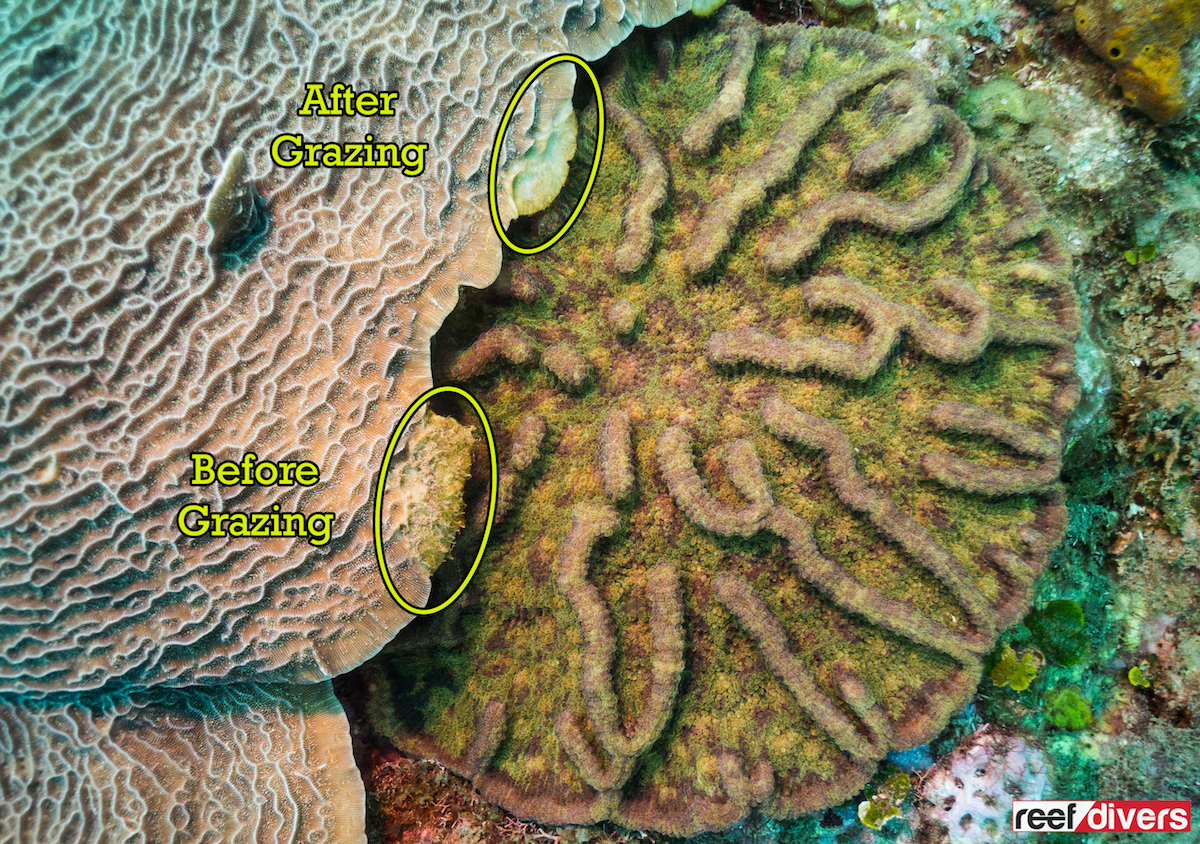 Every night the sea urchin wanders the reef grazing on any algae growing over the corals. Tela Bay is also quite high in nutrients, hence the murky water, which leads to increased growth of algae. Algae can quickly outcompete corals, so daily sea urchin manicures are what keeps the U. tenuifolia coral thriving. 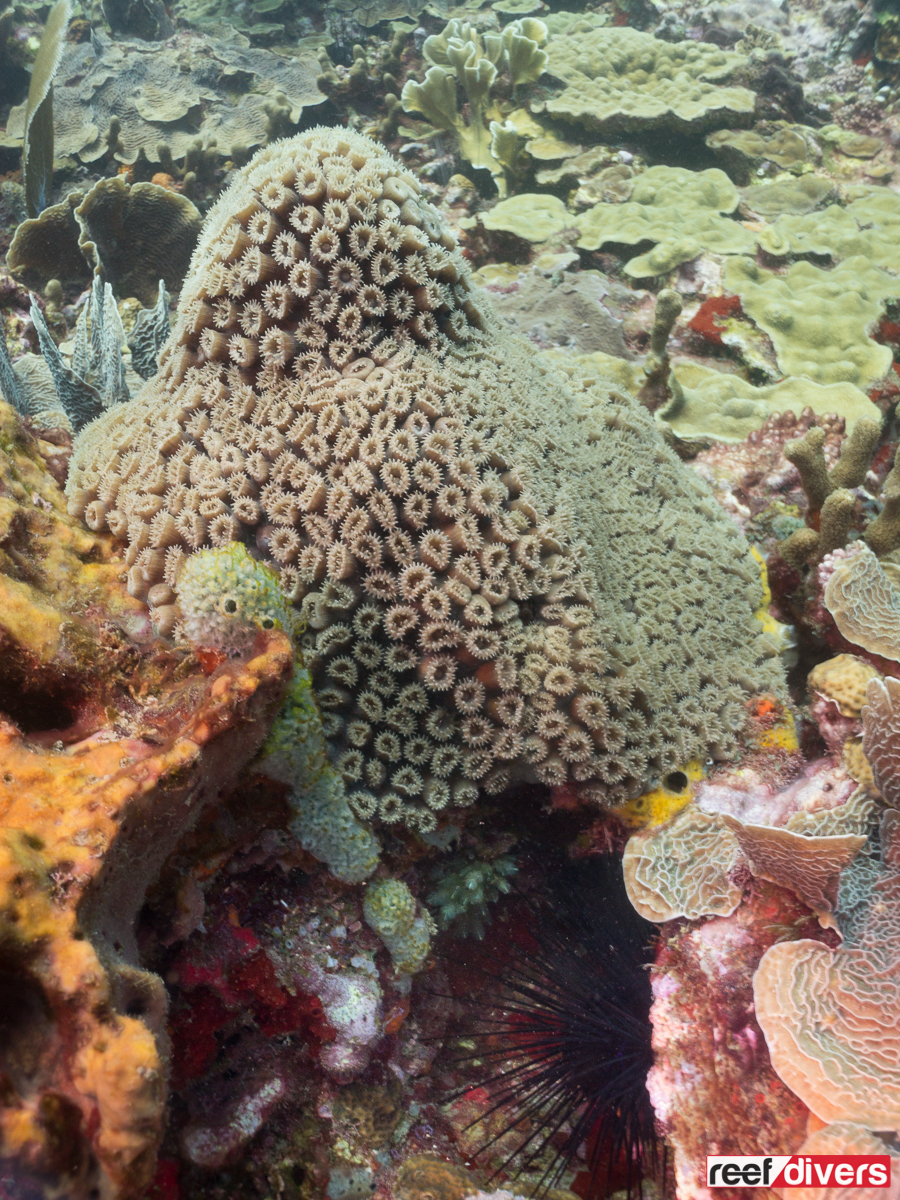 You also notice lots of large polyp corals especially in these nutrient-rich environments. These corals prefer low light conditions so the murky water reduces the amount of light which can penetrate down to the reef. We’ve never seen so many happy Montastrea corals with fully extended fleshy polyps during the day.
If you’re interested in diving Tela, it is important to know that you can only dive for half the year between April and September plus or minus a month on either side. There are two rivers at either end of the bay which means lots of sediments enter the bay during the rainy season. During the winter strong currents and low visibility prevent most diving activities.
If you would like to dive in Tela get in touch with the Tela Marine Research Center. They will help organize your dive and accommodation. You can also send them an email here.
To get to Tela from Roatan or Utila by taking a ferry to La Ceiba and then a taxi to Tela. You can also fly into the San Pedro Sula Airport and take a taxi to Tela.

Dial In Your Protein Skimmer With An Airflow Meter!