Hundreds of Port Jackson sharks (Heterodontus portusjacksoni) have been found in mass among the rock reef and brightly colored sponges of the Bass Strait and Beagle Commonwealth Marine Reserve (CMR). Scientists were surprised to find such a large number of the sharks in this previous un-explored marine reserve.
Using an autonomous underwater drone scientist were able to document the marine life of the Beagle CMR where they found the frenzy of sharks. The marine reserve was protected by the Australian government nearly a decade earlier but due to the depth between 50?70 metres, no one had photographed what was below. 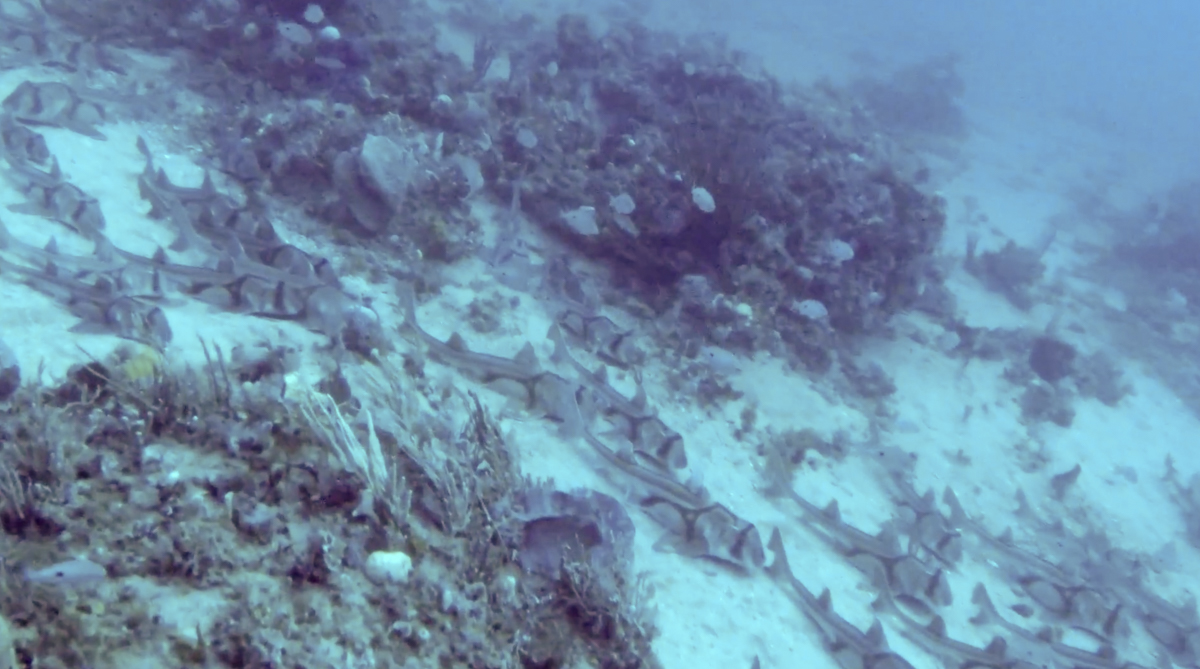 ‘This is the largest aggregation of Port Jackson sharks I’ve ever seen,’ research leader Neville Barrett of the University of Tasmania Institute of Marine and Antarctic Studies (IMAS) says.
‘While these sharks (known as ‘Sleepy Joes’) often gather in places like ledges and appear to sleep, they are very rarely seen in numbers more than half a dozen, so this aggregation appears unique.
‘We know they lay their eggs further north (typically mid to southern NSW) in August to September, so they were unlikely to be spawning, but it may have been a mating aggregation where the eggs are first fertilized.
‘This is a valuable insight to their biology, and given that this CMR is protected from potentially disruptive activities (such as trawling), it shows that a species such as this may benefit from such closures, particularly at vulnerable life history stages such as mating.’

The Beagle CMR reaches across the Bass Strait from south-east of Wilson’s Promontory of Australia to north-west of Flinders Island in Tasmania, covering almost 3000 square kilometres of seafloor. The marine reserve was originally created to protect the abundance of colorful sponges.
The voyage was part of national programs run by the Integrated Marine Observing System and the National Environmental Science Programme Marine Biodiversity Hub to survey and monitor seafloor life beyond diving depths in the waters of Australia’s continental shelf.
The surveys were carried out using the IMOS autonomous underwater vehicle Sirius. Images taken by Sirius have just been released after a lengthy processing period, and reveal that while reef outcrops in this region are rare, they support an incredible density and diversity of sponge species. [NES]

Problematic Algae And How To Manage It