Getting a closer look at the GBR’s mysterious “Blue Hole”

Besides just being beautiful, scientists look to these formations as a great resource as they collect sediment and debris that can tell a bigger story.

“Due to the sediment build-up over thousands of years, blue holes can be like time capsules for the ocean,” said Australian marine biologist Johnny Gaskell who not only explored this blue hole, but shot the video.

At around 100 feet deep, the water is perfectly still leading to some rather unique coral formations that, “…have grown into interesting shaped formations, likely due to the lack of current and disturbance from wave action. These colonies form abstract structures that seem to have no pattern, growing outwards and changing course at random,” he notes.

With the depth of this hole, these coral formations only go so far. Once at the bottom, they found mostly sandy sediment.

This formation was discovered after Cyclone Debbie hit Australia late last March where he was hoping to find a blue hole and see what corals were spared by the storm that made their way into its mouth.

It was by studying Google Maps where he found this one 120 miles away from the nearest island and visited it back in September, but was only this month that Nat Geo shared the video online. Click the image below to launch the video: 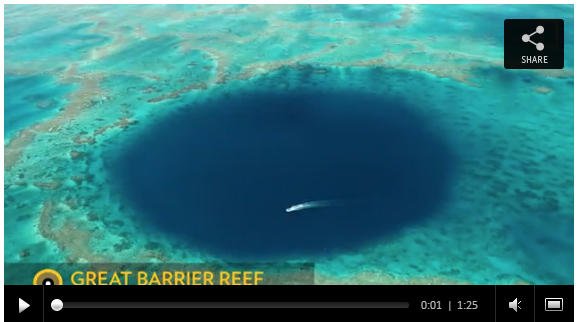 RedStarfish's new skimmer is an inception of Cones and Bubble Diffusers