Last week I have the pleasure of visiting the Cozumel Coral Reef Restoration Program run by Germán Méndez. Over the past 40 years, parts of the reef in Cozumel have seen an 80% decline in coral coverage, and when you hear Germán talking about how the reef used to be in the early 90’s it’s nothing short of heartbreaking.

Coastal development and the explosions of Cozumel as a popular cruise port has been a major factor leading to this decline. In particular, the reef Germán is restoring has been heavily damaged by sedimentation from cruise ships reversing into place. 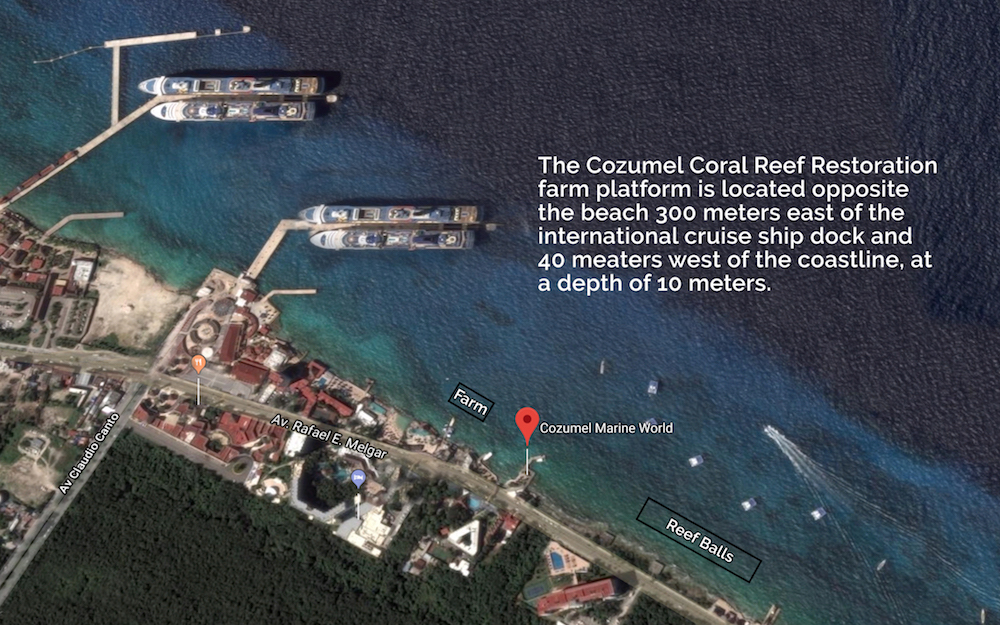 Looking at the map above, Germán’s humble project seems like a drop in the bucket when it comes to coral conservation. However, the purpose of this project is to establish a buffer zone outside of the national marine park of Cozumel.

Germán invites researchers, as well as public and private institutions to learn about coral reef conservation at his Cozumel demonstration. The site is position as a training ground for coral restoration techniques, research, and a Noah’s arc of sorts for preserving diapering corals.

The coral restoration program is set up on either side of the Cozumel Marine World pier. To the south,  Germán has a concrete platform with room for just shy of 100 coral fragments. This area is well maintained and acts as a quarantine farm. Here, newly harvested and transplanted fragments are cleaned of pests and brushed clean of algae.

Once fragments begin to heal, they are taken from the farm and transplanted to five low lying rock clusters behind the platform. This is a labor-intensive process, and the project relies on volunteers and students taking his coral restoration course to maintain the farm and reef. 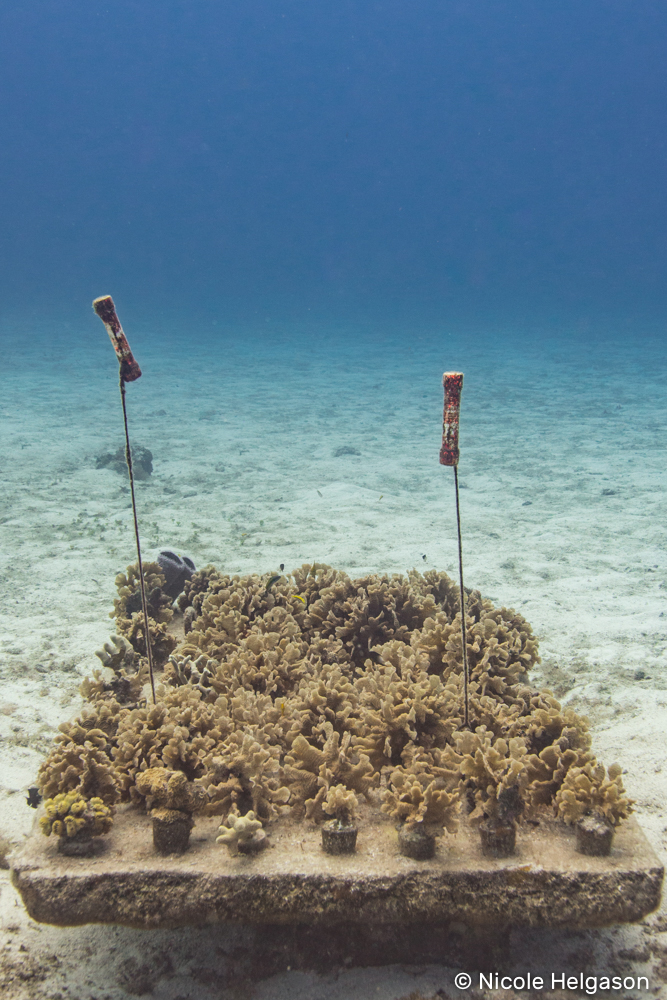 A dive at the coral farm is spent inspecting fragments, clearing open space, and maintaining the adjacent reef. Each rocky zone is mapped and the number of coral fragments planted at each rock is recorded. It’s a big job for slow-growing rewards, but for Germán, it’s the only thing he can do to mitigate damage and the loss of coral.

The quarantine table contains mostly Agaricia tenuifolia corals. The thin leafy lettuce coral has high rates of recruitment, rapid growth, and builds complex habitats. While many Caribbean restorations projects focus on Acropora species for restoring habitat, Germán has identified that Agaricia corals as a more feasible option for his reef, and with good reason.

Marine biologists like Germán are important to the future of coral reef conservation. He remembers the days when tenuifolia corals were thriving in this very same place. His approach too restoration is corals first, focusing on species that are already growing or have disappeared from this habitat, doing what he can to help the reef fight back against human development. 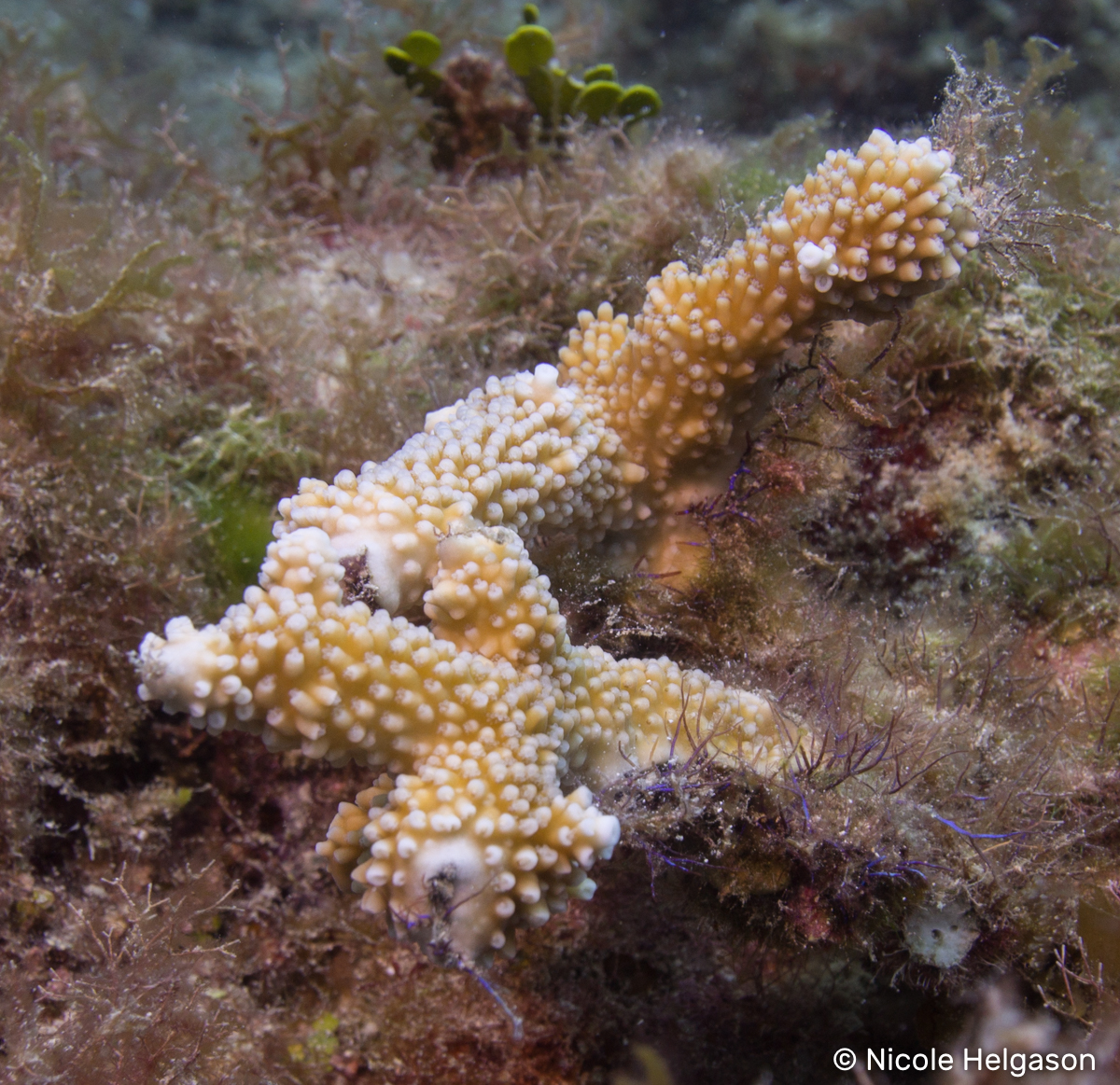 In the early days of the Cozumel Reef Restoration Program four year ago, Germán found a single branch of Acropora cervicornis, and it is one of the very first fragments planted on the reef. You can still find this original fragment, battling to stay alive.

Time is the most valuable resource underwater, with a single tank of air lasting roughly 70 minutes work around the farm. By focusing his energy on the weedy tenuifolia species, Germán is speeding up the reef-building process and regaining, structural reef habitat. 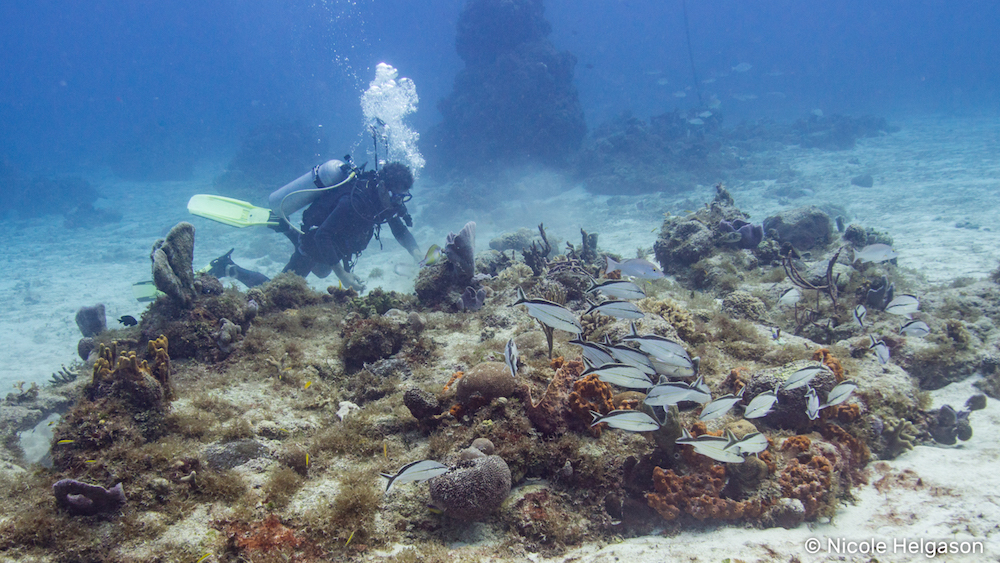 But the Cozumel Reef project doesn’t end there. The quarantine platform and rocky reefs in the south are nursery grounds for a larger project developing due north. We exit the water and head to the shore for a quick surface interval, and to switch tanks.

Despite being only a few hundreds meter apart, there is a stark difference between reefs. To the north the landscape is dominated by sponges and gorgonian corals, almost nonexistent on the farm site. Germán also pointed out to the north there is also a higher abundance of black spiny sea urchins, an important reef critter, that could be a coral gardeners best-kept secret.

Past the colorful sponge aquascapes, you will start to see dozens of coralline covered reef balls begging for an army of coral frags. Between those are famous busts cast in bronze of Jacque Cousteau, Ramón Bravo, and Sylvia Earl, and a fully functioning web cam scanning the eerie remains of what appears to be several abandoned reef restoration attempts.

The electrified Living Sea Sculpture dubbed Zoe, can be live streamed to your desktop and the creator is actively cleaning and adding orphaned coral fragments to the frame. The underwater camera is fun to watch especially while diving.

And then you have Germán. Piece by piece, day by day he gets in the water to tend his coral garden. Just last week Germán was given permission in partnership with the University of Quintana Roo to use 65000 sq meter of concrete structures located amongst the reef balls to transplant his coral fragments.

These are some of the best designed underwater platforms I have seen.  The structure design mimics the wide branches of the king of Caribbean corals Acropora palmata, and like palmata they are extremely strong and sturdy to withstand waves and storms.

The platforms reminded me of STAX, with individual modular leaves above water, that can be stacked together underwater creating unique vertical platforms. 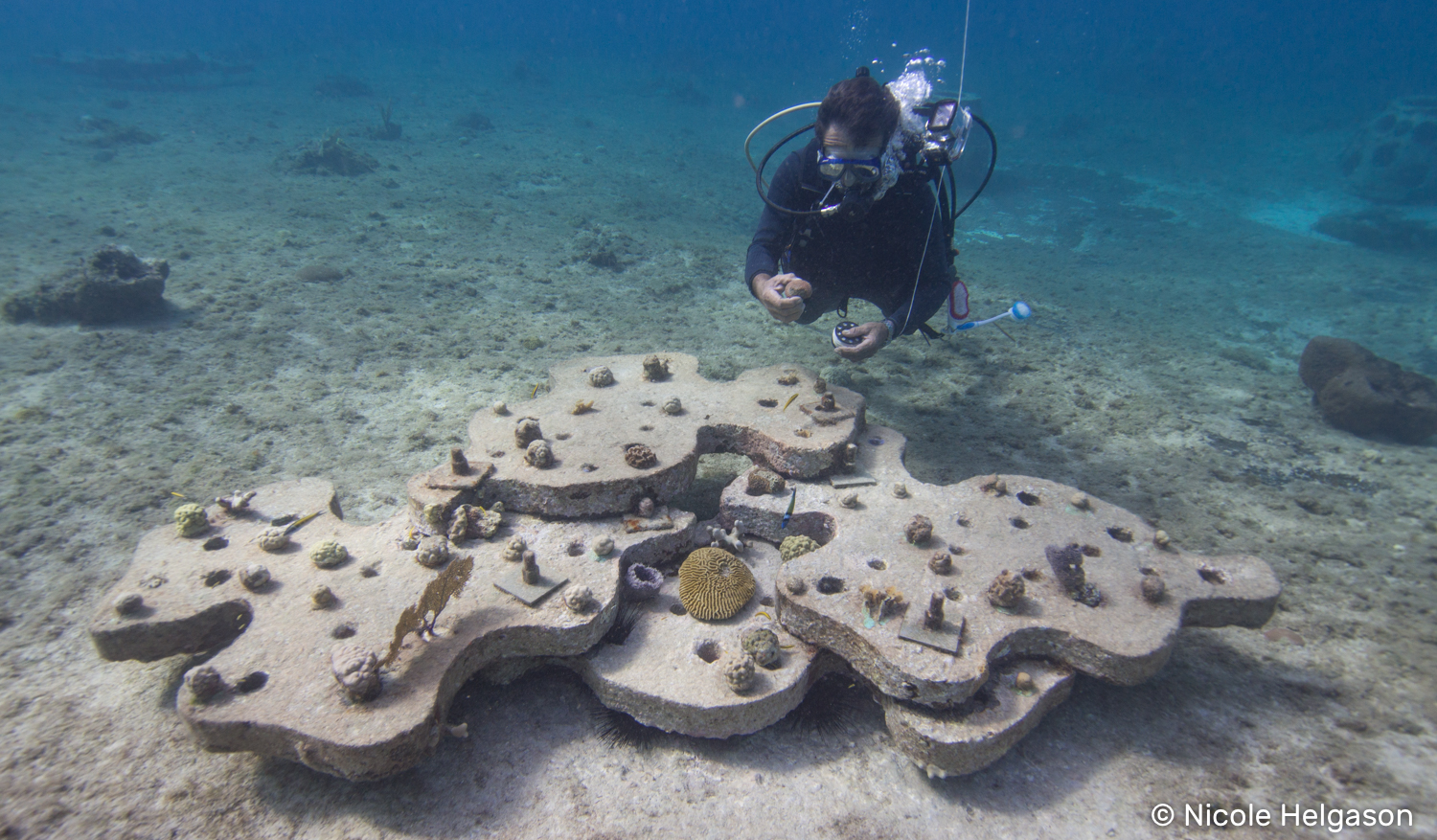 In Germán’s, two-day reef restoration course students first visit the farm site, learn about coral care, and the history of Cozumel coral reefs. Then they visit the leafy structures cleaning, and preparing them for transplanting coral fragments.

The structures already show signs of success. I found several corals colonizing the sides and of the platform. These coral appear to have recruited the frame without being planted. A good sign one day these could be full of life.

I would love to see more aquarium fragmentation technique being applied to these structures, especially the reef balls. Some of the Porites coral and other boulder corals seem to be doing just fine in this habitat, the perfect frag candidates.

And while these corals don’t add the same structural complexity of branching corals, one softball sized colony could be fragged into a dozen or more pieces used to repopulate an entire frame. What seems like cutting-edge science to ocean reef restoration projects is replicated hundreds of times each day in the aquarium hobby. All you really need is a diamond band saw and some superglue!

Understanding which species growing best in a habitat and then doing everything you can to relocate corals into a suitable habitat works. Even on a small scale, these efforts can make a difference in mitigating coral loss. 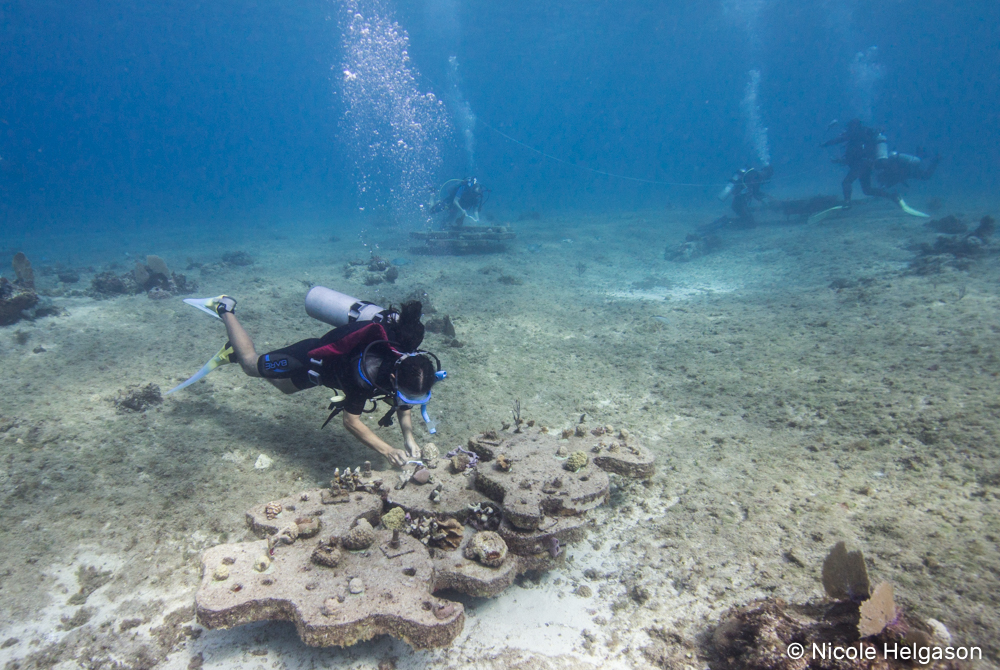 While artisinal projects like this might not do much to safeguard reefs on a global scale, their impact reaches far beyond the water, inspiring businesses, scuba divers, and future scientist to do something, and protect coral reefs.

If you would like to support the Cozumel Reef Restoration Program they are currently running a gofund me campaign. 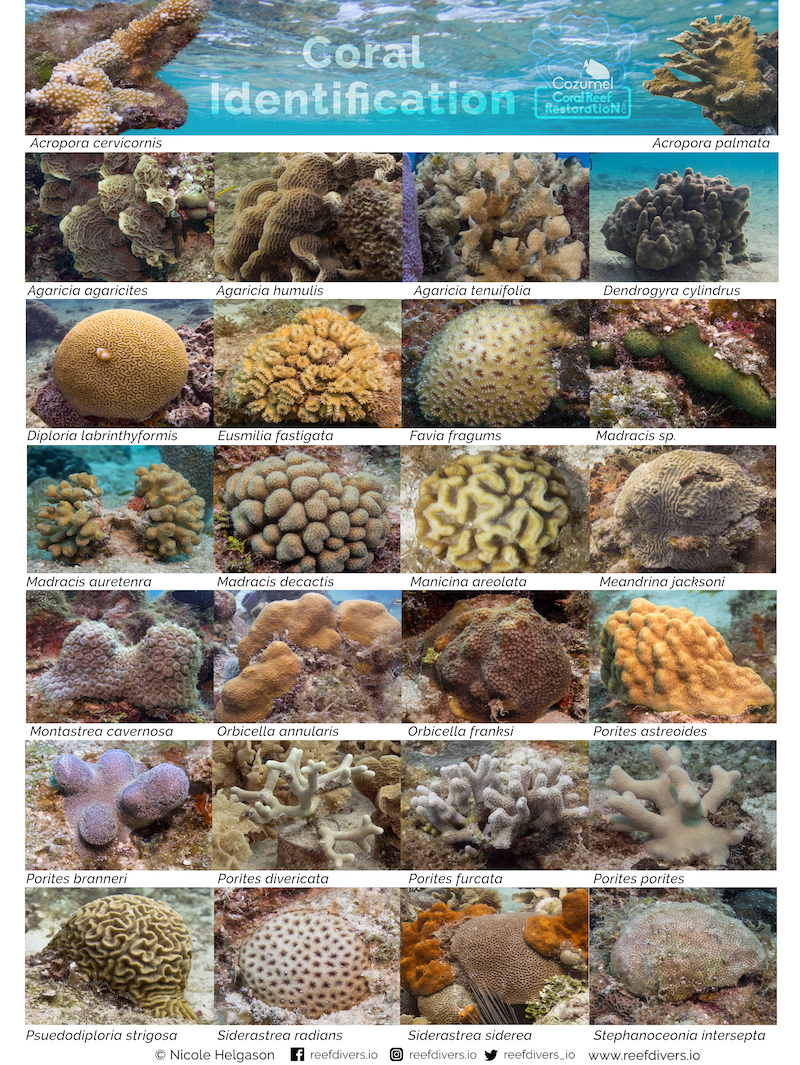 Hands-on With Six Different Dive Housings for the Lumix GH5