It’s common to find dead leaves floating around in the ocean surf, but take a closer look and you might be surprised to find a perfectly camouflaged fish mimicking these dead leaves.
Platax orbicularis also known as the circular batfish, has an interesting juvenile phase, mimicking leaves. The adult fish look quite different and are a common sight in the Indian and Pacific Oceans. 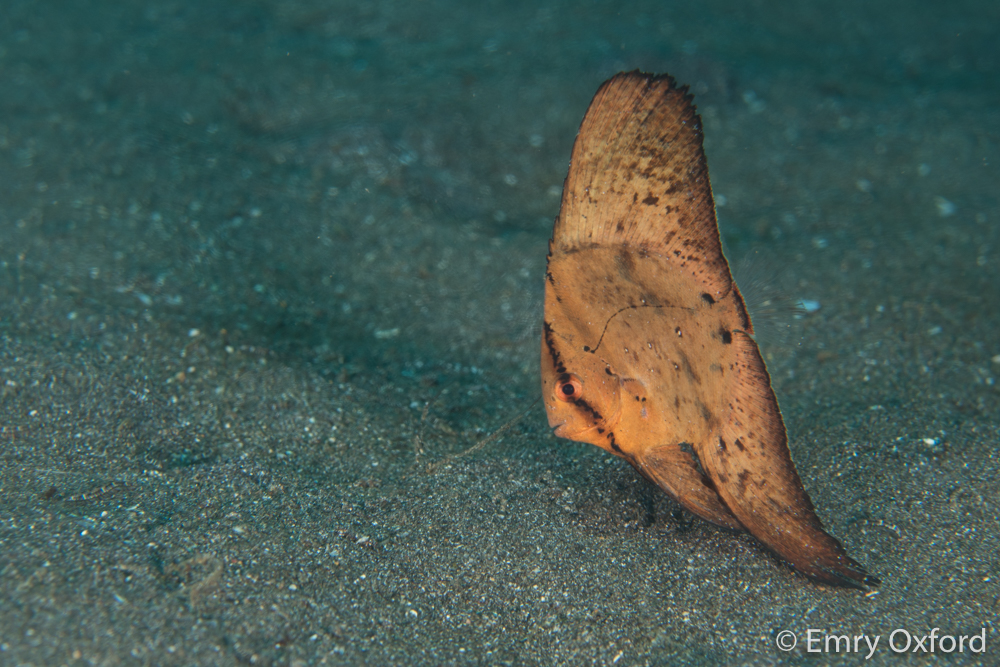 These fish are in the spadefish family because of their flattened spade shape. Adults can get to be at least 30cm (12 in) long while some of the biggest getting up to 50cm or 20 inches. while the juveniles in their rusty brown color phase are around 3-6cm
The juvenile drift motionlessly in the current and are very easy to mistake for dead leaves! Even the eye is camouflages in a dark stripe running down the face. If you didn’t take the time to stop you would easily overlook this curious fish.

The juvenile Orbicular batfish (Platax orbicularis) floats along the seafloor mimicking a dead leaf. Only a flick of the eye and subtle gill movements risk to give up his cover. Found at the Circus dive site Murex Dive Resorts Manado.

As you watch the batfish being knocked around, at times you can see the flick of his eye, or small movements in the gills. These are the only cue that might blow his cover!
Below are some closeup shots of the same fish taken by dive buddy Emry Oxford.

And what a transformation! The adult stage of this fish looks nothing like the juvenile. Adults are silver with a faint dark bar through the eye, and a bright yellow dorsal fin. You can often find these fish swimming in groups near the surface.
We found this fish while diving at the Circus dive site in Manado Sulawesi.

You Won't Believe The Age of this Tank-Grown Trachyphyllia