The First Ever Longfin Angelfish also Happens to be A Conspic Hybrid!

Poma Labs, the angelfish aquaculture project of Dr. Matthew Wittenrich is now the proud breeder of not just one, but a second hybrid conspicillatus angelfish. Last year when they debuted their clutch of captive bred conspic angelfish babies, they also announced that they had successfully raised a single conspic x blueline hybrid.

Now nearly a year later Poma Labs has had another hybrid success, but this specimen is more than just a little special. Not only is this specimen an uber rare conspic hybrid, but it is also developing elongated fins! To be clear, these aren’t the ragged, split and stiff fins of longfin clownfish but these are the long continuous flowy fins that we normally associate with freshwater fish such as freshwater angelfish, cichlids and livebearers.

This conspic hybrid is actually developing quite differently from the original conspic x blueline from Poma Labs. Despite being only six months old the Poma Labs longfin conspic already has a well developed blue eye ring and it appears to show hybrid vigor, being larger than similarly age conspics at 2.5 inches long. 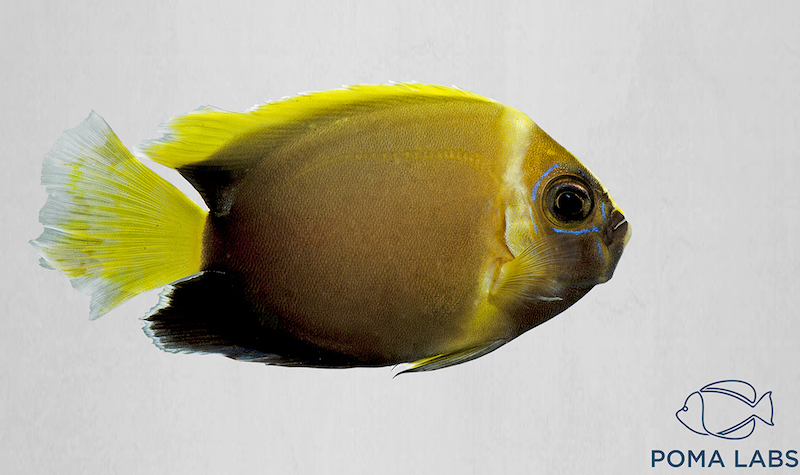 As if Poma Labs’ first conspic x blueline hybrid wasn’t exciting enough, their new longfin variant is turning out to be an incredible specimen with the elongated fins give this fish a truly one of a kind appearance. Furthermore the conspicuous and blueline angelfish which produced this fish are no longer together so this will surely be the last Poma Labs conspic hybrid for quite some time.

Poma Labs would consider selling this exceedingly rare longfin conspic hybrid to the right collector, but it’ll be just as well if they decide to hold onto this little guy for future breeding projects. [Poma Labs]