Acropora palmata, the Elkhorn Coral, is the king of all Caribbean Coral Reef species. Acropora palmata grows into thick robust branches and is the most important reef-building species in the Caribbean.
Acropora palmata was once a dominant species in the Caribbean but unfortunately, there has been a 90-95% reduction in abundance since 1980. This species was once so abundant that entire regions of the reef were called the ‘Palmata Zone’ and it was important to know where the palmata zones were because their sturdy branches easily sank ships. 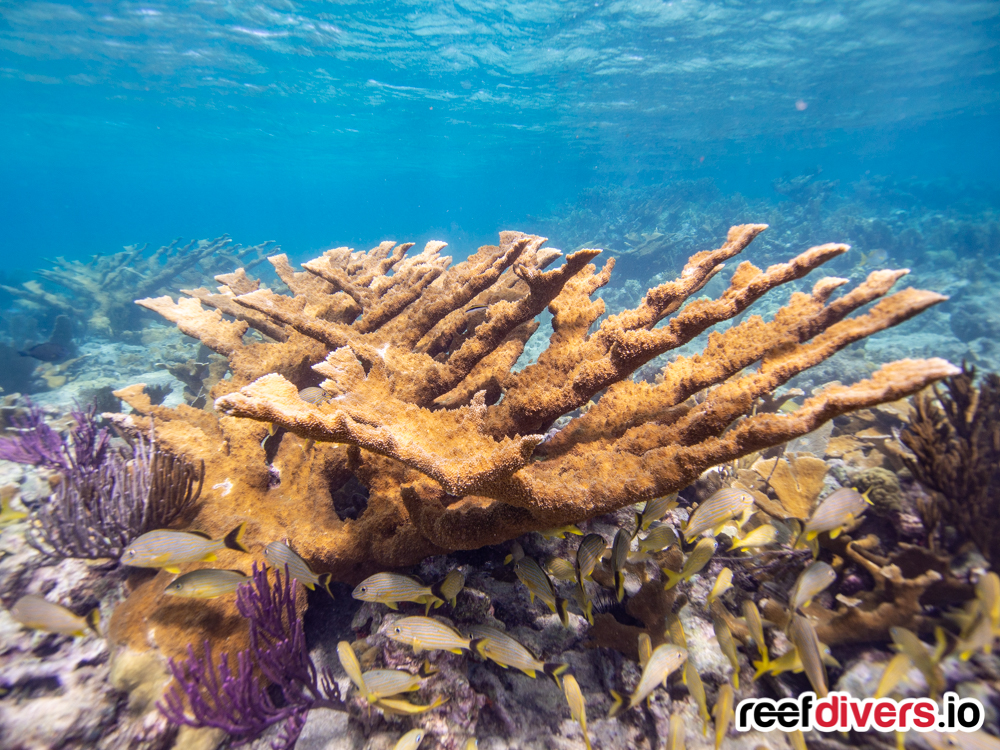 Once the most iconic Caribbean coral, Elkhorn Coral, is now the poster-child for coral reef decline and is listed as critically endangered. Despite its rapid and dramatic decline in the 20th century, there are still some places in the Caribbean where Elkhorn coral is holding on, and still dominating certain regions of the reef.
We found just such a reef while diving in the Gardens of the Queen, Cuba. The shallow wave-washed reef is only accessible for snorkelers and no diving is allowed to further protect this iconic Caribbean species.
In this same habitat, we found large boulders of Psuedodiploria brain coral, Gorgonian sea fans. Also found mounds of Star coral, Starlet coral, Pineapple coral, a few Pillar corals, and a colony of branching Porites finger coral.

The common name for this coral is the Elkhorn Coral, because of the flat branches that grow like a crown of antlers. I don’t think we need much explanation for identifying this species as it has a one of a kind appearance.
If you’re planning a trip to the Gardens of the Queen, make sure to request a snorkeling trip to this magnificent Elkhorn habitat. We went diving with Avalon Liveabord.
See also  Carribean Coral Fluorescence Featured in Neon Video

Bring Corals Closer with the DeepSee Magnified Viewer from Flipper