The Montipora That Wanted To Become An Acropora!

While diving in Australia inshore reefs together with Ultra Coral Australia, we came across some funny looking Montis.

Australia inshore dirty, turbid reefs are a Coral disease and parasite paradise. All classic coral diseases are available in a short dive. Most of the stress is due to runs off from intensive sugar cane plantation on poor soils, and forest cutting for coal mines.

These very stressed reefs are home to the full range of coral parasite possible. But one of them was particularly interesting to us, as we’ve seen it several times, over few dives. We spotted some very weird looking Montis that almost looked like Acros. 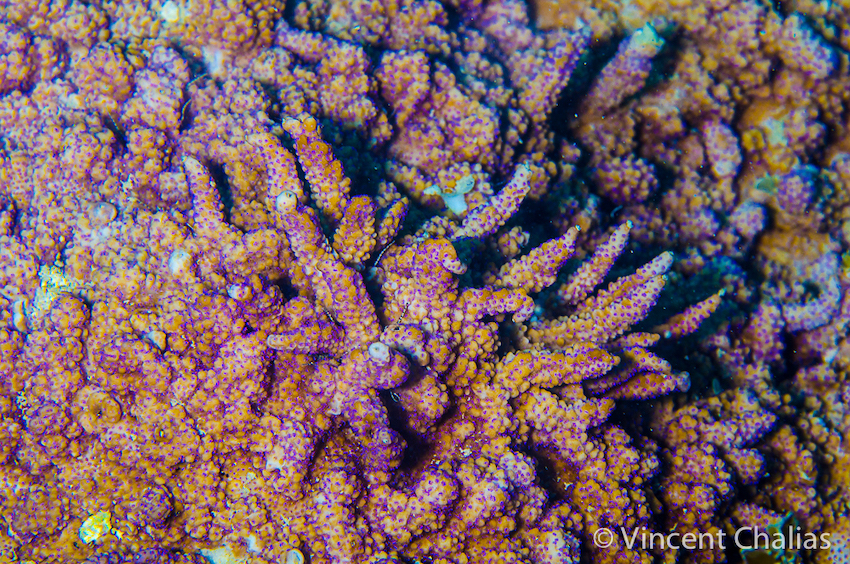 But after careful inspection, we discovered that the branching effect was due to the growing of a normally encrusting coral on the tube of some sort of barnacles. The opening of the crustacean was very similar to an Acro axial coralite opening. Even some tips were differently colored, like an acro, due to the newly grown coral edge.

Barnacles are plankton filter; they use their spear shaped antennules to bore into the coral tissue for settlement, and then grow within it afterward. They feed on plankton, using their cirri (grown out of their thoracic limb) thus they prefer shallow water coral species, with better access to reach shallow water. Barnacle build a shell on which the coral grows, they extend out as the coral grows out.

Most species of coral barnacle are species specific, growing always on the same genus or species of coral. Suggesting they are very specific to their host metabolism.
Some barnacle, have been discovered to be parasitic to the coral, it gains control
over certain metabolic activities of the coral including, calcification, proliferation
of coenenchyme and nematocyst discharge.

So the crustacean can get the coral to build him a shelter to its liking and not waste energy producing a shell. In this case it looks like the barnacle gets the coral growing a kind of branch to extend the crustacean outward and give it better position in the water column to access food.

Some species with reduced cirri like the one shown on the pictures have even been proved to be feeding on the coral tissue. So if you find some on your corals, it’s actually better to just get rid of them. Poking them with a sharp tool is usually enough. But their presence is actually a sign that the coral comes from rich water, and had access to plenty of food. So you probably should feed them properly.

The Therapeutic Effects of Saltwater Aquariums