Nestled between two indistinct flagpoles within a remote Solomon Island passage is what we can only describe as one man’s quest to preserve coral diversity. A labor of love fifteen years in the making, Simon’s Nature Reserve is a true testament to the power of long term coral conservation. 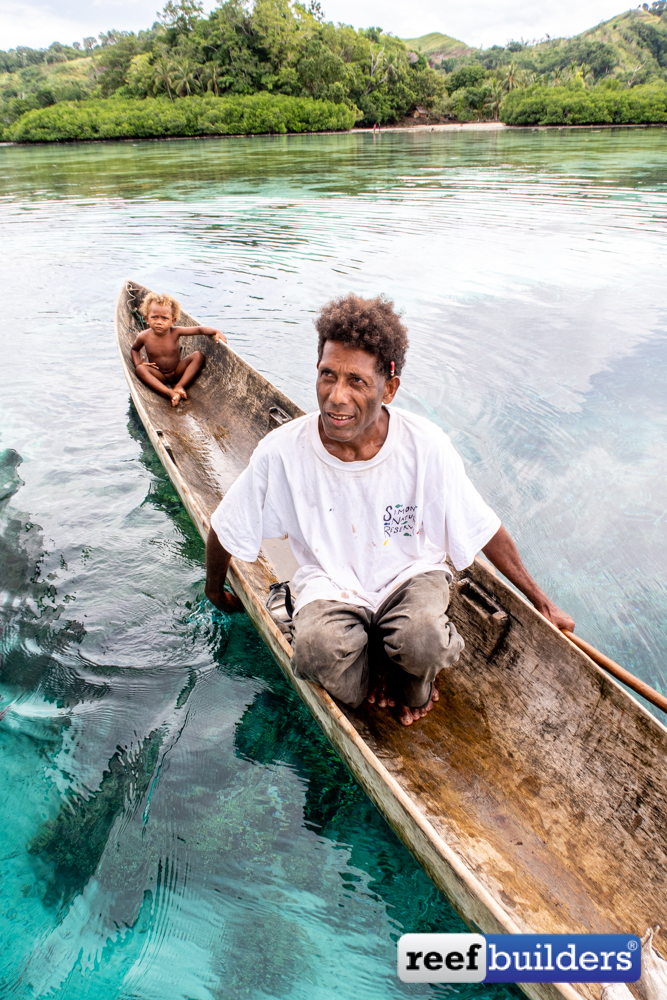 As our boat approached the western shoreline of Sandfly passage, a man came paddling out in his dugout canoe. Simon reached our boat with a friendly hello and started telling us about his personal marine protected area.

Since 2004, Simon has been collecting corals around the island, and carefully manicuring his home reef. He removes predators like crown of thorns and Drupella snails, but most of all he doesn’t allow anyone to fish on his reef.

He says sometimes there are fishermen from other villages who come and poach fish, but for the most part, his little nature reserve is a garden of Eden for over 80 genera of coral, as well as a refuge for juvenile fish. 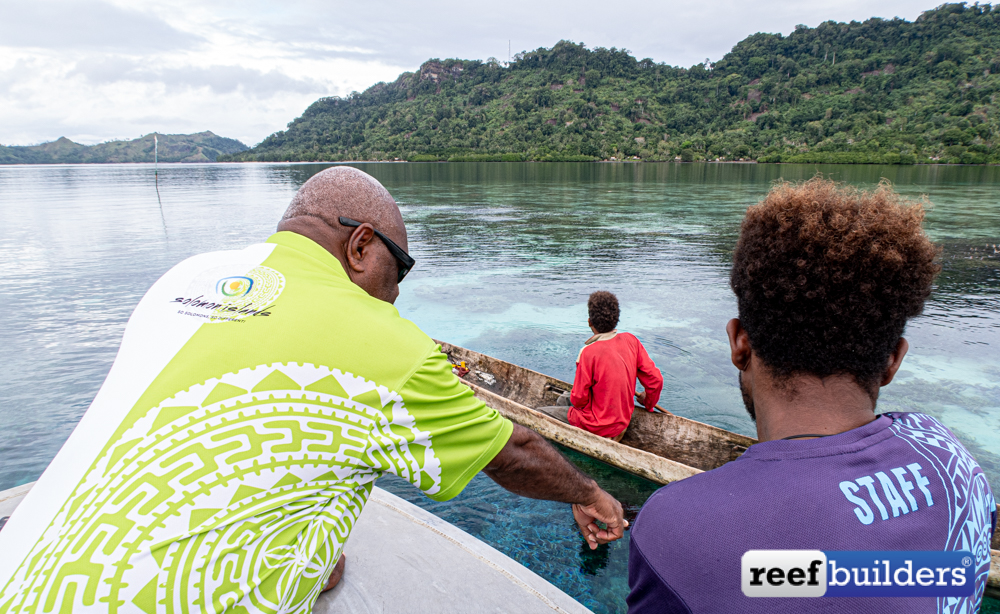 Even before jumping in the water you are surrounded by corals. The calm protected bay, clear water, and shallow coral colonies glisten beneath the waves. We heard it would be possible to find the infamous purple monster coral in Simon’s Reserve, so we started coral spotting from the boat, planning our decent.

All this coral spotting had our mouths watering, and once in the water I must have died and gone to CORAL HEAVEN!! Simon is a master ocean gardener with a keen eye for unique coral varieties.

The shallowest parts are filled with thickets of branching staghorn Acropora. Purple, blue, green and cream. We’ve never seen such a healthy dense coral forest. And you thought your frag tank was full! The more we explored, the more hidden gems appeared.

Simon told me he knows all the corals on his reef, and is still finding new varieties around his island. Talk about coral seed bank. Simon is truly preserving the genetic diversity of Solomon Island corals, or at least the corals from his home island in Sandfly Passage.

We found some purple monster on the far end of the reef, part of his newest extension of the reserve. Mixed in we found more purple corals, some bright Montipora, some thick branching Acropora digitifera, and what looks like a pinkish blasto/micromussa.

But the piéce de resistance was three bright turquoise acros, which the pictures seriously do not do this coral justice. We tried our best to adjust the colors to what we saw on the reef but this bad boy was screaming neon turquoise like nothing we’ve ever seen. Simon’s Screaming Staghorn?!

Before leaving Simon showed us his list of corals. This guy could name most of the corals by scientific name. Over 80 genera listed, and if the pink one we photographed was a Mussid of sorts looks like it will be a new one for the list!

For about $50 Solomon Dollars per person, Simon lets people snorkel his reef. A small price to pay knowing he has spent years collecting and maintaining this spot. Simon told me he also uses this reef to educate his neighbors about the importance of keeping corals and stopping to fish, so that baby fish have a place to grow up.

His model of coral conservation has paid off. There are noticeably more fish hiding among the reef. And he’s figured out a way to make money from his efforts. Simply pull up between two flagpoles and wait for Simon to paddle out, ready to share his reef with the world.