Various urchins are among our favorite invertebrates to introduce to our reef tanks as part of the so-called ‘Clean Up Crew’. Among these the mild-mannered and attractive tuxedo urchin, Mespilia globulus, is one of the best since it grazes all manner of undesirable algaes, and don’t tend to knock corals and frags over, the way that large snails and hermit crabs do.

While they might be a little on the gentle side, tuxedo urchins love to pick up and collect random loose bits around the aquarium, especially loose shrooms, zoanthid polyps and pretty much anything they fancy. We’ve had a particular specimen of tuxedo urchin that has carried a loose piece of green star polyps that we’ve enjoyed through various tanks for over three years, but finally found a compelling reason to break up this friendship. 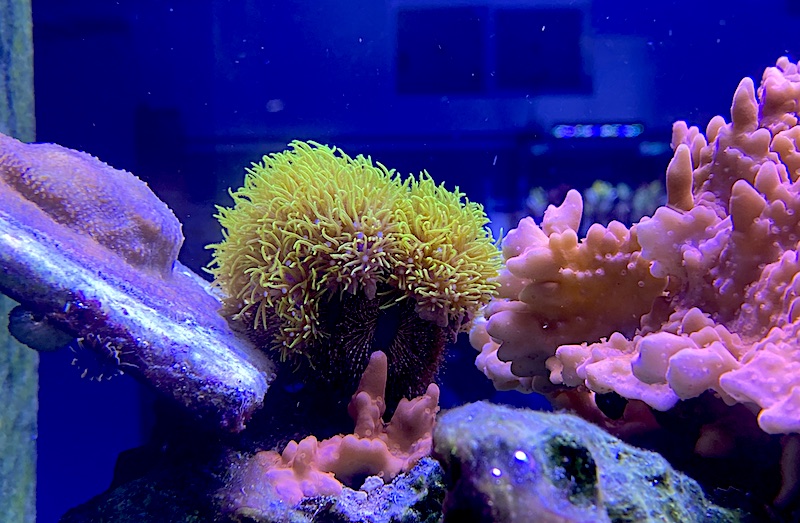 But this growth confinement was not a permanent solution because in time the GSP ‘hat’ did reach the outer edges of the urchin, and therein lied the problem. Once the tentacles of the polyps reached more widely around the urchin, it then became able to sting any corals that the urchin happened to be grazing close to.

After a few corals showed a mysterious, localized tissue recession, we eventually noticed that these were confined to preferred pathways of the GSP-covered urchin, and even caught the problem in the act. It was a long, fun ride to have a GSP-covered tuxedo urchin for so long, but now that the potential danger has become clear, we’ll be more diligent about not leaving loose corals and polyps in tanks where urchins are kept.