The Reef Flare is a new line of LED aquarium lights from Reef Factory that will be available in three sizes. The black box design with its top mounted heatsink and fan and the multicolor LED cluster doesn’t score any points for originality but could make up for it in other ways. 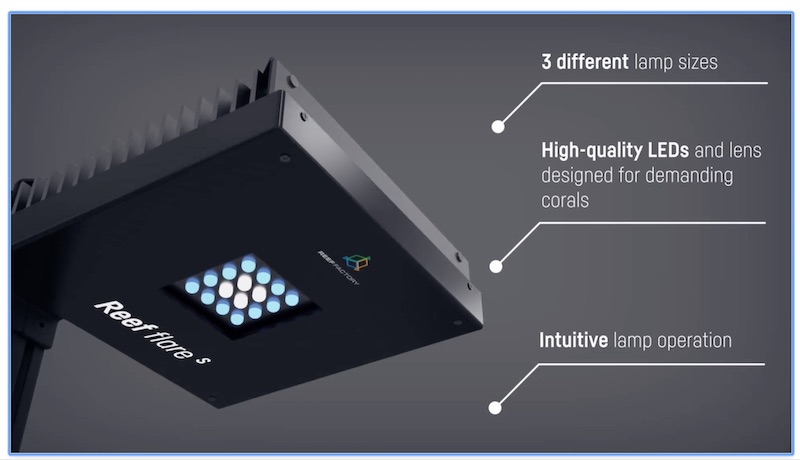 Each LED cluster is made up of a rich blue spectrum provided by blue, royal blue, violet and UV LEDs plus cool white, red, and green diodes to balance out the color. Each cluster is capable of seven channels of color control for a total of 60 watts each. Each LED is supported by a bubble style wide diffusion lens for maximum coverage and optimum color blending.

Like all things Reef Factory, the Reef Flare will work seamlessly with their app-first approach to controlling their ecosystem of smart devices, the experience of which will determine how much people really get the most out of this light. As mentioned there will be three sizes of the Reef Factory Reef Flare LED, coming in at one cluster in the small, two clusters in the medium, and three clusters in the large Reef Flare LED.

The 60 watt, 120 watt and 180 watt Reef Flares will be priced at 350€, 650€ and 900€ each respectively which positions them in an intermediate position in the European lighting market. The smallest Reef Flare with is 60 watts of power is priced significantly higher than incumbent lights from Aqua Illumination and others but the 120 watt medium and 180 watt medium and large Reef Flares propose a little more value and a different power bracket than competitors.

Ultimately it will be interesting to discover how well these work, how quietly they run, the cost and user experience of mounting or hanging these lights but most of all, how corals look under them. We’re still really hoping to see some of Reef Factory’s most interesting accessories get a 110v revision but we’ll be sure to spend some time with them at InterZoo 2020 in Germany later this year.

The Endurance of the LifeReef Venturi Protein Skimmer

The Quest to Create an Enormous School of Golden Sweepers