Maxspect Coral Putty is Everything Epoxy Should Be

When Maxspect Coral Putty first came across our review desk, we didn’t think much of it as we’re not the biggest fans of typical 2-part epoxy. However while doing some unconventional aquascaping yesterday the Coral Putty really demonstrated how incomparable it is to the AquaStik and HoldFast tubes of olden days.

The collective distaste for epoxy putties is well deserved since the typical grey or pink stuff barely works in nearly all use case scenarios – it’s hard to work with, takes forever to fully mix, and even longer to actually cure. Then when it finally sets the epoxy shrinks a little bit, usually defeating the attachment purpose of why it was used in the first place. Add to this the residue it leaves on our hands, the interference with protein skimming that it causes, and tendency to crack and crumble over time makes 2-part epoxy putty only useful in a last ditch scenario. 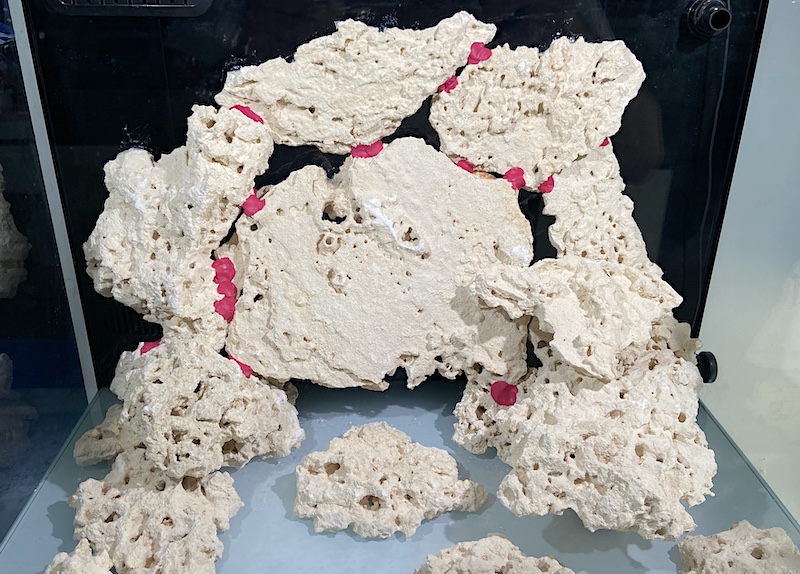 With all of these detractions going for it, you can’t blame us for not having any epoxy putty around, but we did have some Maxspect Coral Putty and decided to give it a try with very low expectations. If this putty was anything like normal epoxies we wouldn’t be telling you about it but the Maxspect putty is nothing like we expected, not even close.

This silicone based putty is very soft, making it very easy to knead and mix up, it starts curing very quickly, and hardens lightning fast – you’ve got 90 to 120 seconds from the start of mixing to initial curing. The Maxspect Coral Putty started curing and hardening so fast that it took us by surprise and we had to adjust by mixing up much smaller amounts of it at a time. Since it starts out kneading very softly it is much easier to press between rocks and since it hardens so quickly, you don’t have to hold whatever rock or coral you’re trying to join for that long.

While the kneading activation process is very quick, the best part is that the silicone based putty actually cures into a very hard state but it doesn’t shrink. If you’ve written off old school epoxy putty due to the shrinkage and cracking when it is totally cured, you would be amazed to see how the Maxspect Coral Putty sets in, making a very tight bond with whatever it touches.

We wrote off 2-part epoxy putties years ago but the Maxspect silicone-base version is a completely different animal. We really didn’t believe this putty would work as well as it does but now that we’ve seen what it can do, we’ll always be keeping some of it around for aquascaping, quick fixes, and attaching larger corals and colonies. [Maxspect]