We’ve been window shopping the supply of corals for sale online for the past few weeks just to take stock of what most vendors are selling and we’ve come away with a couple thoughts. First of all, we understand the challenging logistics that are forcing the corals prices to never before seen heights, but secondly we don’t think coral buyers or vendors know what a ‘RARE’ coral actually is.

So many of these vendors label almost every single coral as rare, ultra rare, mega ultra rare, but they’re not really making a strong case when each vendor has a dozen of the same coral listed as rare. There is a huge difference between corals that in such supply relative to the demand, such as many Acanthophyllia and high end Scolies, and corals that are legitimately, objectively rare both in the wild and in the aquarium hobby. 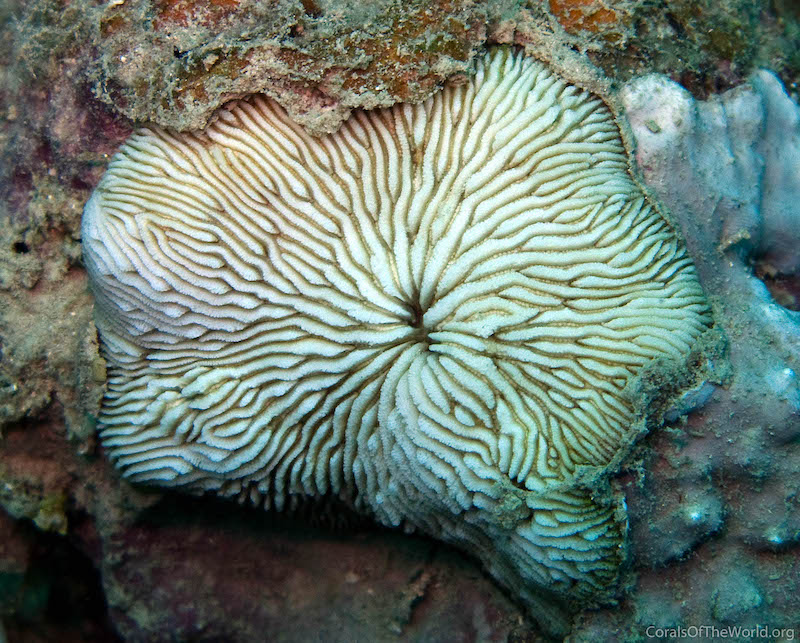 One coral that is always at the top of our rarest corals list is Cantharellus, a genus of Fungiid corals that are usually encrusting like a Lithophyllon but much more massive. Cantharellus is sometimes found free living as a single dense, round corallite but the few times we’ve come across them while diving they’ve been just barely colonial with a large central corallite and only a few, smaller corallites around the edge.

All the Cantharellus we’ve encountered in the wild were a dull shade of grey, maybe with a hint of imaginary green, interesting to see and photograph but certainly nothing to write home about. However when we infrequently see these in the aquarium market they have usually been either a small hitchhiker on the side of a coral base or mushroom rock, but when they are collected on purpose it’s usually a very nice shade of neon orange, much like we come to expect in the related Cycloseris disc corals.

We have legit only seen orange Cantharellus colonies in the aquarium world no more than 10 times in the aquarium market, and half of those experiences were at major exporters in Fiji or Indonesia! When we have seen these for sale they were always mislabelled as Lithophyllon, close enough in our book, but it’s been so long that we haven’t featured the unique Cantharellus coral genus since 2015.

Finally after weeks of searching for something different we were finally rewarded with an ‘orange Lithophyllon‘ listed for sale on Corals.com and couldn’t go through the online checkout fast enough. Interestingly this coral was described as originating from Australia so it will make a great and wonderful addition to the Scolymia Party Australian reef wall display which is the kind of dim light, cool temperature, & calm flow that we usually find these corals in.

Unfortunately, in contrast to the fast growing Lithophyllon and Cycloseris corals in the aquarium world, the cryptic nature and dense, heavy skeleton of Cantharellus would all but exclude its potential to be grown out and propagated as we would like. Nevertheless, some corals are more for enjoying than for sharing and we’ll do our best to give this rare Fungiid coral the best care we know how so we can continue to flesh out the Australian reef wall display.

We Got a Lot Off Our Chest with ReefBum [Video]

Is a 'Pest Free Guarantee' Too Much to Ask for in Corals & Frags?