The Neo-therm Pro is Cobalt Aquatics’ successor to their very exotic Neotherm aquarium heater design which first hit the American scene over nine years ago. We have to use that geographic qualifier because many of Cobalt’s electrical devices are Americanized versions of AquaEL products with the Neo-therm Pro being the Fahrenheit to the AquaEL Ultra Heater‘s Celsius.

The general appearance of he Neo-Therm Pro is virtually indistinguishable from its predecessor being all black, slim profile, with a thermoplastic enclosure which couldn’t be further from the typical glass cylinders or titanium heating elements of contemporary aquarium heaters. What has remained and appears to be somewhat visually improved is the status indicator LEDs which are used to navigate the temperature setting of the Neo-Therm Pro as well as to communicate the aquarium water temperature. 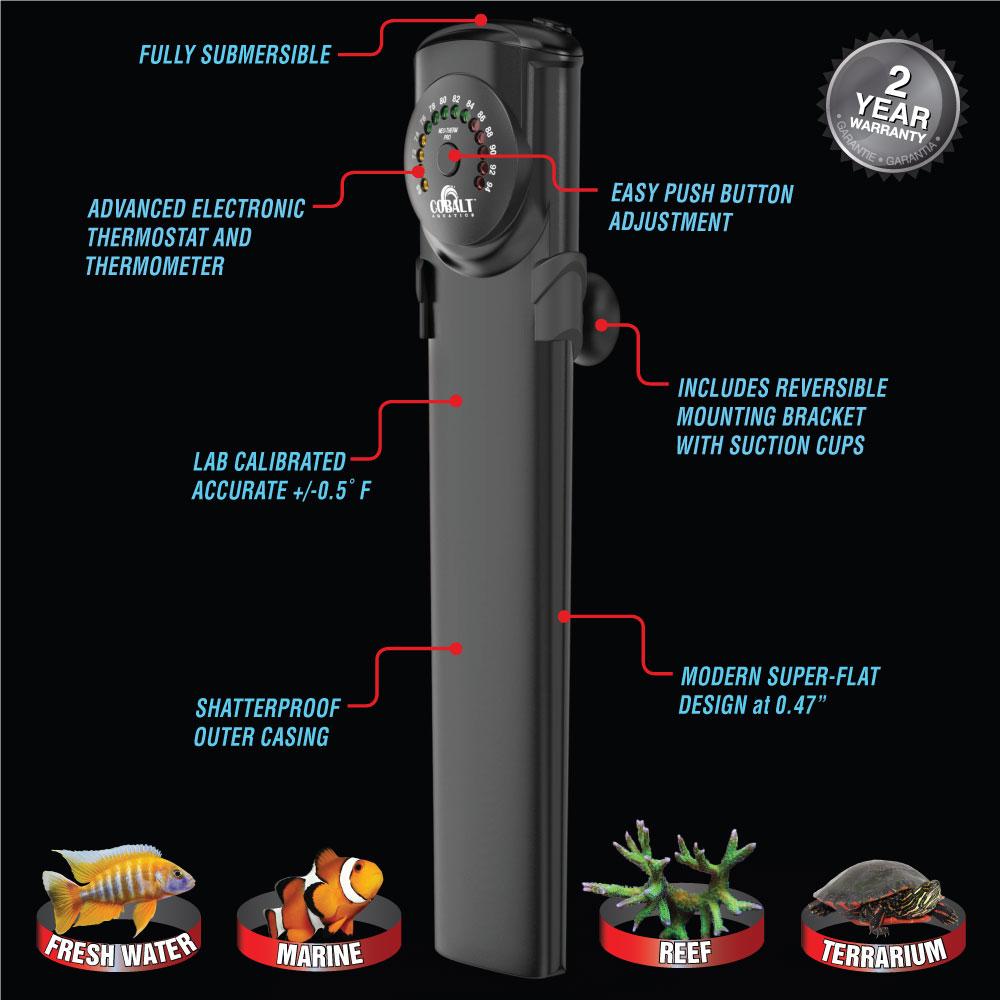 The most obvious physical difference between the old Neo-Therm and the new Pro version is the placement of the programming button which has moved from the topside edge to the central ‘dial’ ringed in LEDs – the previous placement was arguably much more reachable and ergonomic but we have to believe there were some good reasons why the change was made. While the cosmetics of the Neo-Therm Pro haven’t fundamentally changed, the marketing material appears to communicate that the biggest changes are under the hood with much improved electronics and optimized programming to help keep the Neo-Therm Pro warming the aquarium water to within 0.5°F.

The ambitious design of the non-glass and non-metal Neo-Therm heater wooed many fans to the form factor, the approach wasn’t without its drawbacks, but hopefully the new ‘Pro’ generation of Cobalt Aquatics’ Neo-Therm heater will improve the thermoplastic heater and address some of the previous issues. The cost of the new Neo-Therm Pro has increased from a list price of $73 to $90 for the 25 watt model and goes up from there but the street price is usually significantly less. We don’t see any mention of the dual element 300 and 400 watt models of the Neo-Therm Pro but we hope to try out the new Neo-Therm Pro when they become available later his year. [Cobalt Aquatics]