Keeping reef aquariums can be a very technical hobby and while there’s a boundless amount of information shared online, it can be very challenging to parse through it all for advice that’s really relevant, and information which might be tenuous or only applies to fringe cases. It’s for this very reason that we personally have a five-shelf library of aquarium references including The Coral Reef Aquarium by Tony Vargas which is right around the corner from being joined by a second volume. 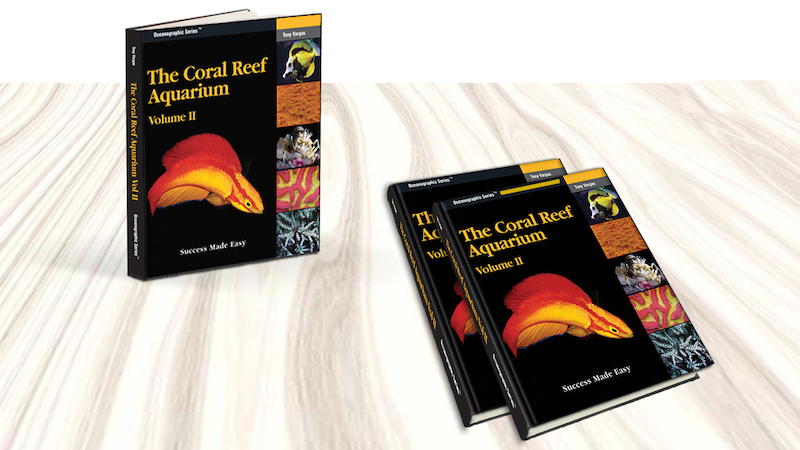 Believe it or not it’s been more than ten years since the first volume of The Coral Reef Aquarium was released and as you know, a lot has changed, evolved and progressed in the reef aquarium hobby. With the second volume of The Coral Reef Aquarium author Tony Vargas continues with this successful recipe of featuring thriving reef tanks from around the world as well as some chapters highlighting much of what is new or has changed in the world of reef keeping since the first volume was published.

The Coral Reef Aquarium was one of the best reefing books published last decade and it quickly sold out of its printing run so if you want to make sure you don’t miss out on volume 2, here’s your chance to pre-order the book before it’s even available to buy. The first copies of The Coral Reef Aquarium Vol. II will be the ‘gold edition’ limited to 150 copies for $79.95 after which point the street copies will retail for $49.95 hopefully dropping in the summer.

We know how tempting it can be to think that ‘all information’ is available online but it can be daunting to discern the usefulness of that information so a quality reference like Mr. Vargas’s new book can be a helpful guide to fall back on. Looked at another way, The Coral Reef Aquarium Vol. II is around the same price or less than a fancy coral frag and while you may not be able to frag it out into more pieces, it has proven itself to be a worthy investment with aquarium book collectors. [TLF]

Red Sea ReefMat: 10 Things we Already Love About It