The Rarest Color of ‘Tongue Coral’ We’ve Ever Seen

The mushroom corals of the Fungiidae family are some of the most unique and distinctive corals in the world. Ranging from tiny circular solitary Cycloseris to the largest free living colonies the mushroom corals are wildly popular species in the reef aquarium hobby for their ostentatious colors that we’ve celebrated many times here on Reef Builders.

While most disc or mushroom corals are usually lumped into ‘Fungia’ the group also include several species which are commonly called tongue corals due to their elongated shape, but these are not all the same. The most common ‘tongue coral’ include the perfectly elongated Herpolitha which can be found in bright green or orange colors while the less often seen ‘slipper’ corals of the Polyphyllia genus are also elongated, very fuzzy with tentacles but mostly grey to a light jade green.

However there is one other common species, Lobactis scutaria which has an oval shape that occasionally appears elongated enough to be called a tongue coral. Distinct enough from all other mushroom corals enough to warrant placement into their own genus, Lobactis is a very common fungiid across the Pacific Ocean and especially Hawaii where it often appears light pink to purple with contrasting green tentacles.

The purple and green colors are almost characteristic of Lobactis scutaria so we’ve been incredibly surprised to discover this species in an all orange coloration several years ago. While we haven’t seen more than a handful of examples of orange Lobactis since 2015 we just happened to come across a photo of a fresh specimen at De Jong Marinelife which appears to be orange with green tentacles! 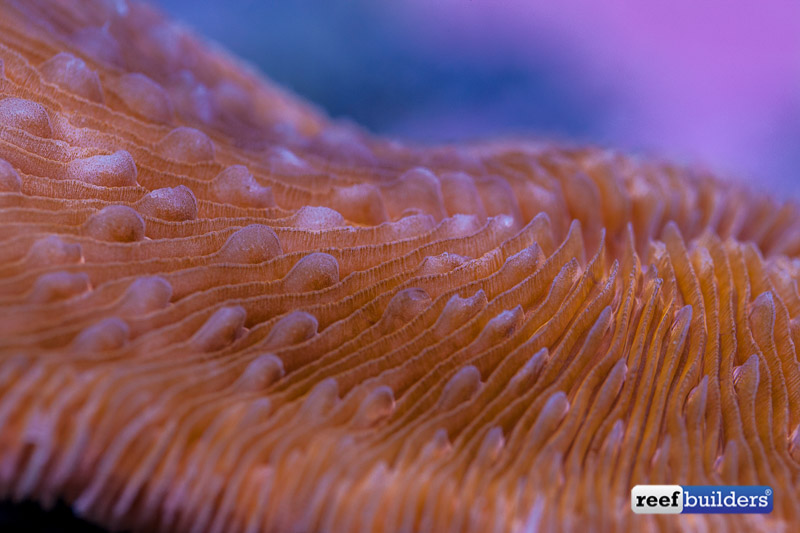 There’s no doubt that this coral is a Lobactis with its raised septal bumps of the skeleton below each tentacle of soft tissue but this example does exhibit a more elongated shape atypical for this species. It’s hard to tell from the photograph how vivid the orange truly is as it’s got some intermediate to the more usual purple base pigment but either way, we love to see these ‘lobed’ tongue corals in the reef aquarium hobby and hope to see more of the orange form with green tentacles in the future.