The Double Bright LED aquarium light from Marineland is starting to arrive at retailers nationwide and when you see the striplight at your LFS,  you will give it a second take even if you are not in the market for a general lighting LED light. We first got a good look at the Double Bright LED striplight in September and even then it was clear that the light was not a casual effort from the veteran aquarium product manufacturer. Even more exciting than the potential for the Double Bright LED striplight to be a great family of LED products now and in the future is the fact that this product is one of the first real LED lighting products by a very large aquarium company. The DB LED is a huge sign that LED lighting technology is maturing to the point of mass consumption. Although most of you will be reading this blog everyday because you have some kind of photosynthetic reef aquarium with high energy lighting, there is still a need for efficient, long lasting general lighting for the fish only tanks, quarantine tanks, nonphotosyntetic tanks etc. Even if you may not need one of these lights right now there is a strong chance you will consider a Double Bright LED or something like it  in the near future. Follow the break for a complete review and hands on look at this exciting new aquarium light.

Marineland’s Double Bright LED striplight is a great balance of price, performance, efficiency and especially looks. You will start forming a relationship with the DB LED before you even take it out of the box. The very clear and catchy packaging also happens to be very informative and the cutaway that allows the buyer to actually see the fixture is a very creative move.

the cutaway in the box also allows you to see how thin and sleek the light is, starting the buyer thinking at how great this light would look over their tank.

See that spectral plot on the back of the box which tapers off pretty sharply in the red spectrum? Well wesee that too in our own fish tank where an Orange Clarion Angelfish appears orange under two vibrant normal output tubes now it appears much more yellow in appearance. However, there’s a lot more yellow in reef fish than orange and that color is definitely more noticeable in the rolandi damsels, multicolor angelfish, pavo damselfish and red sea pearlscale butterflyfish.

The LEDs are well spread which reduces some of the coverage in the tank but it also helps to encourage shimmering if your aquarium has good agitation of the water surface.

The 18-24″ striplight has 6 white LEDs and three moonlight bulbs.

The Double Bright LEDs come in 18, 24 and 36″ lengths but with extender feet/bracket that are less flexible than you would think. This 36″ light neatly stretches out to light up this 48″ fish aquarium.

The profile of the Double Bright LED almost disappears on the aquarium, a very neat and welcome aesthetic trick.

At a distance of ~3″ you can clearly see the effect of the focusing lenses of the white LEDs which help the light penetrate a little deeper in the aquarium. 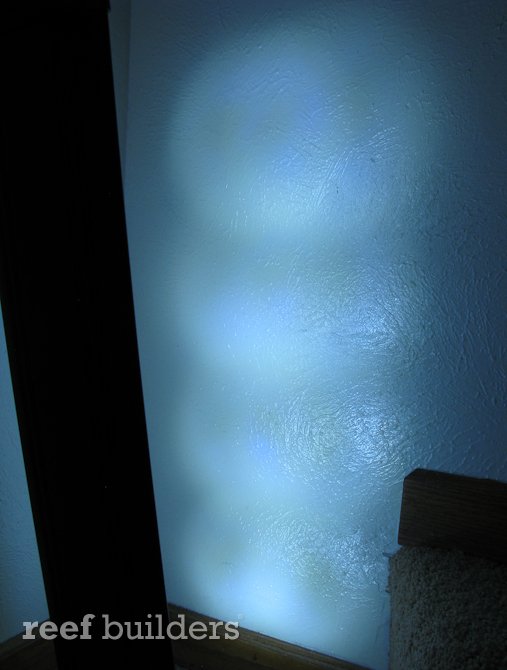 At ~6″ the white LED light starts to blend rather well.

Uber close up of the weak blue LED moonlight, with a minimum exposure setting on the camera.

The Double Bright LED sits as pretty as a Tiara on top of the aquarium. The lower power consumption is a huge advantage to this light as is the likely lifetime of at least five  years.  Even while using just two four foot normal output fluorescent lamps so the fish tank light was using 80 watts alone. The 36″ DB LED strip covers enough of the tank and although the 18 white LEDs are rated at 1 watt each, the fixture consumes 24 watts. Still, the reduction of more than 2/3 is a very welcome efficiency boost. Granted the tank is not quite as bright as before but this will also lead to less algae in the tank. We like, like, like the Double Bright LED from Marineland but we also have a couple of criticisms. For a fish only tank no light is required but it’s still nice to see our fish in popping vibrance and intensity. on a 12-15″ deep tank a single BD LED is likely to be plenty bright for good fish watching but above 18″ and you are likely to start missing some of the brightness. Also, it is maddeningly frustrating to see very very dim blue LEDs as moonlights. The six blue LEDs on the 36″ DB LED are not even as bright as a single high powered 1 watt LED and we couldn’t even register a power reading on the trusty Kill-a-watt. The so-called moonlights are not even bright enough for twilight viewing; when the whites are off the fish immediately go to sleep instead of lounging about for our viewing pleasure. Marineland would it have killed you to make these just a little bit brighter? The overall color rendition of the DB LED would have been that much better for it but perhaps this feature is starting to tread close to the O-tec patent. All minor quibbles aside, designing a whole new lighting line for mass production is not easy and we give Marineland a lot of credit for an excellent first product. We’d love to hear from those of you who are using this lamp so throw in your 0.02 in the comments and let us know how the Double Bright LED is working for you.

Bioluminescent plankton: aglow in the ocean