Hands-on with the Mame Nano Overflow, the Lily Pipe of reef aquariums

The Mame Nano Overflow is one of the most luscious piece of hardware ever built or conceived for the marine aquarium. That may sound hyperbolic but we make no claim to hide our fanfare for this very creative Mame Design firm. Although overflow boxes were the norm for tens of years on reefs tanks, it’s a surprise why it took so long for someone to create this extremely innovative overflowing device for use on home aquariums. Perhaps it’s because of the nano reefing scene, or the ubiquity of glassware for the freshwater aquarium which spurred on Mame Design into producing the Mame Nano Overflow. Either way, the freshwater planted aquarium hobby has it’s Aqua Design Amano Lily pipes and now both the fresh and saltwater hobbies have the Mame Nano Overflow. Although we kind of winced when we saw all those tubes going every which way on this device, the simple pictorial walk around of the Mame Nano Overflow is featured after the break for you to get yourself acquainted with this glass plumbing device.

In case you didnt see our previous post on the Mame Nano Overflow, we’ll go over the major details just to get you up to speed. The Mame Nano Overflow is a plumbing device which approximates the path that water would take in an overflow box, and condenses that into handblow glass design. There are three “joints” which are held together with vinyl tubing so it is possible to get a few degrees of freedom in assembling this device, and to access most parts of it for servicing and cleanup. The Mame Nano Overflow is not just an overflow device as it also incorporates the return line with a twist. The return line has a built in venturi which both keeps the siphon free of bubbles for trouble free operation and, it also can recover the siphon of the overflow should it break during a power outage or what not. There is a silencing cap which fits on the opening of the drain side and another cap which goes on the included and adjustable intake strainer (which we lost track of on the return trip from InterZoo).

The retail price of the Mame Nano Overflow is 12,980JPY or about $141 at the current exchange rate. The price is not one for mass consumption but neither is the hand made process which creates it. The Mame Nano Overflow is indeed a boutique product but we can’t think of a more stylish way to overflow a nice trimless tank of a medium size nano reef than to run one of these to the sump. I know many of you are already hating on having to clean this device on a regular basis but with well focused LED lighting, it would be a cinch to reduce and manage the amount of biofouling that might take place inside the glass tubes. Huge thanks to Ken-san of Mame Design for gifting us this Mame Nano Overflow so that we can share it with the Reef Buidlers readership. A few distributors have expressed interest in importing this and other Mame products but so far no one has stepped up. As far as we’re concerned, we can think of dozens of dedicated nano reefers who would love to employ this beautiful and useful device and for them the availability of the Mame Nano Overflow in the US can’t come soon enough. 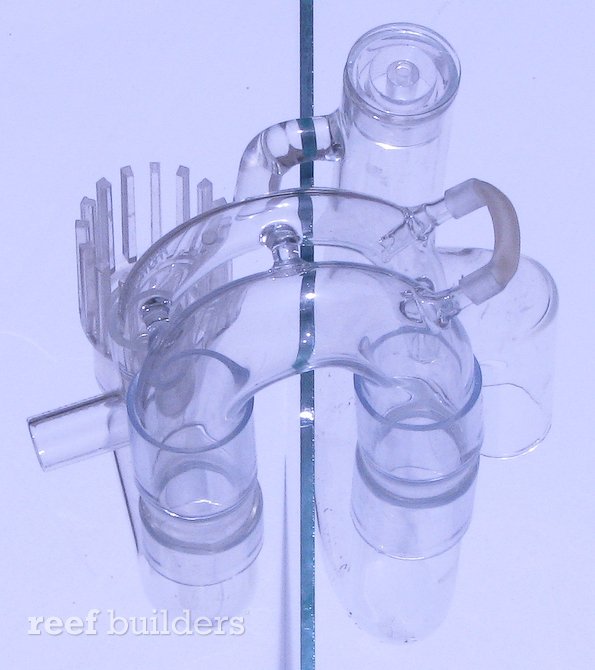