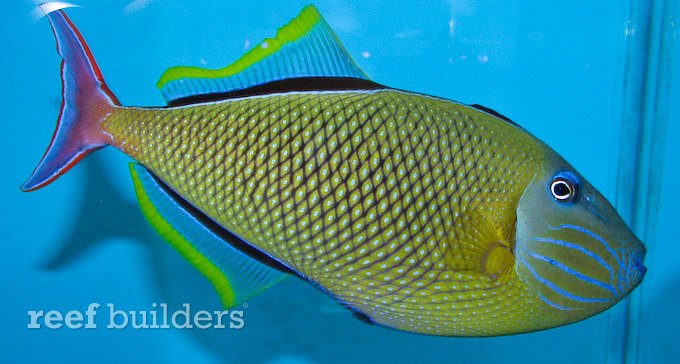 This just in from Reef Culture Technologies –  “At this time we are proud to announce the first ever captive rearing of the Cherub angelfish, Centropyge argi, and the Crosshatch triggerfish, Xanthichthys mento. These species were raised as part of our research and will not be available through RCT Direct (this website).”

So while we take that to mean there are no plans to see baby captive bred Crosshatch Triggerfish from RCT, we think it’s fair to say that with the amount of hobbyist spawns that were reported, and the success of Dr. Andy Rhyne breeding the Queen Triggerfish in 2009,  Xanthichthys triggerfish were one of the highly probable groups to be responsive to the efforts to captive breeders.  So it’s almost not surprising that RCT pulled this off.  We  said *almost*.  Bravo and a hearty congratulations.

Some interesting details were included on the work with the Crosshatch Triggerifsh:

“We decided to breed the crosshatch triggerfish (Xanthichthys mento) because of its popularity in the aquarium trade, its high and dependable embryo production and its primitive and challenging-to-raise larvae.  The species spawns approximately every 19-23 days in captivity. It scatters up to a million eggs on the tank bottom substrate. The embryos [eggs we presume] are 0.48 mm in diameter and the first feeding larvae are 2.1 mm TL. The larval stage is very long, exceeding 100 days.”

Additionally, RCT revealed insights into the entire process of finding successful first foods – a daunting task.  “After more than 20 larval trials using angelfish larvae as a control and wrasse and triggerfish larvae as the test animal a breakthrough was made with an isolated ciliated protozoan oligotrich. The organism was used for 10 days to bridge the critical food size gap and allow the larvae to feed on copepod nauplii. A write-up involving this research is planned.”

We applaud RCT for their forthrightness and open sharing of their methodologies, and look forward to the planned future writeup!  It goes without saying that pioneering efforts like this deserve consumer report…so the next time you have a choice between a wild caught fish from who-knows-where, or the same thing as captive bred from RCT, we encourage you to think about the vote you’re going to cast with your wallet.