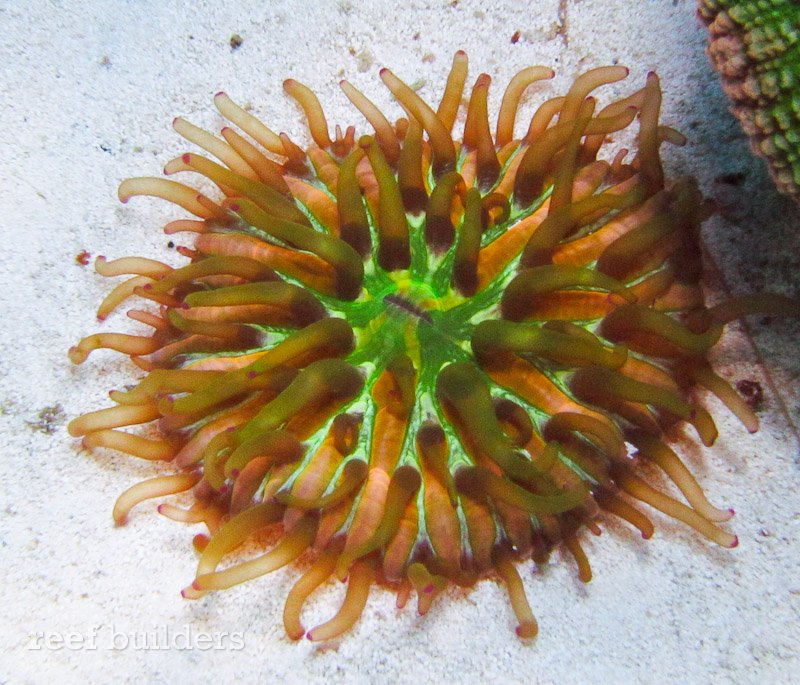 Fungia fralinae is a fairly common, popular and robust species of disc coral which is more often an attractive green color with orange mouths. It is actually less common to get Fungia fralinae as an individual polyp than as the remnants of an old colony which has died and been reborn with small polyp ‘anthoblasts’ which have regenerated from the skeleton, in most cases giving rise to dozens of identical individual little Fungias. Wouldn’t it be great if the coral above followed that script?

So how lucky are we, the collective we, that the incredible orange striped-green Fungia fralinae above is not only breathtaking, but it came from one of these Fungia-trees crowded by identical corallite anthoblasts. The coral pictured above is the first orange striped Fungia fralinae to have taken the plunge from its parent Fungia tree and also the first to be able to expand its polyp and tentacles. You can clearly see the pink tentacle tips which corroborates all of the other indicators that this indeed a Fungia fralinae.

This particular corallite is barely topping one inch in diameter, can you imagine what it will look like when it grows to a full size of well over six inches in diameter? Not to mention, Fungia fralinae can be induced to die a partial death to produce numerous, countless anthoblasts. Is the reef hobby ready for the first captive bred strain of disc coral? You bet it is!