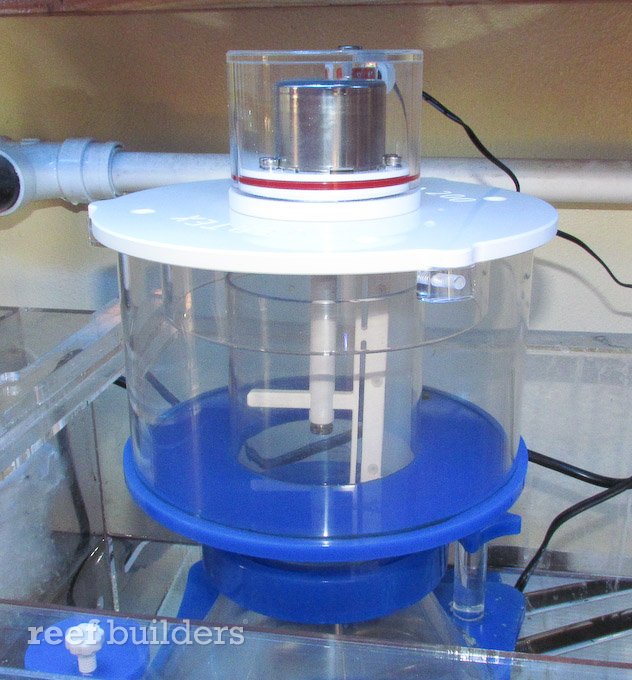 The Vertex Vectra protein skimmer neck cleaner is a product we were keen to try out, especially in conjunction with a protein skimmer from a different manufacturer, in this case Warner Marine. Whereas some Vertex products carry a top shelf price tag like some of the Royal Exclusiv products with which it is affiliated, the Vectra engine delivers an appropriate amount of performance at a price that makes it a good value. How good of a value depends on whether or not you see a benefit to using an automatic protein skimmer neck cleaner to increase skimmate production, and we think it does. 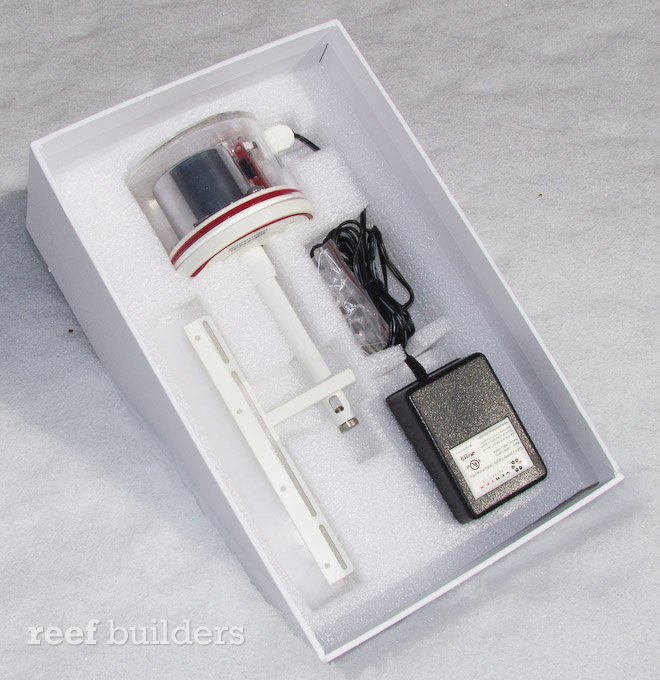 As with the Vertex Simplex and Duplex algae cleaning magnets, the Vertex Vectra comes beautifully packaged, a plus for retailers who like products that sell themselves and we wouldn’t doubt it if we were told that the Vectra was packaged at Foxconn right alongside the hottest consumer electronics.

Like the Avast Marine Swabbie, the Vertex Vectra engine is designed to be paired up with a specially made lid to accommodate the spindle that travels from the motor to the wiper blade. Whereas the Swabbie motor comes pre-attached to the lid, the Vertex Vectra is purchased separate and it can be paired up with a range of lids, offering a little bit more flexibility for swapping out with different sizes.

We’ve been using the Warner Marine MF201 semi cone protein skimmer for about six months now on a reasonably stocked fish aquarium, during which time the MF201 has produced a predictable amount of skimmate. Having familiarity with this skimmer’s performance is what made us keen to test out the Vectra, not only as a product but also as a function for the protein skimmer.

Installation of the Vectra on the stock lid for the Warner Marine skimmer was super easy, and the 200mm lid fit so tightly that it literally snaps into place onto the skimmer cup without needing to use the titanium screws to fasten down the lid. Adjusting the wiper blade to the conical neck took a couple of tries, but once set it pressed firmly and completely against the surface of the collection neck.

Replacing the skimmer cup onto the protein skimmer with the added height of the Vectra engine mounted to the lid and the wiper blade protruding below was a little tricky. It’s not too big of a deal considering now the neck will need much less frequent cleaning but it could be an issue for aquarists who rely on meager bayonet fittings to allow them to get away with an inch of clearance or less for servicing the protein skimmer cup.

Once the Vectra is all situated on the protein skimmer neck, lid and body, all you need to do now is supply power to watch the Vectra engine make the wiper blade go round and round. The first surprising thing about watching the blade do its thing is that the skimmer foam doesn’t fall back in to the skimmer at all, it just gets pushed around for a while until the motor stops, and then it is picked up again by the wet foam which barely collapses, if at all.

We’ve been manually powering the Vectra once a day to watch it wipe, and the subsequent reaction by the skimmer. Seems like it would suffice plenty to have a wiper blade clean a skimmer neck once a day for a couple minutes. This is where it would have been nice to see a built in timer/controller to provide a simple adjustment of wiping frequency, because using a separate timer is bulky and clumsy.

After using the Vertex Vectra on the Warner Marine MF201 and carefully scrutinizing skimmate and output for about a month, we feel some level of confidence that the automatic cleaning of the neck is responsible for some increased performance. It’s pretty clear that a clean protein skimmer neck offers much less resistance to rising skimmate so having a cleaner neck would result in increased skimmate output.

If you have a reef aquarium system with a protein skimmer and lots of other forms of nutrient export, it’s probably not worth it to have a neck cleaner for your skimmer. However, if you have an aquarium or reef system that depends on a large protein skimmer to maintain water quality, $200 worth of automatic neck cleaner is well worth the extra investment to keep your $600+ protein skimmer at peak of foam fractionation. So far the Vertex Vectra is doing a swell job of keeping the skimmer on the fish tank cranking, which is a good thing because we have a lot of other skimmers to clean. 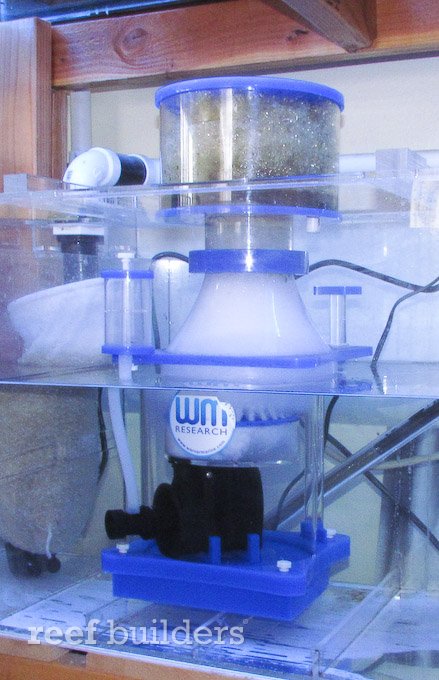 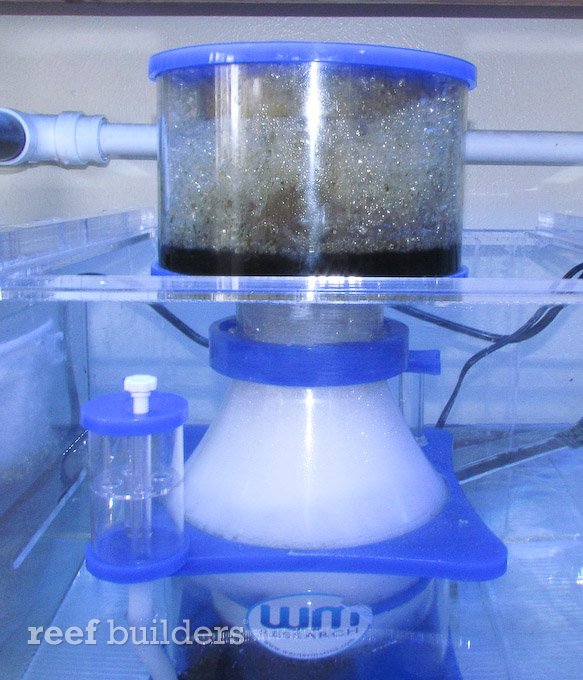 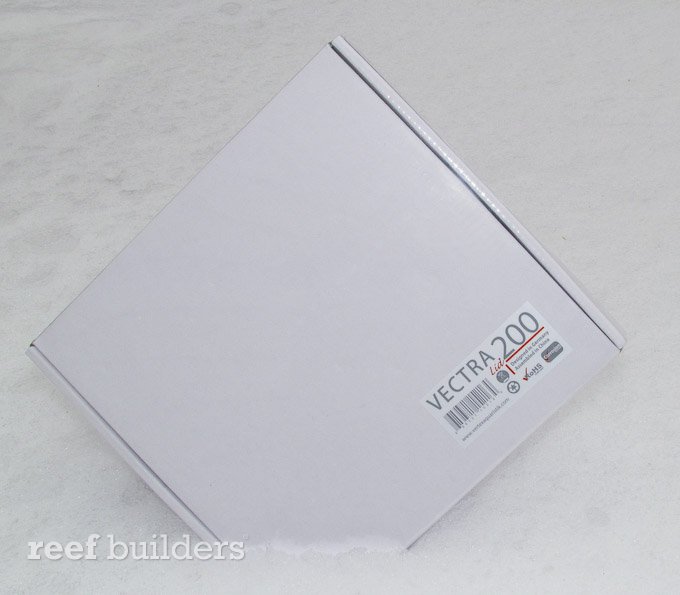 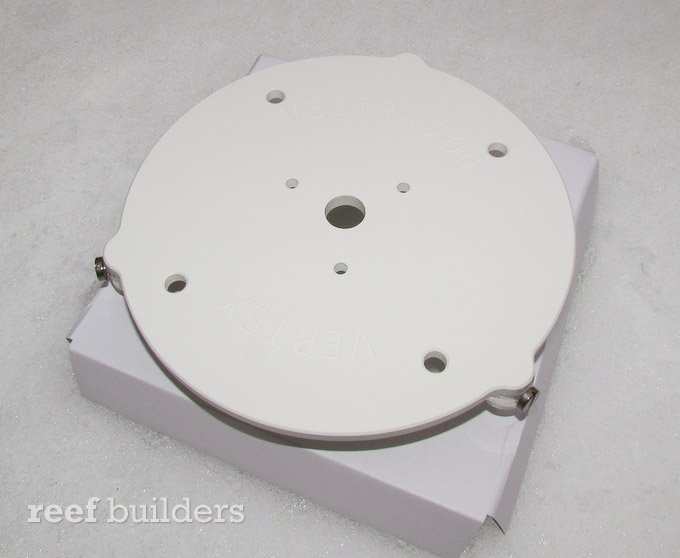 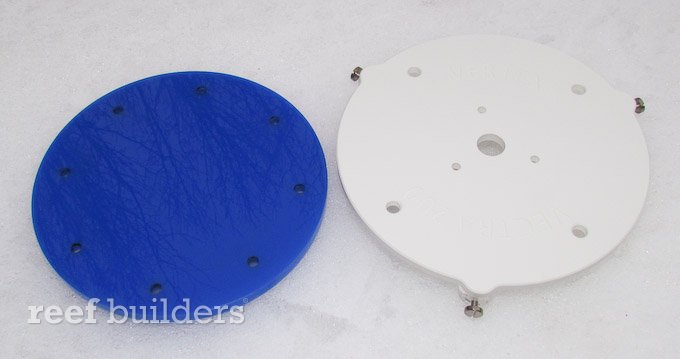 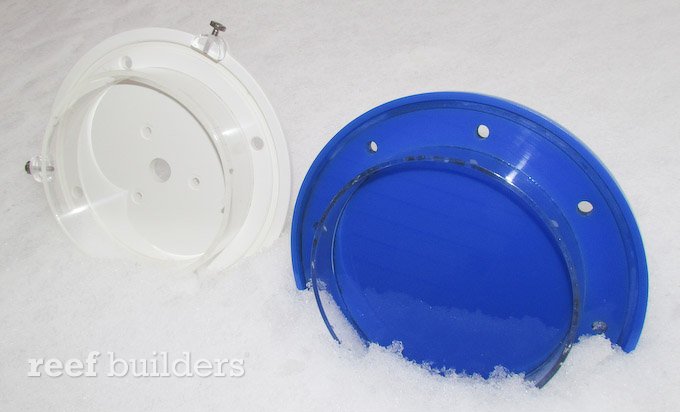 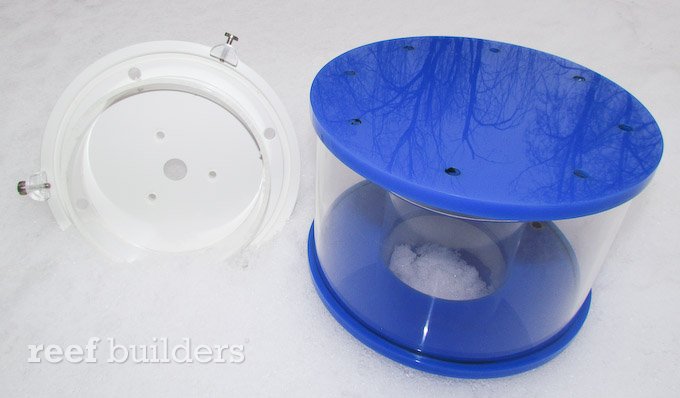 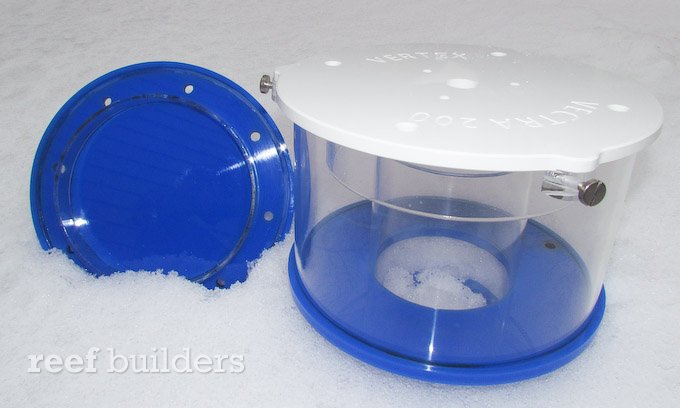 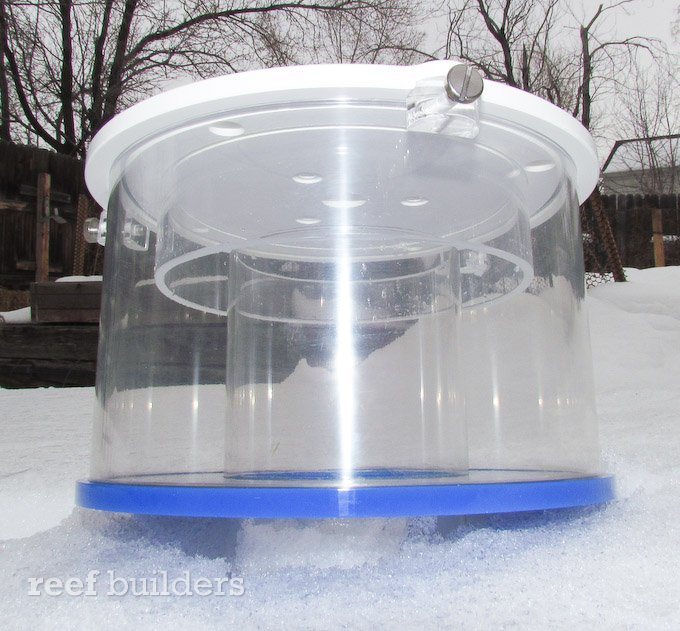 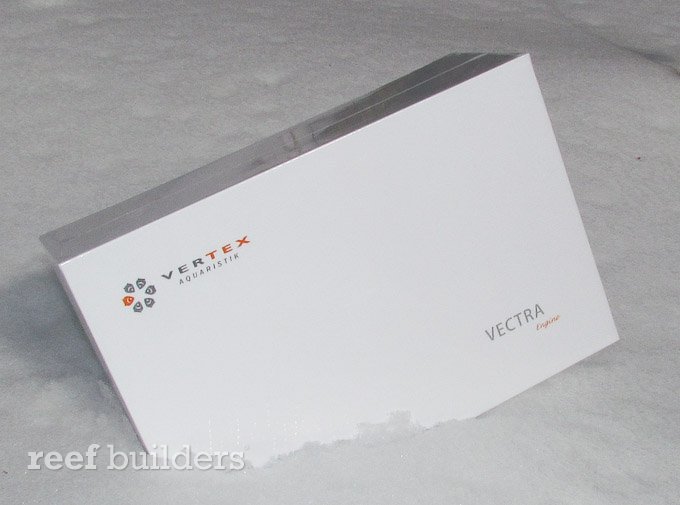 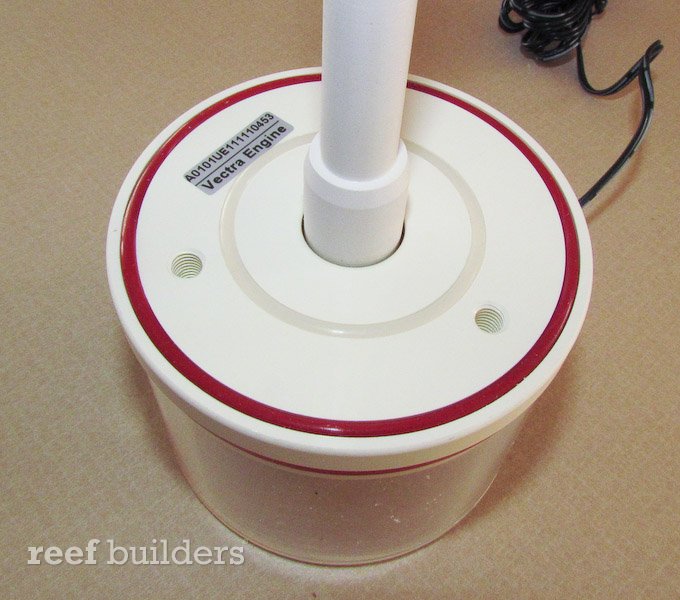 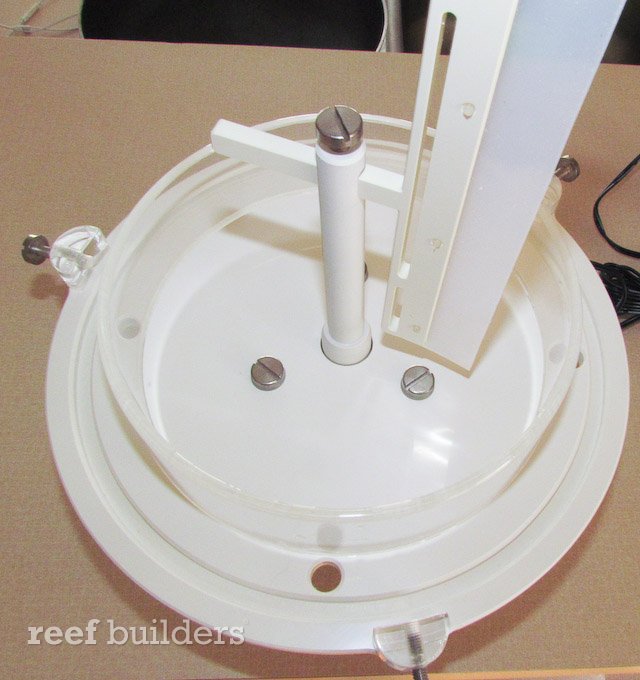 Stellar, simple soft coral and LPS tank is a masterpiece of father and son collaboration