Waveline DC 5,000 and RLSS Skimmer reviewed: Even better when they’re together

Normally when I agree to do a product review, I proceed with a new additive or device very cautiously, running or testing products for just long enough to get a feel for how it performs over a medium amount of time, like dipping toes into a pool to test the water temperature. Not so with the RLSS Waveline DC-5000 water pump and RLSS R10-U cone protein skimmers. Since adding a 33 gallon long frag tank to my 60 gallon reef display, I have been looking for a couple products to supersede the SWC Cone 160 and Tunze Silence controllable which have been keeping this tank in top shape for about two years.

As soon as I learned of the controllable Waveline DC 5000 pump and its Waveline powered RLSS protein skimmer, I knew that these were products which I felt comfortable using as important components for a performance-critical application like a high energy stony coral growing aquarium and gyre frag tank. As it turns out, I made the right choice by going all in with the RLSS skimmer and Waveline pumps.

The Waveline DC-5000 is a DC water pump that pushes up to 1,320 GPH (5,000 LPH) that is adjustable to six different speeds controlling the RPMs of the pump at a pretty efficient clip, sipping only 40W at the maximum speed. Although the Waveline DC-5000 pump may consume 40 watts of DC power, together with the adapter the power draw at the socket is actually about 50 watts. 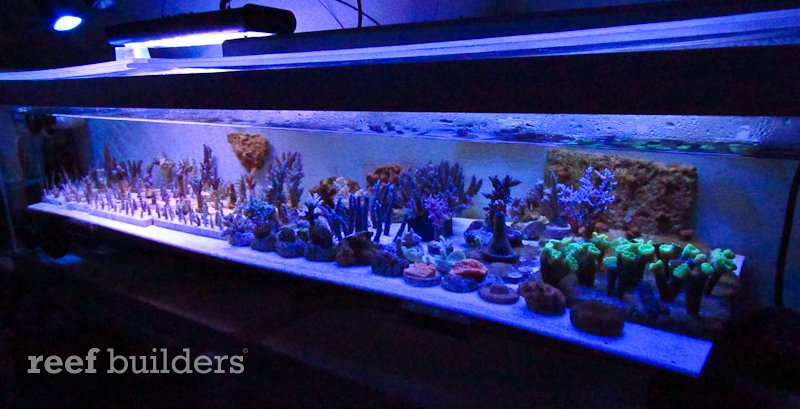 The R10-U RLSS Skimmer features a conical reaction chamber, a wide riser tube and fine adjustments of water level using a wedge pipe in the smaller model. The heart of the RLSS Skimmer is the Waveline DC-5000, adjustable from 0-100% power and with a feed mode that pauses the pump for 10 minutes; a perfect interval for feeding your reef fish and corals or for cleaning the skimmer neck and cup. An added bonus of the Waveline DC-5000 is that it has a soft start feature which gradually ramps the motor back up to speed to that you don’t experience a ton of splashing once the water starts flowing again. 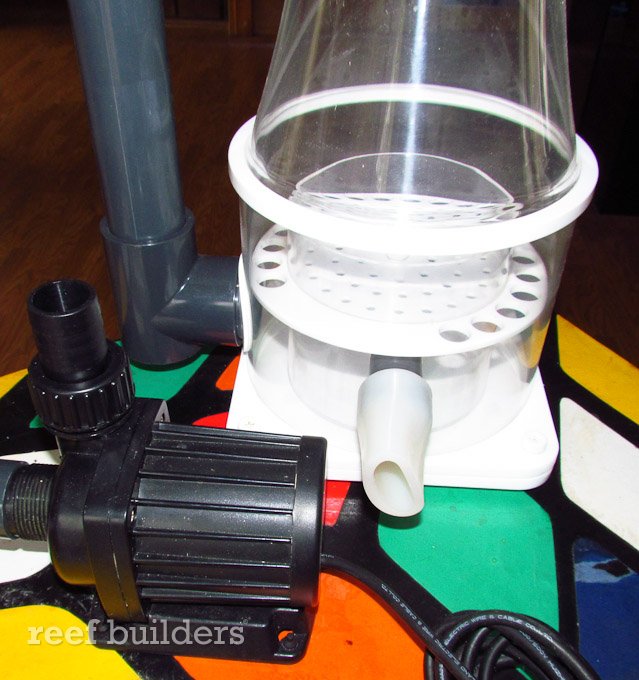 At first glance and in pictures, the RLSS Skimmer appears to use same the same basic design as a myriad of Chinese produced protein skimmers that are rehashing a common form. Once I got my hands on the RLSS SKimmer it was clear that it may have been forged from similar blueprints as the skimmers listed, but it was made to be a much more robust skimmer. If it wasn’t obvious by looking at the RLSS R10-U Skimmer in real life that it was made with thicker acrylic, the unexpected heft of the skimmer body made it clear that a lot more material went into its production than what we’ve come to expect. A little extra pressure or a minor drop could easily break the body of an econo-skimmer, but I can’t imagine any aquarium maintenance situation that could easily break the body of the RLSS Skimmer, you’d have to drop it from a second story or “accidentally” hit it directly with a hammer.

The Waveline DC-5000 water pump is also a breath of fresh air in its appearance and form factor. In the world of water pumps you have powerheads, and you have water pumps with powerheads being small enough to put inside an aquarium and real water pumps being large and powerful enough to drive a 100 gallon aquarium system. There is a gap in physical size and actual performance between powerheads and water pumps where they don’t really overlap, and this is where the Waveline DC-5000 fits in. Rated for 1,320 GPH, the Waveline pump is much stronger than a typical powerhead, yet it is just a tad smaller in size than your typical beefy submersible water pump like a large Sicce Synchra, Laguna, or Laguna-based ATB Flowstar or Red Dragon Mini. 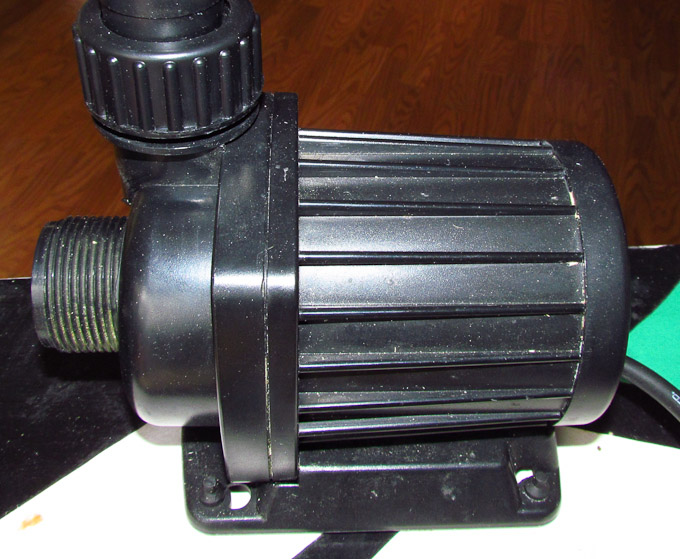 When I fisrt set up the 60 gallon aquarium, I was only using a 20 gallon high aquarium as a sump which was plenty enough to accomodate the gear for a sixty gallon system. Once the 33 gallon frag tank was added, the equipment kept up with the now 100 gallon system, but just barely. I had hoped to be able to just barely squeeze in both the Waveline DC-5000 and the Waveline DC-5000 powered R10-U RLSS skimmer, but that was not to be. A new sump which was 15 inches wide by 24 inches long was installed in order to accomodate both of the devices. Installing the in-sump R10-U skimmer was a breeze since all it needed was enough space for its moderate sized footprint and all other parts and connections were provided. Installing the Waveline DC-5000 was equally dead-simple since a myriad of barbed union fittings were also provided in many different sizes to easily find the one I wanted to use.

The RLSS Skimmer R10-U was placed in the sump with about eight inches of water, an optimal depth that isn’t too high and restrictive in terms of head pressure on the pump and not too low so that it can’t get in enough air, or start sucking air from the sump water surface. The Waveline DC-5000 was installed with a one inch Y-fitting to divert flow to the 60 gallon display and 33 gallon frag system, both of which have independent control of water input with separate 3/4″ ball valves. The identical external controllers for the Waveline DC-5000 pumps powering the return and the protein skimmer were installed on the stand, right next to each other where the output of each could be controlled and adjusted synergistically. 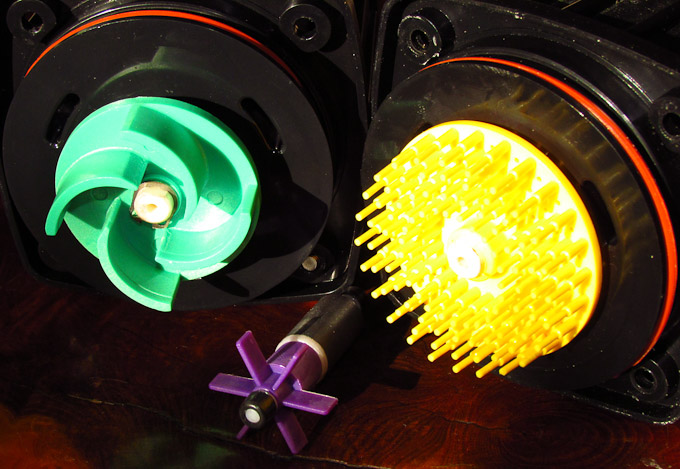 The Waveline DC-5000 pump and RLSS R10-U Skimmer using the same pump have been running flawlessly for two months on my 100 gallon coral aquarium system. Bumping up the performance of my skimmer and return pump has resulted in a cleaner aquarium, with much less growth of algae and biofilms, and an unprecedented amount of flexibility that affords me the ability to feed how I want and as frequently as my corals like.

As expected, the high RPMs of the needle wheel skimmer pump produce a super steady cloud of micro-fine air bubbles. When I work on the aquarium with my hands inside the display, the R10-U skimmer collapses its foam head for a brief time but it quickly gets back to fractionation in record time. The diffuser plate and conical skimmer body seem well proportioned to produce a very calm, low-turbulence environment inside the skimmer which results in the thick kind of skimmate production that most of us strive for, and the large cup easily captures a full load of funky gunk each and every week. 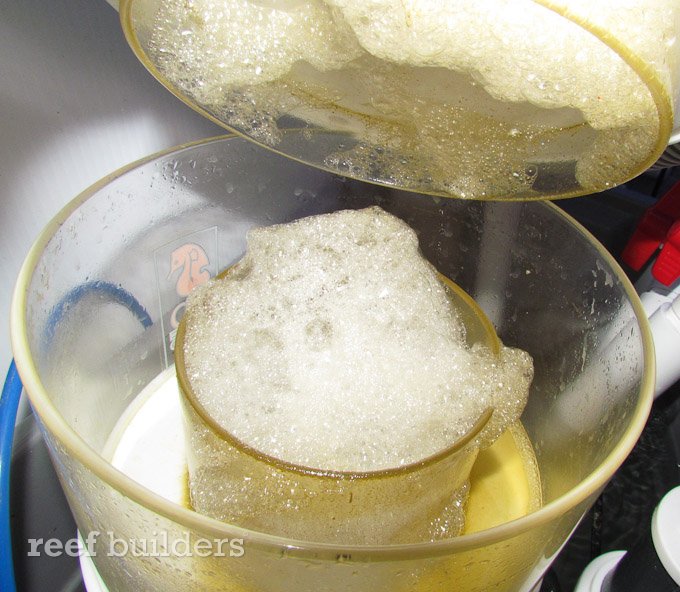 Of course it’s easy to install ball valves on the returns and adjust the water level and air intake of the skimmer but having discrete levels of performance from both at the touch of a button has been wonderful. For basic feeding of the fish and corals I press the feed button on the skimmer controller to cut it off for ten minutes. When I am target feeding corals or target dosing the frag tank I press the feed button on both the return pump and the skimmer and it’s all good. Other times I press turn down the power level of the skimmer and then press the feed button on both pumps when I want to feed a little heavily to the frag tank but I want some of that food to circulate through to the display as well, without the skimmer going crazy. The only additional thing I could hope for in the Waveline DC pump is some kind of external input control, either a 0-10v or a Mini-DIN connector to allow even more flexibility using a stand-alone aquarium controller.

Efficiency and feature set aside, one of the best parts of the Waveline pumps is how quiet both of them have been for me, even after being used and tested for several months. Almost any aquarium pump can start out whisper quiet but uneven wear and inferior design can lead to excess trapping of particles, calcium precipitation and other build up that leads to noisy pumps. The silencer and the needle-wheel equipped Waveline DC-5000 on the R10-U is equally quiet, which is super important since this coral aquarium system is located right next to my desk. It’ll be a long time still before it’s possible to say how well the bearings of the Waveline are wearing, but so far so good and even with the increased output of water flow, the Waveline DC-5000 is no louder than the Sicce Synchra 3.0 that it replaced.

Although I was given both products for review, the $199 pricepoint of the Waveline DC-5000 and $750 price-point of the RLSS R10-U Skimmer represent exactly the price, quality, performance and feature set which I feel comfortable investing in. The coral aquarium system on which I am using both of these devices may only be 100 gallons in volume, but this is a very high energy aquarium, loaded with tons of light, packed out with corals and not your average coral growing system.

I would feel very comfortable recommending the Waveline DC-5000 for powering aquariums up to 250 gallons, and the RLSS R10-U for moderately stocked aquarium volumes up to 400 gallons, give or take depending on your goals. I don’t exactly know where RLSS cor their products came from (it’s a rhetorical statement, they’re from Canada), but I have been thoroughly impressed using their skimmer and pump for one of my most coral packed aquariums. The Waveline DC pumps and RLSS skimmers have a great feature set – solid build, quiet reliable operation, easy installation and an intersection of price and performance which encroaches on the best top-shelf, German-made protein skimmers. [RLSS] 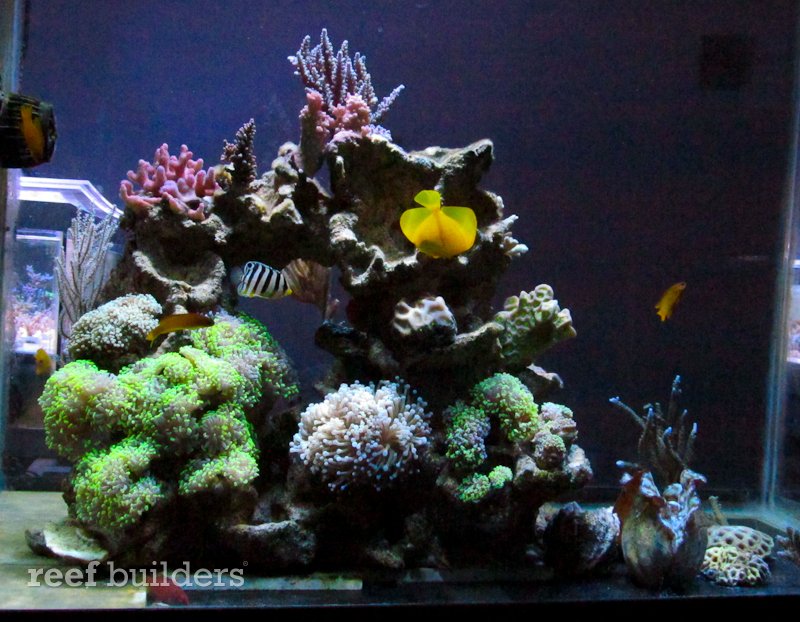 AquaDigitalLife is a computer-aided, all-in-one automation, maintenance and monitoring hub