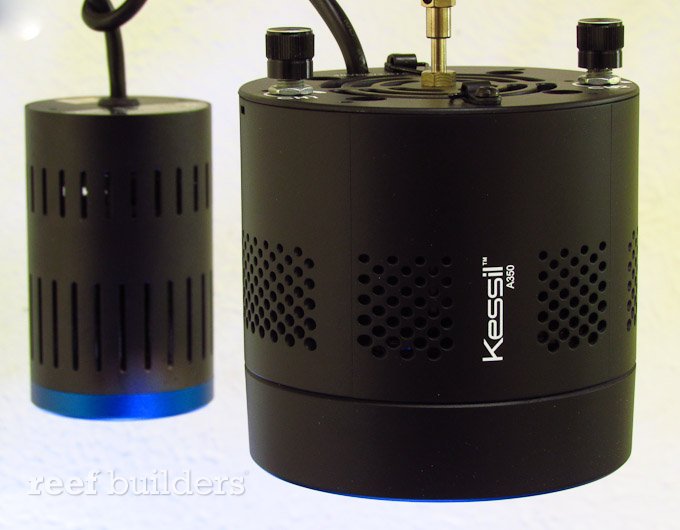 By almost any metric, the Kessil A350 and A350w are some of the best and most feature rich LED spotlights ever made for growing corals in aquariums. Following the widespread success of the Kessil A150w LED spotlights, the A350 and A350w take this aquarium LED spotlighting thing to the next level with a small and lightweight form factor, multiple LED colors, two channels of manual control, inaudible active cooling and an aggressive price point that undercuts anything else in its class. All these features are well and good on paper but the Kessil A350 gets a whole lot more credibility after doing a successful tour brightening one of our own tanks for most of this year. 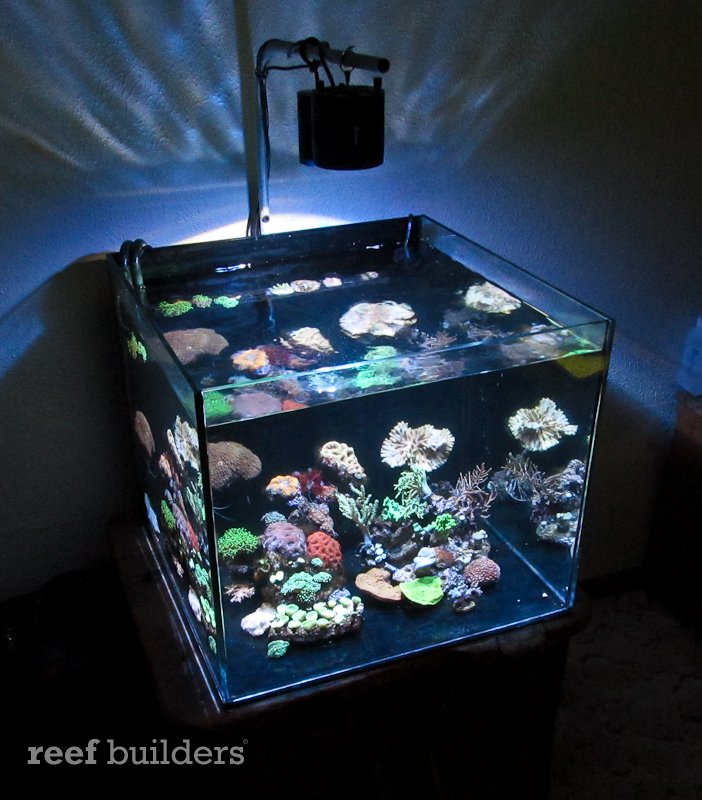 The Kessil Tuna Blue LED spotlight uses a dense matrix array of LEDs sitting pretty underneath a common primary lens. In the Kessil Tuna Blue A350w the lens alone is sufficient to produce a beam angle of about 140 degrees and in the A350 a secondary optic in the form or a reflector reduces the spread to about 60 degrees. The Tuna Blue uses a vapor heatsink like the Kessil H350 to keep the size really small, only four inches in diameter and three inches tall in the A350w, 3.75 inches tall in the reflector-equipped A350.

Whereas the Kessil A150w comes in three colors, the Tuna Blue has all the colors built right in. The array of LEDs in the Kessil Tuna Blue is the same in both the A350 and A350w with a blend of different colors, split into manually controllable white and blue channels. Individual potentiometers on top of the Tuna Blue LED spotlight housing allow users to manually adjust brightness and to tune the level of blue the light is emitting, but at the moment there is no way to produce natural dawn/dusk cycles or even timer functions.

We’ve been using the Kessil A350 on a 24 inch cube for most of 2012 and so far it has turned out to be the best, smallest stand-alone LED light which we’ve yet used on an aquarium. Before we delve into how the light looks in the tank, we have to point out that the Kessil A350 really plays the part of the LED spotlight with a tiny presence that really lets the aquarium shine, pun intended. Whereas some of the super large LED spotlights use massive amount of passive heatsinking to keep LEDs cool, the tiny package of the Kessil A350 is very lightweight, making it very easy to hang and even to squeeze into existing lighting setups. 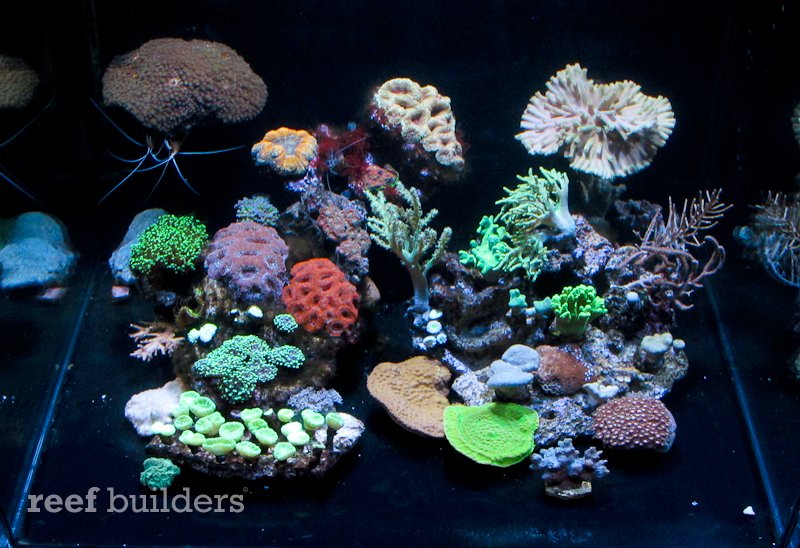 Although the Kessil A350 is 90 watts, it only has 42 LEDs running at a little over two watts each, so don’t think for a second that the A350 can hold a candle to a 100 watt multichip LED spotlight with one hundred, one watt LEDs. Even with the advanced performance of the dense matrix array, and the superior color mixing that comes with it. a discrete 100-watt multichip running at one-watt-per-LED is still more efficient at generating photons. That being said, you wouldn’t use a single color multichip LED spotlight on a reef tank but you can totally get by with just Kessil Tuna Blues for growing corals. Over the last six months the Kessil A350 has done an excellent job of growing and coloring a wide range of common aquarium corals including leathers, softies, zoanthids, acans, Euphyllia, disc corals and a range of different Turbinaria species.

That being said, we personally backed up the Kessil A350 with an A150w mostly to diminish the effects of hard shadows that comes from having a single point source, even though the Kessil A350 produces plenty of light in multiple colors for great looking corals. With our unit mounted 12 inches (25cm) above the water surface, we measured a maximum PAR of 325 mmol right below the water surface and 75 umols at the center of the glass. Better yet, a foot underwater the PAR was still bright and incredibly even at 125 umols in the center and 90 umols near the center of the tank walls. As an added bonus, if you are down with the stony corals the Tuna Blue delivers a small amount of UV light with about 1 w/m2 at the water surface and about a quarter of that throughout the tank at 12″ deep, 24 inches from the light.

Kessil’s A350 is more than capable of lighting up four square feet of coral growing real estate, and the LED spotlight form factor preserves top-down views that is great for LPS and frag tanks. At $399 the 90 watt Tuna Blue is a better option than getting two A150w spotlights, but its PAR output is more inline with the equivalent of a 75 watt multichip LED which doesn’t exist, so a little more than a 50 watt but a lot less than what you’d expect from a properly driven 100 watt multichip LED spotlight.

The Tuna Blue is a little bluer light than you’d use for SPS corals so if you want warmer, “bright” displays dominated by SPS corals, or if you want more features like dawn/dusk, automatic dimming and timer functions, a full fledged LED fixture is still the better ticket. However for sheer useful coral coloring and growing light, especially for popular LPS, zoanthids and chalice corals, the Kessil Tuna Blue in its A350 and A350w flavors are one of the best LED packages in the aquarium hobby. 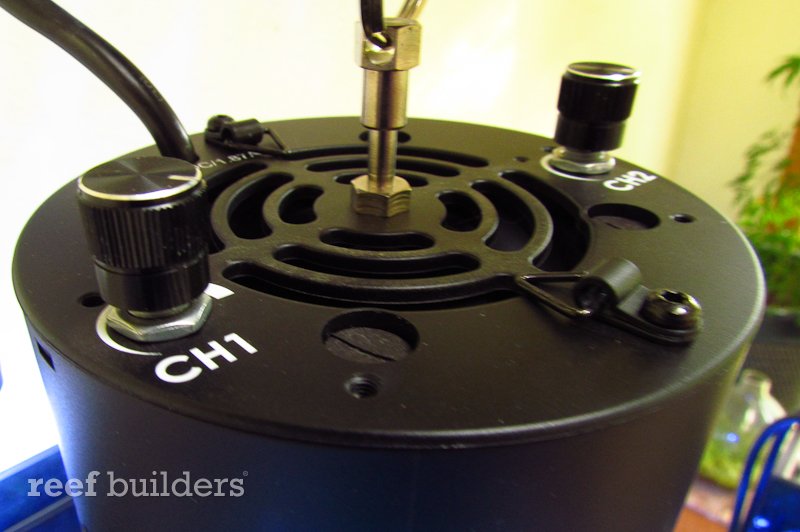 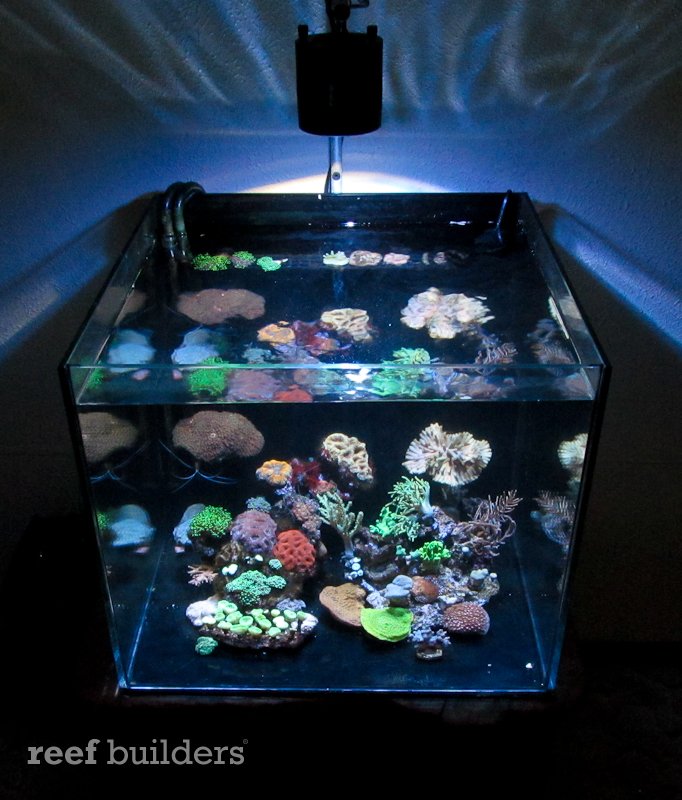 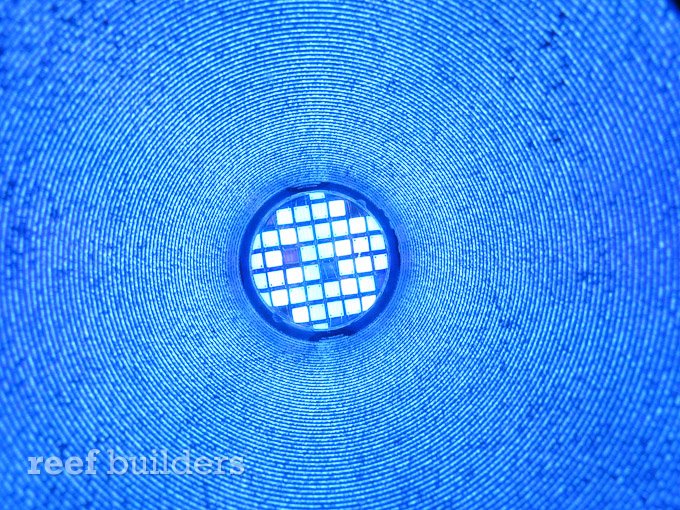 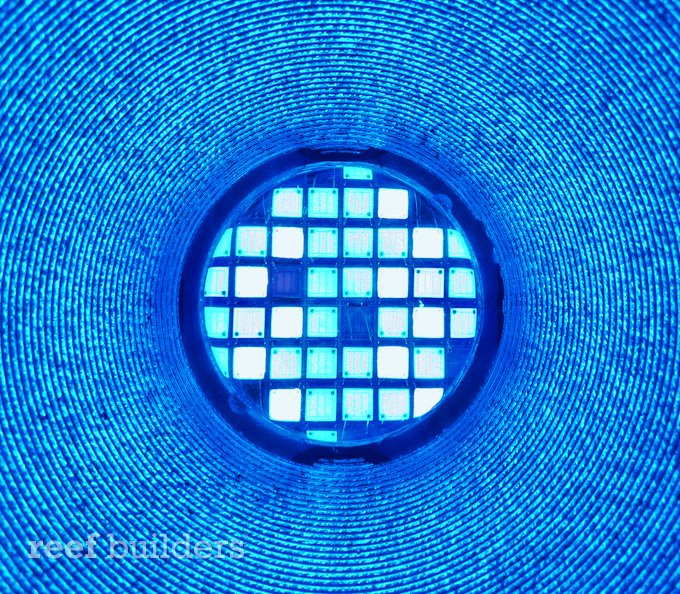 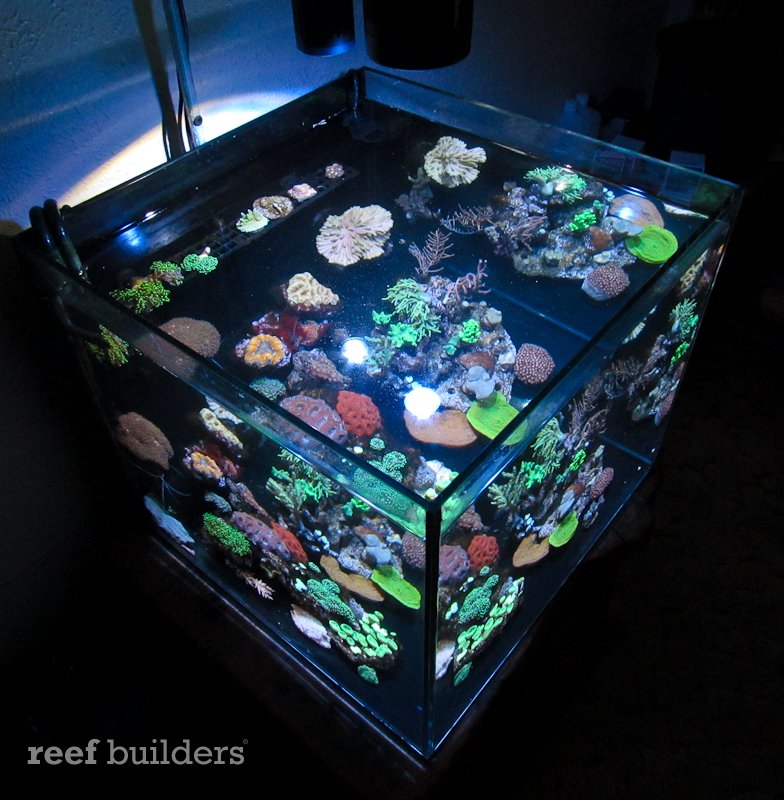 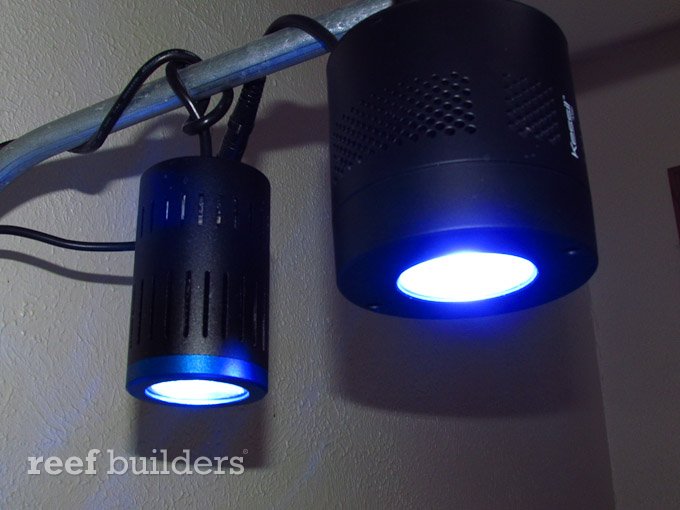 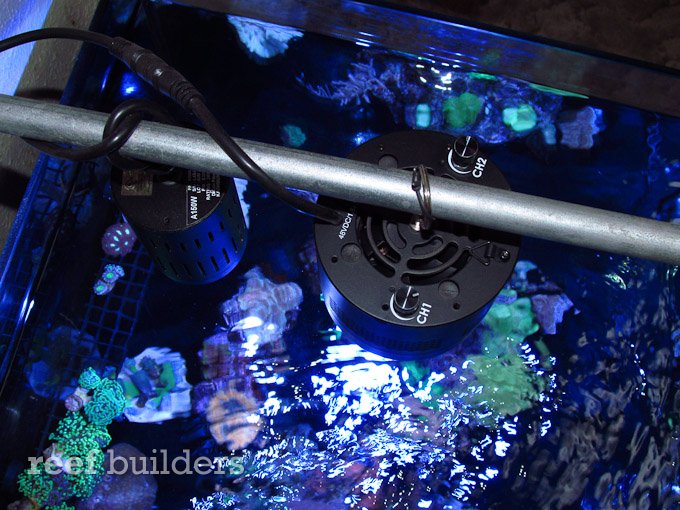 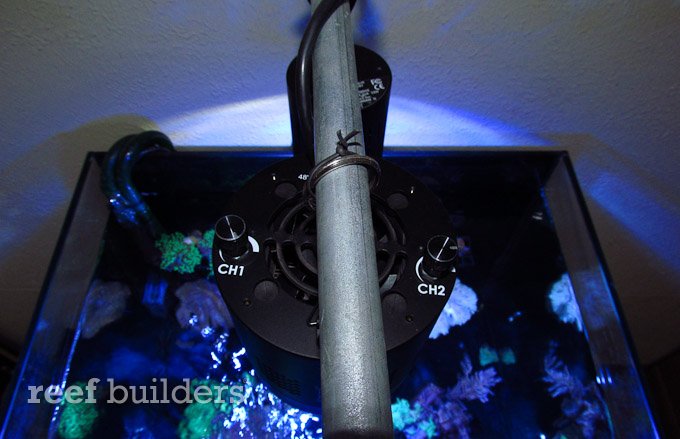 BEST PRACTICES FOR INSTALLATION AND MAINTENANCE

MANUFACTURER WARRANTY
Kessil warrants, to the original buyer, all of its products to be free from defects in both workmanship and material for a period of two years from the date of purchase. Kessil will replace or repair to proper working condition any products that are returned under warranty. Products repaired or replaced under warranty are only warranted for the remaining unexpired period of time of the original warranty.

Yellow polyp orange cap - who knew that montipora came in this color?